Astrobiologist Cyprien Verseux is a member of the one-year Nasa HI-SEAS IV mission. Here, six scientists and engineers live and work in an 11-meter-diameter dome in perfect isolation on the slopes of the Mauna Loa volcano, in Hawaii. Everything they do emulates future crews on Mars to test psychological factors involved in, and technologies developed for, such missions.

Make sure to follow the crews' project for ongoing updates "from Mars."

Yesterday, I broke a flask. A little glass flask, which slipped from my hands. A cheap flask, easily replaceable, that I would have quickly forgotten about under normal conditions.

But I am not under normal conditions. I am writing from a 36-foot-diameter white dome, on the slopes of the biggest volcano on Earth. I have been living here, together with five other people, for the past eight months. Since we arrived, I have not seen or spoken to anyone else, and I haven't been out in the open air. Showering is a luxury, limited to less than two minutes a week. Our internet access is limited to a few websites necessary to our work. Almost everything we do is monitored, with a complex set of devices ranging from video cameras to electronic badges we have to wear all day. 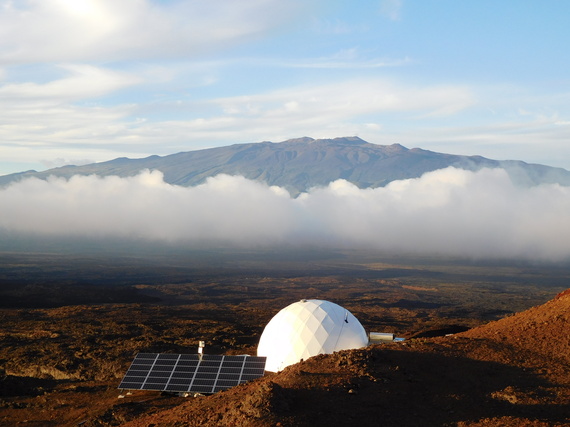 What crime did we commit to be confined here? None. It's even worse: we applied for the privilege. But I should start from the beginning.

My name is Cyprien Verseux, and I am an astrobiologist. That doesn't mean that I came straight from outer space with a lab coat, but rather that my day-to-day concerns deal with the origins, distribution, and repartition of life in the universe. Among others, I am working on making future human outposts on Mars as independent as possible from Earth, using cyanobacteria (green bacteria which, like plants, undergo photosynthesis) to process Mars's resources into products needed for human consumption. In other words, I am figuring out how to live on Mars off the land using biology and what is already there, in preparation for future manned missions to this planet. I am currently doing this as a PhD student co-directed by Lynn Rothschild of the NASA Ames Research Center (Moffett Field, California) and by Daniela Billi of the University of Rome II (Italy). More details on this project, called CyBLiSS (for "cyanobacterium-Based Life-Support Systems") are available on ResearchGate; that's not today's topic, but that's what led me here. 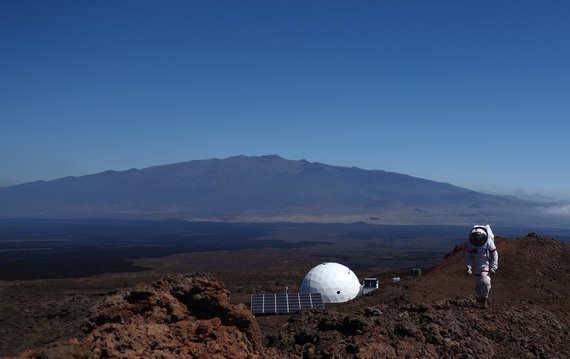 You see, I want to develop systems that actually work in the field, not just theoretical ideas that look good on paper. But how can you get a clear idea of the real constraints of a mission to Mars when you're sitting comfortably in a big, well-equipped lab, with suppliers a few clicks away? How can you imagine the way the psychological state of astronauts will affect how they use your system, if you know that all the stress you may have experienced today will be dissipated by a jog in the nearby forest, or by the nice dinner you will share with friends in a few hours?

To be able to develop a system relevant to astronauts on Mars, I needed to live like one. That's why I applied to HI-SEAS IV, a one-year mission funded by NASA's Human Resources Program and lead by Dr. Kim Binsted of the University of Hawaii. The main goal is to develop strategies to make sure that the first humans traveling to Mars remain competent and sane. NASA foresees the first trip to Mars in the mid-2030s, so it is time to find ways that ensure the limiting factor will be technological and not psychological. Other projects, aimed at testing and developing technologies to address other aspects of a trip to Mars, take advantage of the mission. CyBLiSS is one of them. 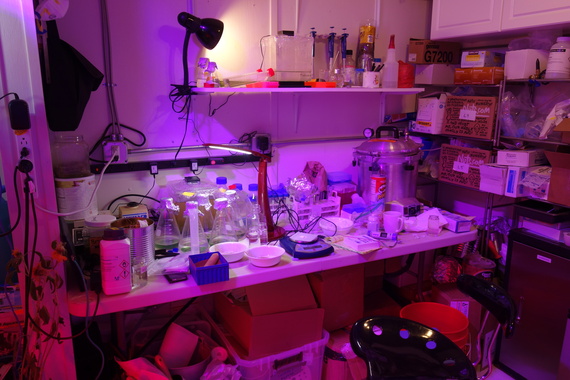 That's how I ended up here, where I broke a flask. As I have not seen a shop in the past eight months, and the dome has no postal address, I will have to go without it. Without this flask, precious after all, that was part of the limited supplies we have here. Researchers on Mars will have to face constraints which are unusual to a typical western laboratory. Here, I am getting a taste of it.

First, the mass and volume of equipment I could bring were very limited. Partly because our lab here is smaller than the bathrooms of the labs I usually work in and partly because, on a real mission to Mars, every pound or liter will matter. So I have to work with as little as I can. It means, for instance, finding reusable alternatives to the disposable tools we normally use. Growing cyanobacteria in an aquarium turned into a bioreactor. Centrifuging tens of liters of liquid culture in 15-ml tubes (I'll let you calculate how inconvenient that is), because that is the maximum capacity of the centrifuge whose dimensions were acceptable for the mission. Performing microbiology work in the sterile volume generated by the tiny flame of an ethanol lamp (until the day after, thinking that you are not contaminating your samples seems like a matter of faith). Or, using empty bottles as a basis for a hydroponic setup for plants. 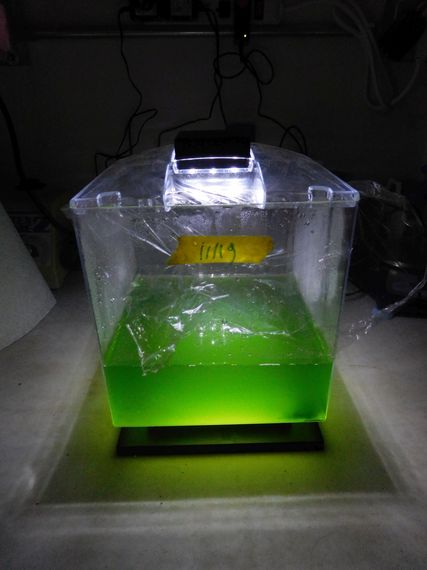 Second, the lack of access to the market. Remember, last time you applied for a grant, how you made a nice, detailed list of everything you needed for your project? You wrote the prices on the right and knew, to the dollar, how much the project would cost. You knew what supplies you were going to use... until your plans were confronted with reality. You used more tubes than expected because you had forgotten a control, you spilled a bottle of reagent, a colleague broke your glassware when dancing to the sound of his MP3 player, you realized that your brilliant idea was incompatible with the laws of physics and you needed to change your plans, your intern diluted the buffer into the enzymes instead of the other way around. In short, if you compared your initial list to the list of what you actually used, you may display an embarrassed smile. Now, imagine that you only had access to what you wrote on the list. You need some extra tubes? Too bad. You ordered the wrong reagent? Your loss. You need some extra supplies for an excellent idea you got along the way? They were not on the list.

You knew what supplies you were going to use... until your plans were confronted with reality. - Cyprien Verseux

Before the mission, I had to think of everything I would need for a year, down to the smallest detail. Then I had to cut it down to adequate volumes and masses. But in spite of this thorough planning, I often have to improvise. As an example: I wanted to grow cyanobacteria at room temperature. After all, I sometimes do it in the lab "on Earth." Except that there, temperatures often go down to below 20°C. Here, to save power, we wear sweaters rather than turning the heater on. Temperatures do not reach 10°C during the night, and are usually below 20°C during the day. So I put a lamp in an old incubator... that died after a month or so. I started to think that I could not grow large enough cultures in time to perform the experiments I had planned. Fortunately, when digging into our equipment, I found a piece of a thermostat and a ceramic heating lamp. By tinkering with some wires from an unused extension cord, an LED and a big box formerly used to store food, a crewmate and I put together a makeshift photo-incubator. As another example, we have a 3D-printer to manufacture a few tools we did not pack. 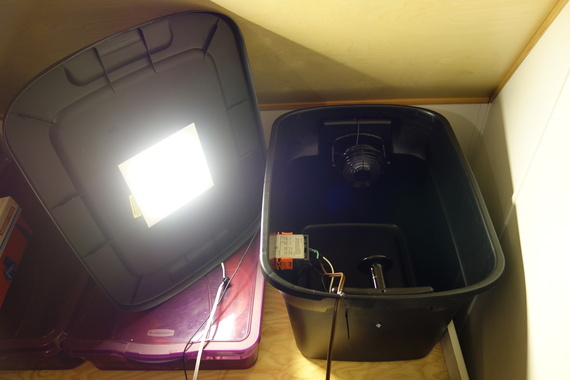 Another challenge comes from a lack of energy. No, not the post-prandial apathy that any researcher knows too well. The lack of electric power. Here, our energy mostly comes from solar panels (we have hydrogen fuel cells and a propane generator as backup systems, but with limited supplies). Before the mission, I assessed the power consumption of my experiments, gave up on some equipment, and finally found a solution that works... in theory. In practice, our power generation is quite unpredictable: we don't face dust storms as we would have on Mars, but we do get clouds. I often have to postpone experiments because we lack the power for running the centrifuge or the autoclave.

Other resources can become limiting. Water, for instance, which is very precious here. Or time: our busy schedules leave little time for our own research projects. And when I plan a several-day experiment, I sometimes have to start again from scratch because an unexpected and urgent task showed up. Information is lacking, too: we don't have a direct internet access, or any direct communication. The Mission Support Crew is extremely helpful and do their best to give us the specific documents or pieces of information we ask for. But even though this works great for news and recipes, it may be tedious when looking for scientific details which are probably hidden in a paper that is obscure to all but a handful of researchers. Getting information that we could find in less than 15 minutes "on Earth" can take days here, especially given that our emails have a 20-minute delay in both directions to simulate the 4-to-24-minute delay necessary for Earth-Mars communications.

How do you feel after spending an entire weekend at home, without going outside even once? - Cyprien Verseux

Mental energy and focus can also be difficult to gather. How do you feel after spending an entire weekend at home, without going outside even once? Imagine spending months there. Because of the lack of open air and the monotony, we sometimes have to fight a tendency to slow down. Fortunately, there is a fix: running on the treadmill. It does not clear your mind as well as a run in nature, but it greatly helps when your brain refuses to cooperate and just wants to update your mailbox for the tenth time this hour. And to focus in spite of the five people you can always hear (sound insulation is pretty bad here), headphones with white noise work great - a solution I found when working in an open space in Rome, where two people at two opposite sides of the lab can speak passionately about what they had for dinner.

The way we experience and overcome those constraints is thoroughly documented, so as to better organize future Mars missions. It shows how much automation, versatility of equipment, ability to produce unanticipated tools on-site, low resource consumption, and reusing and recycling of supplies that are currently disposable, will be important. But it can also teach us a lot about how we could work on Earth. Research - notably in biology labs - typically consumes impressive amounts of resources. As an example, the bioscience department of the University of Exeter released close to a metric ton of plastic waste per lab scientist in 2014. At a time when fossil resources are quickly depleted and our environmental impacts are increasingly concerning, a great shift is needed in the way we perform research. Inspiration for new approaches could come from research supporting manned space exploration: when managing resources efficiently is not an option but a necessity, people find solutions that they would not have imagined otherwise.