AUGUSTA, Ga. – The storm late Tuesday that felled trees and swamped bunkers across Augusta National was either prologue or postmortem for the week to come.

Pyrotechnics have become a Masters specialty with last year’s frantic final nine holes the undisputed category leader. The final two hours of last year’s tournament included an eclectic mix of eight different players who held at least a share of the lead, a monumental collapse, an historic finish and more pine-rattling roars than one should honestly expect, even at the year’s first major.

So the question remains, can the venerable layout produce another “instant classic,” as club chairman Billy Payne called the 2011 finale, or will Tuesday’s storm be the week’s most spectacular show?

Given recent history safe money is on Augusta National’s side.

Even last year’s champion, the previously little known Charl Schwartzel, made magic from mayhem, opening with a 100-foot chip-in at the first hole that many players have said is the hardest shot on the course, and closing with four consecutive birdies for a two-stroke victory.

Conventional wisdom would suggest the sequel is never as compelling as the original, but then Augusta National is adept at exceeding expectations and the cosmic tumblers certainly seem to be falling in the Masters’ favor.

For the first time in recent history there are three legitimate favorites heading into Thursday’s opening lap.

The last two years at Augusta National Woods has gutted out fourth-place finishes on a “one-dimensional swing” and a litany of personal issues and nagging injuries. But those days seemed like ancient history when he spoke with the media on Tuesday and compared his current game to the world-beater swing he ruled golf with in 2000.

“I understand how to play the golf course,” said Woods, who is playing in his 18th Masters. “I’ve spent half my life playing here.’

But if style points go to experience then Phil Mickelson may be the more compelling pick.

If the “significant changes” to the layout in 2002 did in fact “Tiger proof” the golf course, then it’s not a reach to contend that they may have also made the Georgia gem “Phil friendly.”

Since the changes, and the addition of more than 400 yards, Lefty – who is playing in his 20th Masters – has won all three of his green jackets and has finished outside the top 10 just twice. That Mickelson won earlier this season at Pebble Beach paired with Woods on Sunday only fuels the possibilities.

The two have been paired together on a Sunday before at Augusta National, most recently in 2009 when Woods tied for sixth and Mickelson was fifth, but they’ve always been on the fringe of contention, never mano a mano when it mattered.

“(Tiger) has obviously been playing well and to have won heading in gives him a lot of confidence,” Mickelson said of a potential Sunday showdown. “Sucks for us, but . . .”

Yet if a Tiger vs. Phil marquee is atop the wish list, Tiger vs. Rory is a close undercard.

Woods and McIlroy have been on a collision course ever since the 2010 Ryder Cup when the Ulsterman boldly figured that he liked his chances against the slumping star.

McIlroy further added to this week’s subtext when he set out for last year’s final round with a four-stroke lead, made the turn 1 up on the field and proceeded to hit his tee shot at No. 10 where no man, and certainly no champion, had ever gone.

Asked on Tuesday if he’d spent much time thinking about his wayward tee shot at the par-4 10th hole, which hit a pine tree and ricocheted back between two cabins barely 50 yards off the tee, McIlroy shyly admitted he’d revisited the episode during an earlier scouting trip to Augusta National and has moved on.

“I glanced over as I walked down the fairway,” he laughed. “I can’t believe how close the cabins are. They are only 50 yards off the tee. Look, it’s great to be able to laugh about it now.”

It wasn’t that long ago that some wondered if the club had circumvented the back-nine buzz that has defined this tournament. In consecutive years (2008 and 2007) cold, windy conditions on Sunday combined with few birdies to produce relatively pedestrian finishes. But that changed in 2009 with the tournament’s first three-man playoff since 1987 and Mickelson put on a show in '10 for his third victory followed by last year’s fireworks that finally ended the debate.

More so than any other venue in golf these finishes are as contrived as a true competition can be. Sunday’s traditional hole locations are cut into valleys that feed golf balls to birdie range and state-of-the-art drainage and new technology mitigate whatever curveball Mother Nature can hurl.

In short, no other golf course in the world changes as much as Augusta National from Wednesday to Thursday.

In professional sports things rarely go to script, and no amount of technology or timely performances can guarantee a great finish. At Augusta National, however, the improbable has become strangely possible. If history holds, Tuesday’s storm will likely turn out to be the opening act for another Sunday show. 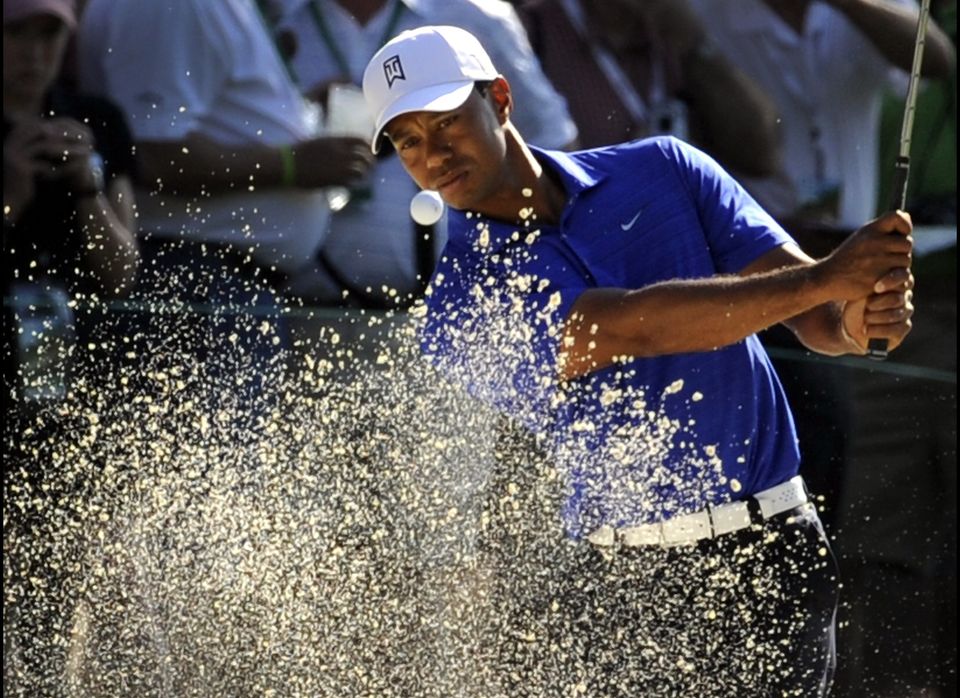 1 / 25
Tiger Woods - 4/1
Tiger Woods during a practice round prior to the start of the 2012 Masters Tournament at Augusta National Golf Club on April 2, 2012 in Augusta, Georgia.
Getty