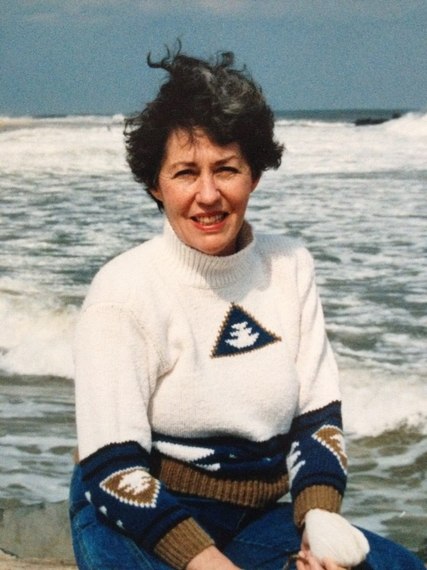 My Mom, Bernice McCarthy, the Irish-Catholic-Marie-Kondo

I'm one of seven kids -- five girls and two boys. My siblings and I were like the rainbow coalition for white people. There were 3 brunettes, 2 redheads, 1 blonde, and 1 with jet black hair. Eye colors ranged from blue, brown, grey, green, or hazel. Then there were the freckles: some had a mass of them, some had them sprinkled across their nose like flecks of cinnamon, still others had none -- just deep, dark, tinfoil-covered-album-hey-let's-put-a-beach-chair-on-the-roof kind of tans. And our personalities? They were even more diverse than our appearance.

So you can imagine that this was one, big, chaotic and very-messy, Irish Catholic family.

Like The Konmari Method, The McCarthy Method had very strict rules.

RULE #1 ASK YOURSELF THIS: DOES THIS SCREAMING 2 MONTH-OLD SPARK JOY? If not, purge a closet, put a crib in it, and promptly have another kid. (That's why we had Irish twins.) Once they're out of the closet, simplify their hair routines. Give all 5 girls a short haircut. Then call it this adorable sounding name, like "Pixie". (Whoever invented the Pixie was a marketing GENIUS -- no need to dry, style, or even brush your hair. More importantly, it prevented your sisters from pulling it.) The Pixie was a game-changer.

RULE #2 ORGANIZE YOUR KIDS BY CATEGORY and put a label on each. That way you'll never have to look at their homework before signing it. There's the Creative, the Beauty, the Brain, the Will-Be-Mad-If-I-Publish-It, the Son -- I know, even though there are 2 boys -- the Baby, and everyone's mascot, the Mistake. I was the Brain. For years, I thought I had them all fooled. Now I'm certain of it.

RULE #3 PAIR EACH KID WITH A PARTNER so you never have to play with them. Then rhyme their names so it's easier to remember them. So there was: Patty and Cathy; Sharon and Erin; Bobby and Crissy; and Sean. Sean, the mascot, the Mistake, was 18 years younger than me. There's such finality in his name -- Patty-Cathy-Sharon-Erin-Bobby-Crissy - SEAN! That's because in the delivery room, my mom got her tubes tied. (In a nice, little tidy bow, I imagine.) The McCarthy Method was efficient and holistic.

RULE #4 DRESS YOUR KIDS IN UNIFORMS
The Irish Twins, Patty and Cathy, always had the red dress, Sharon and Erin had the very same one only in blue. Even my parents got in on the act, wearing the same, exact clothes: matching navy blue Izod shirts with matching red, blue, yellow, and white madras slacks, just in case no one saw them. (No wonder I'm still single! My parents were cross-dressers!) I'll never forget the gasp restaurant hostesses would make when the station wagon full of Bobbsey Twins pulled in, looking like they were on their way to a twin convention.

RULE #5 ADOPT A MINIMALIST PARENTING STYLE
Confuse your kids into submission. Label their behavior as simply "Maze Bright", the right thing to do, or "Maze Dull", the wrong thing to do. For years I worried that I, the supposed "Brain", was really Maze Dull, until I realized I had no idea what it meant. So I consulted my favorite peer-reviewed, medical journal: Wikipedia. Apparently the concept of Maze Bright and Maze Dull was from a study on selective breeding. It determined that genetic traits accounted more for behavior than environmental conditions. Now I know where my Dad was going with this: "Ohhhhh noooo, poor parenting skills will never be the reason our kids turn out the way they do." (BTW, he was right: because I am, ahem, great! -- The Favorite!)

It also said the brats were red, oops meant RATS were BRED to be either Maze Bright or Maze Dull by, get this -- interbreeding! So I finally have an explanation for why I have a "brother" 18 years younger than me. (I know what you're thinking: "That's disgusting. No sibling would ever say that." Well I just did.)

RULE #6: SIMPLIFY SEX EDUCATION
The McCarthy Method was unequivocal: JUST. DON'T. DO IT. I mean, the education part. Say almost nothing to your daughters. Instead, give all 5 the same middle name - Marie. Tell them they're all named after the Blessed Virgin Mary. Then pray. A lot.

There you have it, The McCarthy Method, whose true legacy is this:
• Once a sibling, always a sibling
• The joy we feel when we're all together (Which is NEVER!)
• Lasting results
In fact, The McCarthy Method is far more effective than the alternative for Irish Catholic families -- The Rhythm Method.

This essay is dedicated to my mom. Part Lucille Ball, part Doris Day, my mom believed in the life-changing magic of family. I was lucky to have had her as my mom, lucky that she gave me such great siblings.