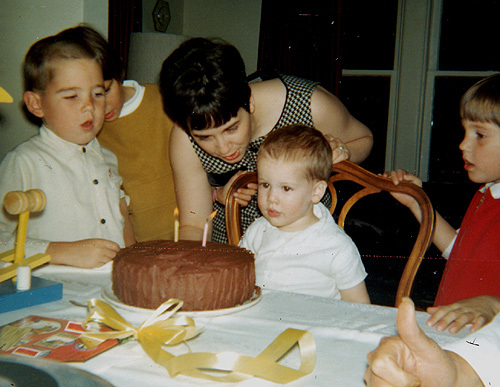 Oh sure, she looks innocent enough as a 22-year-old mom. She took great pains to perpetuate the illusion, showering me with exotic presents like wooden mallets and fancy ribbons, my favorite chocolate cake, even my cousins Pat, Sharon and Susie standing by as witnesses on my second birthday.

I can see it so clearly now; I was already on my way out -- like the crooked candle on the right. Somewhere out of frame, lurked my replacement fresh off the assembly-line -- the 1966 Katie.

And in two years it would be official; the election results would be in. Ann Walsh, by unanimous decision, would be voted the "Meanest Mom on the Block." Apparently, when she was informed of the official tally she was reduced to tears. My misdiagnosis of my mother's parenting style came back to haunt me in a tattered album that I'd pretty much ignored most of my life. 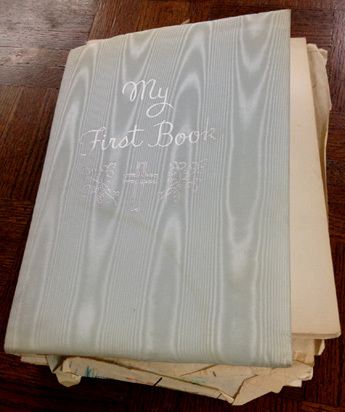 It's really a blue over-stuffed fortune cookie, predicting much of my years -- written in my mom's unmistakable hand that hasn't changed.

On the page outlining education, she noted...

My very first teacher in the pre-preschool days died suddenly in November -- a terrible event for a child of any age. But my only real memory of that time is my mom's reassuring hand as we walked up the hill to school and I entered the classroom to meet Mrs. Hurst. That transition was necessary; I needed that escort into the room for the safe hand-off.

The accuracy of her observation on the bottom of the same entry, "extremely sensitive to making mistakes" couldn't have been more precise. Even during a recent annual review of my department at work, the auditor smiled at the nearly 50-year-old man across the desk and said, "You seem nervous, Kevin. Relax."

I'm not sure where I became so terrified of mistakes, but she offers more insight on another page.

I still like Petula Clark's "Downtown" and have it on a number of playlists -- along with, I have to admit, the "Batman" theme song. I still have the creepy elves picture down in a box in our basement, too. But Humpty Dumpty? I have no recollection of a Humpty Dumpty--until I scanned this picture of my nursery at high resolution... 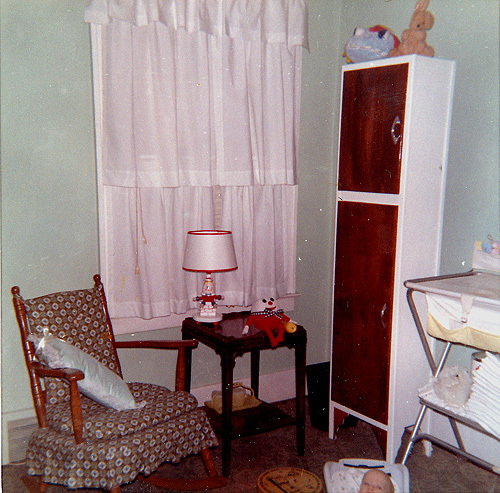 Lurking above my head like a Chucky doll, there it was beside a matching Humpty Dumpty lamp completing the ensemble of doom. 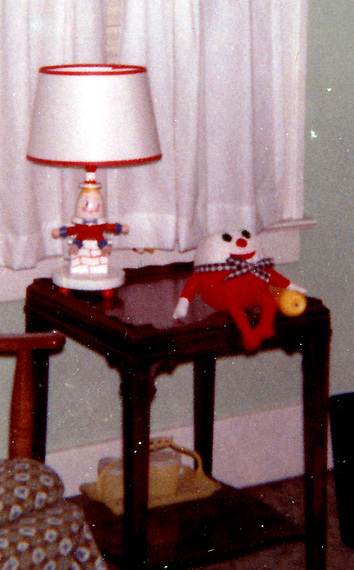 The anxiety and, sometimes, terror I've felt throughout my life of never being able to put all the pieces together again made this my perfect mascot-a smiling, oblivious Humpty before his great fall.

When I was a teenager, my mom told me about being voted Meanest Mom and weeping over her crimes -- which was obviously my intent over some injustice like being asked to come inside for dinner.

"I figured I was doing everything wrong since you were the first and we were so young. But by the time Maureen told me the same thing, I just laughed and said, 'Good!'"

When I was five she was already feeling plenty confident about her abilities and made some tough decisions. The first was holding me back a year when she noticed that her son was coming home from kindergarten with stomach-aches. As I've written about before, she didn't pick the easy path of just letting me cry it out. She knew her kid well enough to let him sit on the wall one more year, regardless of what all the kings horses and all the king's men had to say.

The next year, I loved kindergarten.

After a successful first grade (with the dry-humored Mrs. Dolly whom I adored), my parents decided to enroll me in the local Catholic school. The entry in the book explains it all. 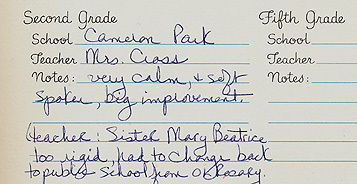 Sister Mary Beatrice. I can still see her frowning down at me in my cramped wooden desk. I can still smell that terrible textbook with the cryptic title: "Phonics." What was a phonic, anyhow? Which bus was mine in the parking lot -- there appeared to be 75 of them ready to deliver me hundreds of miles from my home.

The Worst Mom on the Block decided to make an immediate change a week later, I was back walking two blocks to Cameron Park Elementary where the sun seemed to shine a little brighter. (Envision 15 nuns not singing with Julie Andrews, but shaking their heads at the fallen young mother.) But even visiting the now-abandoned school a couple years ago, I still felt safe. 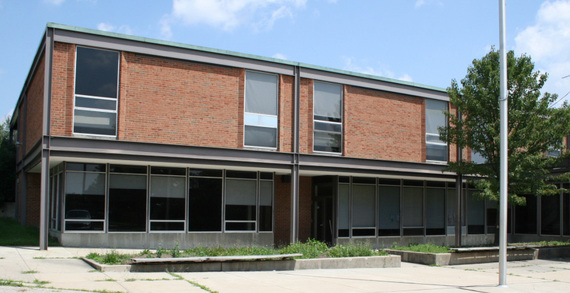 On another baby book page, under "Favorites," my mom predicted this very post.

I still love pictures in albums and the stories they tell and owe more to my mom for this type of memoir-writing than I realized before this morning. I don't recall much drama during mealtime grace, however. I do remember my mom laughing and correcting me, informing me that the auctioneer-speed that I recited the pre-meal prayer ("Blessusohlordandthesethy...") wasn't actually asking God to bless the "guests" we were about to receive but instead, in a much less cannibalistic manner, the "gifts" we were about to receive. But then, she boldly noted, that we could go ahead and thank the cook of the meal as well as the Lord. 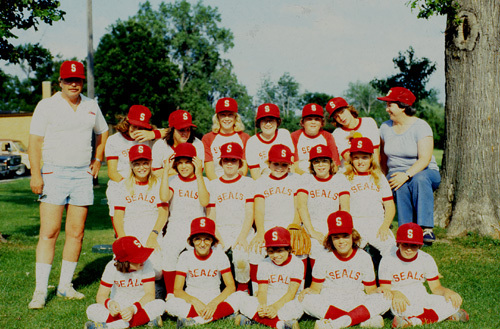 Without knowing much about baseball, she agreed to be the coach of the Seals, my sister's hardball team. She battled the usual prejudices one would expect, patiently dealing with the same head-shaking the nuns gave her -- all the way to the World Series trophy. I still bump into players from that team who tell me how much my mom meant to them.

In the middle of my senior year of high school, my mom finally had apparently had enough of me carrying on about college, my exams, my future, blah-blah-blah. She took a deep breath, looked me in the eye and said, "Would you relax. Why don't you just join the Navy if you're so stressed out?" I didn't want to hear that then and probably told her again why she was still the meanest mom on the block. But I know that precise use of those sharp, sober comments has rescued me a thousand times as a father and teacher.

When my dad died and we were beside his bed in the hospital, she gripped my hand tightly again, like she did on that long walk back to my kindergarten class: "Well, it's not going to get any worse than it is right now." The next morning, she didn't know what to do next and she heard a voice that replied, "Massive healing." And those frank assessments, coupled with her warm hands, made the next week bearable for me and hundreds of others as we grappled with such a tremendous loss.

Clearly a large majority of the attendees at the funeral home were cousins, friends and Clawson High School staff and students who were there for my mom as well as my dad. And they all told me the same thing about her, "She's like my own mom. She actually cares what's going on in our lives and is there no matter what." 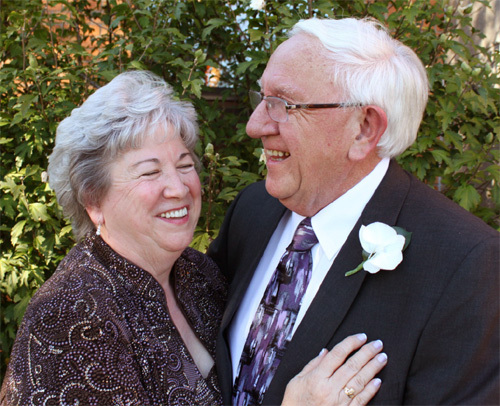 "How's your mom?" has been the question that has closely followed every "Hi Kevin" since my dad's death in 1997. And when she was able to meet and marry the amazing Patrick Quinn through some mutual friends who loved them both our joy in her joy was breathtaking.

It's too often we forget that hand on the back of our chair, lovingly supportive and making sure we don't fall from a stack of phone-books -- never to be put back together again. 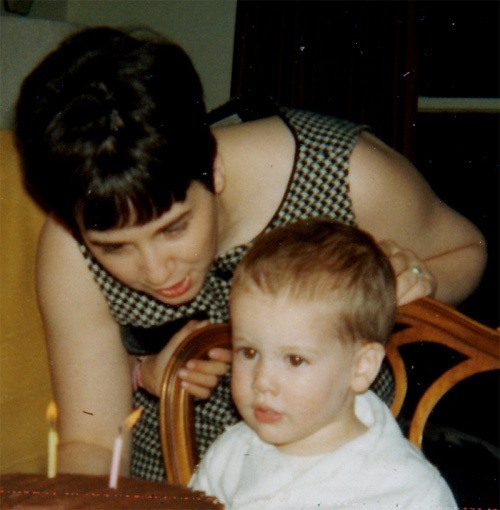 Happy Mother's Day to Ann Walsh Quinn from one of your four biological kids. We are all fortunate and proud to represent the hundreds of your other children who all call you Mom.