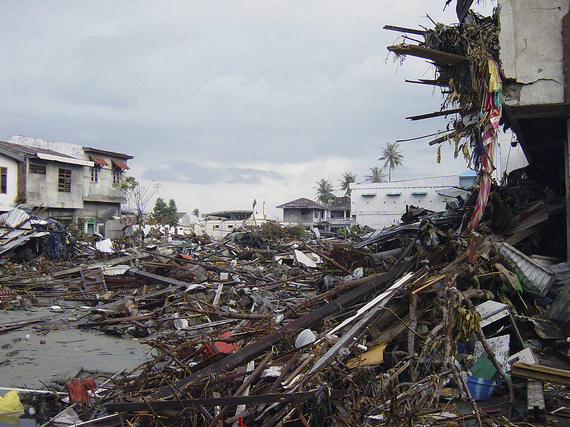 Years ago in my little town of Heavener, Okla., (population 1,800), an old man got gangrene in his left leg and had to have it taken off. It was an awful thing. He had diabetes and after years of treatment the only thing the doctors knew to do was to cut out the dying parts of his body to save the rest.

One night not long after that, at a reception after our town-wide Thanksgiving service, a well-intentioned preacher in the community commented out loud to no one in particular, that it was surely this man's sin that caused the nasty thing to happen.

''I knew him when we was boys,'' he said at the top of his voice across the snack table. ''He had too many women that weren't his wife, and now God's taken that leg off him to teach him a lesson about the wages of sin.''

That didn't sound quite right, but I was a lot younger than he was, so what did I know? But from somewhere behind us, Charlie Wilson, a grumpy Methodist and recovering alcoholic, who knew a thing or two about sin himself, yelled back, ''If God was in the business of ripping off legs when somebody messed around when they was young, then every man, woman and child in this town over the age of 15 would be walking with a limp today.''

That story came back to me this month, as we passed the tenth anniversary of the worst natural disaster in modern history. One decade ago on Dec. 26, 2004, a tsunami rose up in the Indian Ocean and covered thousands of miles of land, 11 countries, and took over 275,000 lives.

That's an incredible number of deaths and the suffering was beyond anything imaginable. In Banda Aceh, the hardest hit city, over 600,000 people lost their homes with waves reaching 65 feet high. It had the energy of 23,000 Hiroshima-level atomic bombs.

All of which made me think of that preacher in Heavener. It's a cruel theology, popular among some Christians, that when a person dies or gets hurt it is because God did it to teach us a lesson, or test us, or punish us for our sins.

But that belief is just wrong. And believing it sets us up for a terrible unbelief when we hear of an innocent father in Aceh having his equally innocent baby torn from his arms by the uncontrollable waters of one of the worst tsunamis in history. It is a theology that works fine when you are talking about God punishing Adolf Hitler or Osama bin Laden, but it stumbles badly when applied to tidal waves and dying babies.

When I was young, my parents divorced. Eventually my father met another woman, a sweet person who happened to be in Heavener visiting her family, and they got engaged. But then one evening--- one week before their marriage -- they were returning home from a party when two teen boys in a pickup, who had been drinking beer in a corn field, drove straight into them on their way back to town for more beer. They all were killed instantly. But as wrenching as that story was to me at the time, I am sure that God did not do it.

After my parents divorced, my mother married again to a nice man with silver hair and a Maine accent who loved her deeply, but who had a series of long and ugly strokes that ground him down and drained his life for five eternal years until finally he begged her to let him die to get relief from the horror of lifeless living. And God didn't do that either.

God doesn't kill people. Storms, tsunamis, earthquakes, and human beings kill people. God didn't cause the nightmares of Banda Aceh and Southeast Asia any more than God caused Hurricanes Sandy or Katrina or the 6,000 deaths (so far) by Ebola in East Africa. It is true that God is very much in the storms and wars, but God is there in the healing not the killing. God is in the mending not the destroying.

God does live and move in the midst of suffering, but as its resolution, not its cause. God is in the relief workers, the doctors, the volunteers, the soldiers, the helicopters, and in the heroic acts of countless nameless people who risked their lives, saved their neighbors and rescued survivors.

God's fundamental act in the universe is salvation, making the creation one, more whole, more ''good,'' and when the creation invariably fails or falls, God is in the midst of the hurt, working for some sort of reconciliation even in the brokenness.

Maybe when we ask, "What is the meaning of the tragedy?" we miss the point. Maybe "meaning" is actually something we give to an event after it happens. We make meaning from meaninglessness when we stick our lives into the healing, and it changes us. It is how we respond to an event that gives it meaning.

When Charlie made his uppity comment about God giving us all a limp to punish us for our sins, the preacher turned away in a huff, and I don't think they ever spoke again. I don't think he ever forgave Charlie for his radical theology. And I don't think I ever appropriately thanked him for it.