Irrational! How else can we explain the conducts of Putin, Netanyahu, Maduro, Jammeh, Kim Jong-un, Tsipras and ISIS? But to understand both the lure of "irrational" leaders and ideologies and the troubles of western liberalism, we must grasp people's subjective rationales, not assess their objective rationality.

We all grasp this intuitively, but in time tend to forget. In 1993, with her father on his deathbed, Hillary Clinton directly engaged the search for meaning in life and death as a political force. By 2009, she brushed off such notions; after all, "let's put ideology aside; that is so yesterday." Unfortunately, it would seem we still live in The World of Yesterday.

Rationality is tempting. It bestows a scientific aura on "us vs. them" -- we are rational; they are not. It boosts our sense of moral and practical superiority; rational is better, and shall prevail. Never mind that experts fiercely debate what rationality means, that the very idea of "rational choice" emerged to prescribe, not describe, people's decisions, that its pristine theory is subjunctive (let's imagine people as rational), and that our behavior regularly defies "rational" expectations -- we still seek refuge in ascribing rationality to, or denying it from, people around us. Remarkably, the sort of rationality we usually employ is not even uniquely human; chimpanzees likewise engage in seemingly calculative, material maximization, and are similarly prone to its fallacies, like "loss aversion."

What then sets us apart, and brings us together, as humans? This is, after all, the more fundamental, and illuminating, "us vs. them." If we, Homosapiens, wish to live up to our titular "wisdom" (sapiens) we must probe "sapienology," investigate human exceptionalism.

It is a daring, perhaps dangerous move. It is tempting to dismiss the idea that humans are inherently unique as vainglory informed by the fiction of our creation in "God's image." Some scientists reduce human exceptionalism to the bare facts that "we're the only animals who cook food, and no other species is as destructive of its own and other species." Others go further, concluding, "There is nothing special about being human, any more than there is anything special about being a guinea pig or a geranium." Still, our interest in human exceptionalism is itself quite exceptional. Pigs and geraniums, as far as we know, do not contemplate their uniqueness.

Death begets the human in man. We live on the edge and always have. Such is the human fate; to know that death is inevitable, only its timing unknown -- unless we choose to bring it on. In The Myth of Sisyphus, Albert Camus provocatively stated: "There is but one truly serious philosophical problem, and that is suicide. Judging whether life is or is not worth living amounts to answering the fundamental question of philosophy."

The inevitability and availability of death are the wellspring of our sense of freedom -- the daunting, haunting, realization of fundamental choice. Thus, on the edge of life's gaping abyss, we become explorers in seeking meaning that transcends our transient life. No other animal asks itself "why should I live?" Humans do, and their answers have erected, and razed, cultures and civilizations. To soften the blow of individual mortality, we seek symbolic immortality inter alia through meaningful sociomoral collectives -- sufficiently large and long-lived to grant an individual the magic of eternity and sufficiently small to facilitate in-group coordination and a distinct, deep sense of belonging.

Ernst Becker, in The Denial of Death and Escape from Evil, suggested that "what man really fears is not so much extinction, but extinction with insignificance," and thus seeks to "earn his immortality" through meaningful sociomoral orders, "seen as structures of immortality power."
Death, life's only certitude, is a creative force, urging us to love and innovate, to hate, and to kill. We find shelter from death in a meaningful perpetuation project, a causa-sui, to gain justification and purpose in the semblance of eternity. Becker, however, also recognized that the causa-sui is "a lie that must take its toll," for "in back of the causa-sui project whispers the voice of possible truth: that human life may not be more than a meaningless interlude in a vicious drama of flesh and bones that we call evolution." Ultimately, our causa-sui is a fiction of our imagination, and has no existence without it. Still, while "there is a great deal of falseness and self-deception in the cultural causa-sui project... Cultural illusion is a necessary ideology of self-justification, a heroic dimension that is life itself to the symbolic animal. To lose the security of heroic cultural illusion is to die."

We often dodge this underpinning existentialism. Suicide is for the mad, read irrational; search for meaning is for the adolescent, read irrational. We, materialist and mature, can dispense with these follies -- and surrender our humanity. We have constructed elaborate pyramids of human need and greed, watermarked with a divine eye, forgetting that each pyramid is a vast tomb. 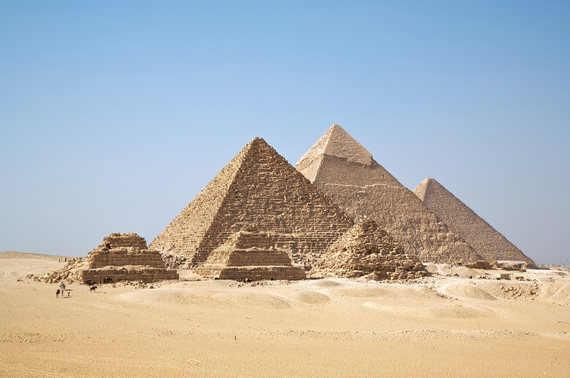 The world keeps reminding us. Nations are modern pyramids -- constructs of symbolic immortality, built for masses, not just monarchs. Falling bricks reveal the tomb -- and the best, and worst, in us. In his 1940 review of Hitler's Mein Kampf, Orwell commented, "The Socialist who finds his children playing with soldiers is usually upset, but he is never able to think of a substitute for the tin soldiers; tin pacifists somehow won't do." After all, "Human beings don't only want comfort, safety, short working-hours, hygiene, birth-control and, in general, common sense; they also, at least intermittently, want struggle and self-sacrifice." Hitler offered them exactly that -- danger, death and, however horridly, immortal meaning. His conviction that "the individual is transitory, the People is permanent" fueled the volk's drive towards the "Thousand-Year Reich."

The same goes for ISIS' nightmarish dream of a caliphate. Irrational? Perhaps, but profoundly human; no other animal is elevated by meaningful death to murder others. ISIS volunteers flee mental, not merely material, plight. Like Nazi Germans, they might say, "Better an end with horror than a horror without end." The West promises peace and prosperity, and many answer its call -- the mass immigration to the EU is just a recent case in point -- but without meaning in life, people will eventually look for it in death.

Quenching this existential thirst with banal humanism, with the axiomatic virtue of human life, misses the point: it skirts the question of "why should I live?" rather than answering it. Sanctifying human life for "man was created in the image of God," begs back the divine. True, the West's promise of liberty from external constraints is seductive, but for many whose hearts and minds we wish to win, that very seduction tarnishes liberalism. Ultimately, we have murdered God and mastered nature, but have yet to find meaning in a meaningless universe. Admitting this failure, our unbearable freedom, is the first step in living up to our humanity.