On Election Day, my grandmother Rose Orbach went viral. There was an article in the New York Times about how she had voted in every Presidential election since becoming a citizen in 1953. Unable to walk on her own, my uncle took her to vote this year. The NYT story spread on the interwebs, Facebook, and Twitter, and inspired thoughtful comments from strangers. While I never could have imagined my Safta the subject of tweets, she was deserving of that recognition and a lot more. This past Thursday, she passed away at the age of 104.

My Safta, i.e. grandmother in Hebrew, was a hero for me, not just for voting but for how she lived her life and what she did for others. She was an inspiration for her strength, determination, and dedication to achieving good things for her family, friends, and community.

As a young woman on the eve of World War II, she fled Poland for the Soviet Union. She and her family were interred in a Siberian labor camp, where she chopped down trees and cut firewood. After the war, when she departed Poland for America with her husband's family, she had to say goodbye to her surviving siblings and mother, not knowing if she would ever see them again. In the wake of the Holocaust and the remaining, post-war anti-Semitism in Poland, it is a heartbreaking scene that I have mulled over countless times.

When she arrived in America, Safta was a refugee, she didn't speak English, and she didn't know anyone but her new family. When my father and uncle were children, Haskel, her husband, passed away. As a single mother in 1950s and 1960s America, Safta raised two thoughtful, smart, and generous boys who share a deep love for Jewish life, learning, and community, and a civic and patriotic commitment to our country. As my father said yesterday at the funeral, she was a single mother for 59 years and 11 months.

Safta became a "small business woman" before that was even a term. She owned and ran a Midas muffler shop with my uncle Ed. They were successful because of their hard work and the decent way in which they treated their employees and customers. As a kid, I loved to visit and "work" in the shop - it is one of the many warm memories I have of time together.

In the same way that Safta dedicated herself to her children, she was a pillar of her community. For years, she volunteered at her synagogue, the Bay Terrace Jewish Center, organizing the kiddish receptions after services each week. To save the synagogue money, Safta shopped each week for eggs, tuna, and everything else that went into making egg salad or tuna salad for more than 100 people and then made the salads herself. That is a lot of mayo.

It is fitting that her commitment to the synagogue was in the form of food. Providing food was showing love. The meals at Safta's table were legendary. Her kitchen produced New York's finest kreplach and kneidalach.

It was actually at Safta's dinner table that I realized I was the smartest Orbach, well at least in a 3-card monte sort of way. I'm the least educated Orbach in my family, but I knew how to make my grandmother happy in the food department, and I developed a playbook for how to make sure she knew how much I loved and appreciated the meals together.

There was traditional sycophantism and hollering out compliments, but I also did subtle things like never eating until Safta got to the table. You didn't get credit for enjoying the meal unless she witnessed the act. That was harder than it sounds, because it usually took her at least 10 minutes to dish up the chicken soup, and she wouldn't let anyone help. Or, I would take a small first portion, because at Safta's table you were judged for your seconds, thirds, and fourths, and you received special credit for being the last one eating. I tried to share these and other tips with my brother and wife, but self-control in the face of those kneidelach was not an easy thing.

Some of my best memories with my grandmother involve my children. Safta and my son were both born in July, about 100 years apart. We had a couple of joint birthday parties when we lived in NY, and she took incredible joy seeing our kids play at the park outside of her building and watching videos of them on my uncle's phone.

Safta was the last of her generation in our family. She was one of seven siblings and of a generation that survived evil. She is survived by her loving immediate family and more than 100 nephews, nieces, great nephews, great nieces, and cousins. Her passing is a tremendous loss for all of us, and it marks a moment for which we remember the world that she was born into and reflect on the world that she has now departed.

I know how lucky I was to reach the age of 41 and to still have a grandparent. Safta was there for every milestone of my life that I can remember. She knit the skull caps for all the guests at both my and my brother's bar mitzvahs (more than 500 in total!), came to all of my graduations, set up a book talk for me at her synagogue, came to my wedding, and was there for the naming of my children.

With the opportunity of having so many years together, our relationship transcended the lovely yet traditional one of the spoiling grandparent and the indulged grandchild. Safta got to see some of the choices I would make with my life and to be a part of so many of them. For me though, I got to learn, from her, about the choices she made to live a meaningful life. 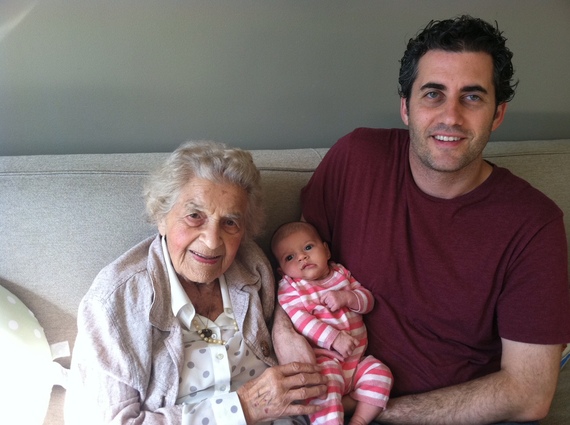 Benjamin Orbach
I’m a social entrepreneur, international development professional, and writer from Pittsburgh, Pennsylvania. In 2009, I founded America's Unofficial Ambassadors, a citizen diplomacy initiative that sends Americans to volunteer in schools and non-governmental organizations in the Muslim World and then helps them to share their experiences when they come home. We’ve helped thousands of people in 10 different countries (including the US!) and shared our stories with more than a million people this past year alone, hopefully changing some opinions along the way. I’m a former State Department official as well as the author of Live from Jordan (2007), a travelogue about living the American-Arab relationship 24 hours/day for a year in the wake of 9/11 and during the war with the Iraq.