As the discussions amongst world leaders on preserving a viable climate for our small planet heat up in Paris, a city still absorbing the impact of blasphemous violence directed at innocent civilians, in a continent challenged by refugees forced from their homes, in a world where the strongest states threaten the entire planet with nuclear annihilation, and irrational acts of violence beset the quiet enjoyment of normal life, let us, for a moment, listen to some of the coolest heads of some of the world's coolest people -- the Nobel Peace Laureates. 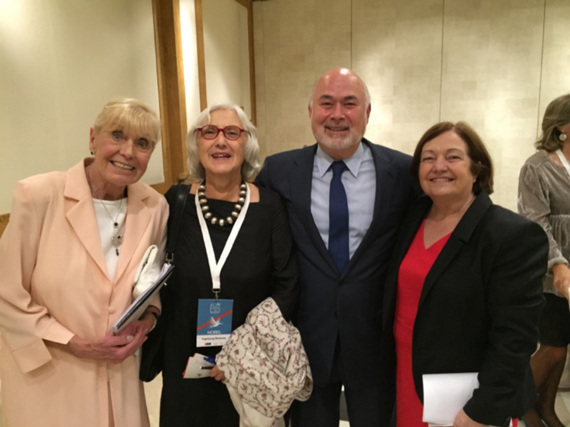 Last month the 15th World Summit of Nobel Peace Laureates crafted the Barcelona Declaration. They addressed the crisis of refugees and the violence of terrorism with a focus on positive policies focused on root causes. A measure of a civilization is how it treats the most vulnerable. From that perspective, it is necessary to look with compassion on the lives disrupted by the civil war in Syria, drug-driven corruption in Central America and Mexico, chaos arising from the invasion of Iraq and Afghanistan, and the poverty driven multiple crises arising in Africa from dysfunctional governance, the failure of the rule of law, hyper-exploitation, and environmental degradation.

Only by understanding based on reason and compassion without fear will wise policies emerge. Desperate people who come to one's country to seek refuge from oppression, violence, chaos, or poverty when welcomed wisely can bring enormous benefits. America is a nation of immigrants which has proven this point well. But when fear guides policies, walls and divisiveness result and harmony becomes unattainable. It is for this reason the wise counsel of the Nobel Prize winners is so important at this moment. For these are people who did not permit fear to govern their perception, their lives, or their actions.

Each year the World Summit of Nobel Peace Laureates organization
convenes individuals and organizations which have received the Peace Prize to address critical challenges to peace. It is humbling to serve the Secretariat of this endeavor and be amongst a group of people, many of whom have faced imminent death threats without permitting fear to deter them. 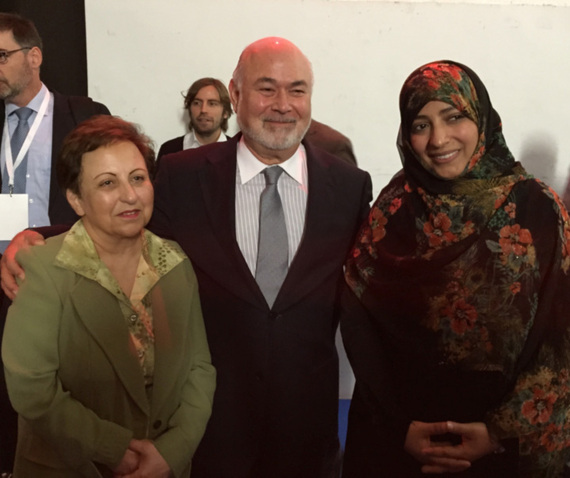 Several, such as Betty Williams and Mairead Corrigan Maguire who called the woman of Belfast to stand up and stop the violence in their streets, have consistently and without hesitation attributed their courage to an overpowering commitment to love. Their work opened a way for the political resolution of the conflict in Northern Ireland for which Lord David Trimble and John Hume received the Nobel Peace Prize in 1998. Seeing the two woman with Lord Trimble made clear that only when people of courage push for change is the social space created for political actors to create institutional change.

Others, like Shirin Abadi, the lawyer from Iran or Kamam Tawakkal the activist from Yemen are clearly guided by a profound passion for justice, human rights, democracy and gender equity. All, who attended the most recent Summit in Barcelona this past month, demonstrate an astounding humility toward the sacrifices and risks they have taken for others. From the shipyards of Poland, President Lech Walesa stood up and inspired thousands of others to stand up against the Soviet empire. President Willem deKlerk risked his very life by working closely with Nelson Mandela to peacefully end apartheid in South Africa. President Oscar Arias forged a peace settlement in Central America against truly astonishing odds and at the risk of his very life. Jody Williams, an American activist who received the prize for her work to ban land mines, continues daily with seeming infinite energy and passion to work to end militarism and violence in all its ugly dimensions. Peace is the currency of their lives and peace is both the solution and methodology of its achievement.

Also, participating were leaders of organizations which have done brilliant work for world peace and for which they have received the prize such as the American Friends Service Committee, the International Peace Bureau, the United Nations, International Physicians for the Prevention of Nuclear War, Pugwash Conferences, International Labor Organization, Intergovernmental Panel on Climate Change, European Union, United Nations High Commissioner for Refugees, and others. These organizations are populated with heroes for peace who do not receive public recognition, fame, or wealth but whose passion for peace guides their lives.

This is the full text of the Barcelona Declaration, which contains a substantive Appendix with in depth policy recommendations and analysis. An abbreviated version is below.

The Laureates' closing admonition is exactly the needed reminder that despite shortsighted calls for policies based on fear and the exclusive remedy of the applications of force, which can only deal with symptoms, wisdom compels deeper analysis and values. Wisdom addresses causes and not just effects. As the Laureates said: True personal, national and global security is found in the practical application of compassion. 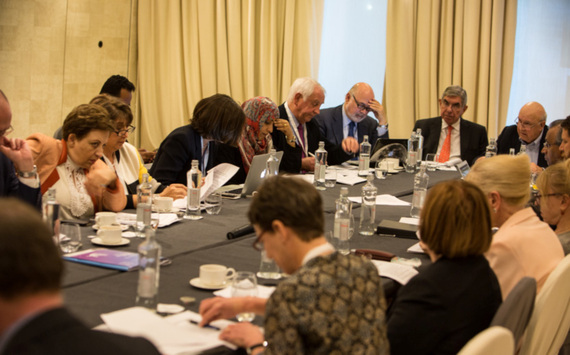 REFUGEES: MEETING THE CHALLENGE TO OUR HUMANITY

We, the Nobel Peace Laureates and Peace Organizations, in the presence of youth from all over the world, gathered together in Barcelona from 12 - 15 November 2015, have considered issues affecting world peace - with special emphasis on the current refugee and migration crisis.

We are profoundly shocked and outraged by the barbaric killing of more than 150 innocent people in Paris on the evening of 13 November. We express our deepest sympathy and solidarity with the families of the victims and with the people of France.

This outrageous attack stresses the urgent need to address the root causes of the current refugee crisis and insecurity in the world. This situation should not be abused to demonize refugees and the Muslim community.

As Nobel Peace Laureates and Laureate organizations we join with millions of individuals, organizations, communities and cities who every day make a difference by working for a better and more peaceful world.

We collectively raise our voices in compassion for the millions of refugees who have been forced to leave their homes. We affirm that the manner in which we honor and protect their inherent dignity and human rights is a measure of our own humanity.

We are particularly concerned about the plight of women and children whose lives have been devastated by conflict, repression and deprivation. We must and can eliminate the conditions that compel people to leave from their homes.

The refugee and migration crisis does not exist in isolation. It is a symptom of the broader problems that confront humanity that include
• continuing conflict in many countries;
• the consequences of militarism, extreme nationalism and the use of force and proxy wars by global powers in pursuit of strategic, financial and ideological interests;
• distorted religious beliefs that lead to horrific acts of violence;
• the failure of governance characterized by rampant corruption, persecution and the absence of democracy, basic human rights and the rule of law;
• the gross inequalities in opportunities and in economic and social wellbeing between and within the so-called developed and developing countries;
• the failure to accommodate, tolerate and appreciate the value of religious, cultural and ethnic diversity;
• the growing impact of climate change that will increasingly threaten food security and disrupt the lives of hundreds of millions of people in the most vulnerable societies; and
• the criminal exploitation of refugees by human smugglers.

We believe that many of these problems can be solved if the international community fulfills its commitment to achieve the 17 Sustainable Development Goals that nations have already adopted as the framework for a comprehensive, practical and achievable path to a secure and peaceful future.

We also call on the international community to
• address the root causes of the refugee and migration crisis while assuring access to asylum;
• redouble efforts to bring peace to Syria, Afghanistan, Iraq, Yemen, Ukraine, Palestine/Israel, Somalia, South Sudan, the Central African Republic and other societies in conflict in a process that includes the peoples involved - especially women - and concerned nations;
• denounce and reject the use of distorted religious doctrines and ideologies to justify violence by placing perverted beliefs above compassion and other universal values;
• ensure that refugee children have adequate access to education and health care;
• promote good governance based on respect for fundamental human rights and the rule of law;
• prevent ethnic conflict and repression by recognising the value of diversity and by protecting the rights of minorities;
• achieve and implement international agreements to combat climate change that bind all elements of society including government, business, finance and the military - with special focus on the forthcoming conference in Paris;
• identify and prosecute those responsible for human smuggling; and
• provide much greater support to countries bordering conflict areas which are hosting refugees - and underfunded humanitarian organizations aiding refugees.

True security will never be achieved by military force or by the possession and threat of nuclear weapons. It requires adherence to international humanitarian law and global cooperation in meeting the authentic needs of humanity. We call on the nations of the world to
• redirect each year at least 10% of annual military expenditure of over 1.8 trillion dollars to implement the programs required for the 17 Sustainable Development Goals;
• implement fully the Arms Trade Treaty and end illicit arms trading;
• put an immediate end to any new arms race - especially the modernization of nuclear arsenals and the pursuit of fully autonomous weapons systems; and
• fulfill the legal obligation to commence negotiations now to eliminate nuclear weapons.

True personal, national and global security is found in the practical application of compassion.

President Global Security Institute, UN Representative of the World Summits of Nobel Peace Laureates, and Ambassador for Peace, Security and Nuclear Disarmament of the Parliament of the World's Religions, Chair of the International Law Section of the American Bar Association's Task Force on Nuclear Nonproliferation