The new year is upon us and once again people are looking to improve their life, their body, and everything in between. One of the first things people focus on is their weight and diet. There are numerous diets out there to choose. Some good, some not so good. Some are man-made and some have been traditionally followed for years.

One of those diets that has stood the test of time, has been followed by real people and has the research to support it, is the Mediterranean diet. A non-restricting diet associated with numerous health benefits. And while it is a specific way of eating, it is also a way of living.

As a Greek-American Nutritionist and Writer, specializing in the Mediterranean diet, I have been asked numerous times how to follow this diet. As we know this diet was officially identified with the Mediterranean Diet Pyramid developed by Oldways, the Harvard School of Public Health and European Office of the World Health Organization. The scientists write that it was based on the diets the Greek island of Crete, Greece and southern Italy in the 1960s. In other words, the diet does have some specific rules and it does not entail a mix and match of the dietary habits of the whole Mediterranean area. There are more than 20 countries that border the Mediterranean Sea with very different cultures and religions that affect the diet. Some countries do not use olive oil as their main source of fat, while others do not consume wine, important components of the Mediterranean diet.

But even though researchers pinpointed where this diet was first identified, and documented the eating habits, it can be difficult to follow a diet in the exact same way as the locals did, in a different time and place. As a result, there was a need to provide guidelines on how to follow a Mediterranean diet in today's world. Unfortunately, in many cases the diet offered by many health professionals and the media was a watered down, Westernized version of the real thing. The problem with that is that the readers are not really following a Mediterranean diet nor will they be getting all those health benefits.

With that in mind I developed what I call the Mediterranean Diet Manifesto. Based on the scientific criteria that describe a Mediterranean diet, it is a set of goals and views one can have in mind when trying to follow a Mediterranean diet. It not only describes specific diet practices but also the social aspect, such as eating with other people, having a conversation while eating and sharing food. 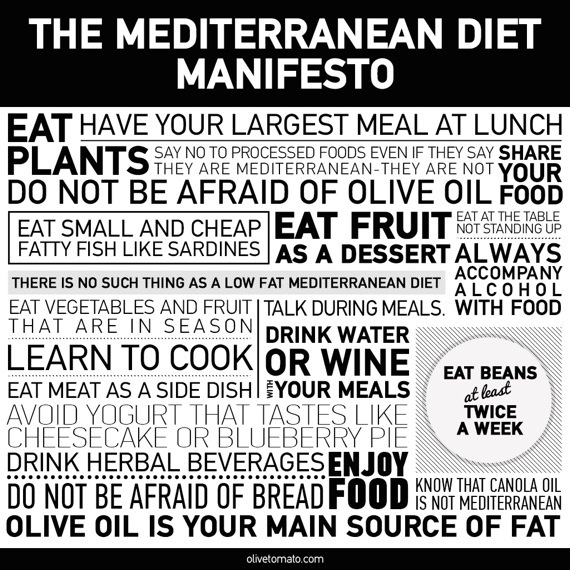 2. Have your largest meal at lunch.

3. Say no to processed foods even if they say they are Mediterranean -- they are not.

5. Eat vegetables and fruit that are in season.

9. Do not be afraid of olive oil

11. There is no such thing as a low-fat Mediterranean Diet.

12. Eat vegetables as a main course.

13. Drink water or wine with your meals.

18. Know that canola oil is not Mediterranean.

20. Avoid yogurt that tastes like cheesecake or blueberry pie.

23. Olive oil is your main source of fat.