Based on past productions, the Little Fish Theatre appears to have been custom made to feature plays set in cabins. Cozy, rustic (viz. pomp-less), and, for the audience (lucky us), accessible. Norman Foster's "The Melville Boys," directed by Paul Vander Roest, is no exception.

The show's perfectly paced. It begins frat kegger funny and then, almost in a whisper, becomes sad as hell. It ends neither maudlin nor tragic. Instead, to Vander Roest's credit, it glows with a gentle humanity: all four characters must (and do) come to terms with the one thing that no one who's ever lived can avoid.

It takes place over the span of a weekend. It features the Melville brothers, Lee (Bill Wolski) and Owen (Michael Hanson). They work together in a plastic factory. They come to their aunt and uncle's cabin, ostensibly, for some bro-time: beer, cheese puffs, and fishing, punctuated with an unplanned encounter between two sisters, local women Mary (Holly Baker-Kreiswirth) and Loretta (Kyla Schoer).

Sound like fun and games? It is. Owen, engaged to be married, wants to fish, have more than a few brewskis. Lee, married, with two daughters, is more stolid, is there seemingly to provide adult supervision to his quixotic younger brother. Similarly, Loretta is up for anything while her sister, like Lee, serves as an anchor. Sounds idyllic (and funny; and charming): skinny dipping and canoodling (Owen and Loretta), a dance at the Legion hall, a turnip cake (no one ate it, they were all filled up on all the other food).

But if Lee doesn't have a secret, then he at least tends to the biggest elephant imaginable in the room. It explains his solemnity, his behavior toward both Owen and Mary; and it makes you realize that everyone has a backstory. All four backstories not only explain character and define plot. They also propose that we don't judge people by their superficial propensity for either elder sibling seriousness or younger sibling frolicking.

The chemistry between the characters is flawless. All four actors play their characters with nicely pitched reserve. Of great interest was the simmering volcano that was Wolski's Lee. This was, after all, Lee's story. He wasn't bitter at what life dealt him. He just wanted his in-denial brother to tend to a few things (his wife, his two daughters) in the rudderless future. This made his one eruption effective because we saw that he wasn't as much concerned at what would eventually happen to him but what would occur subsequent to him.

Likewise with Hanson's Owen, Baker-Kreiswirth's Mary, and Schoer's Loretta. All three were funny, spontaneous, and amenable to a philosophy of what happens in the cabin stays in the cabin. But they weren't so over the top that their various concerns - hope that an errant husband would return; hope that an acting career would take off; hope that growing up meant not living someone else's life - overrode those of Lee. In light of the bigger picture, it wasn't such a bad philosophy after all. 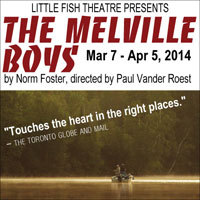