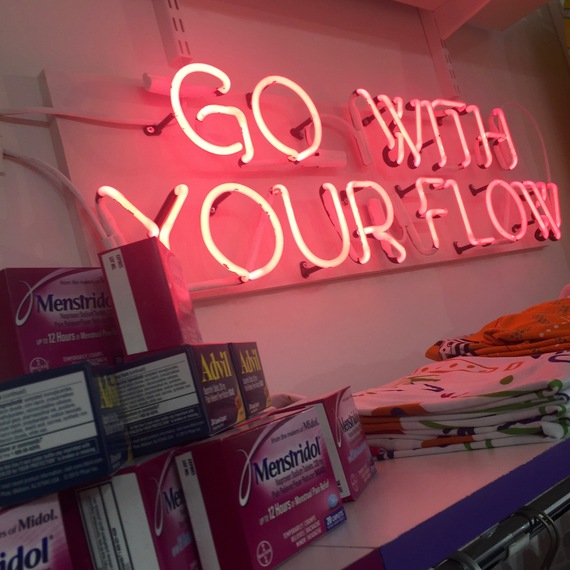 This past weekend The Period Shop popped up in New York City - part store, part girl cave, part happening, part marketing ploy. It's part of U by Kotex's "The Period Projects" - a new series designed to "make change happen." It certainly seemed an effective way to get people talking about menstruation. The pop up shop was all over social media and in news stories around the country. Yes, people were talking periods.

But, that isn't necessarily enough to change the conversation.

Kudos to Kotex for trying. The challenge though is daunting. How can you begin to rephrase dialog that's been going on for thousands of years? How do you change deeply ingrained mindsets based in negativity and fear? How do you overcome religion and governments and societies telling women they're unclean, incapable, not welcome because they bleed once a month?

Yes, that sounds like a gross exaggeration. Sadly, it's not. The Bible, the Koran, and Hindu texts deem menstruating women dirty. Today in some sects, men and women are still separated for fear of menstrual contamination. One hundred years ago the New York Times said women weren't capable of voting responsibly - menstruation rendered them too emotional. And hey, a certain presidential candidate recently questioned a moderator's efficacy during a national debate suggesting she might have her period. And all this has been reinforced by advertisers. For as long as femcare products have been hawked, fear, secrecy, and shame have been the main messages.

Back to The Period Shop. According to the illustrated pink and black newsletter I picked up - featuring a cuterus (a cute uterus) and a superhero tampon - the woman who inspired the installation wanted pajamas and manicures and chocolate. Check, check, and check. The pop up had period-themed sleepwear, nail art available including a pink V, a tampon on glitter, and pizza, and artisanal bars for sale. Often when talking about periods the answer seems to be escapism and indulgence. That's not necessarily a bad thing. But what struck me was, "I want a place where I can feel comfortable and respected during an otherwise shitty part of the month." Boom.

Posted on the wall, just as you walk in, those derisive words smacked you in the face. Periods suck.

There was nothing that remotely promoted constructive conversation about menstruation.

Except for the wall where people could fill in MY PERIOD IS (blank):

a cry for help

the worst thing ever

The comments weren't 100% negative. I did read non existent, it reminds me how female I am, nothing to be ashamed of. I watched a U by Kotex rep wipe away MAGIC so someone else could share her thoughts. But positivity certainly wasn't the overwhelming sentiment shared.

I was recently interviewed about a new product - a blue tooth sensor that would let wearers know when their tampon needed to be changed. Before I could even wrap my head around the device (I still haven't) I was stopped cold by a headline on their website:

Working Hard to Provide a Solution to Menstruation Mortification

There it was again. Profound negativity when it comes to talking about periods.

This company, working on an innovative product that could help women feel more in control, perhaps manage their cycles a bit better instead chose to highlight the nightmares of leaking in white pants and the possibility of toxic shock leading to amputation and death.

We are so subconsciously tethered to the idea that menstruation is a curse, that language and messages put out into the world almost automatically and continually trap us into believing that's true.

What if, going forward, conversation could just be open. Honest. Straightforward. What if we could talk about menstruation without gimmicks or cuteness, without making it the punchline or punching bag. What if we could gently let of of the weight of centuries of blame and trash talking, paranoia and shame.

What if we could leave that all behind and talk about our periods for what they are. Not what we've been conditioned to accept and expect them to be.

That would be true change.