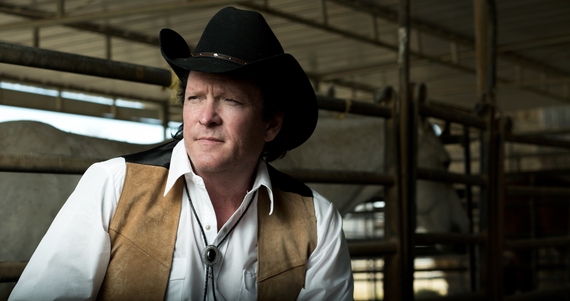 Who is Michael Madsen?

Better yet, who do you see him as? The badass in Reservoir Dogs, Donnie Brasco, or Kill Bill?

Let me tell you about the Michael Madsen I spoke with -- a man who is more than the sum of the parts we see him portray on the screen; he is a legendary actor who in essence becomes the character, no matter what type of person that man is.

Very rarely do we ever see focus on Michael Madsen, the family man, the poet, the artist, the classic film buff (he and I could go on for hours about that), and lastly the man who is a fine example in his display of humanity. This shows in the way he looks at things. He's a pretty funny guy too.

In a recent conversation, Michael and I ran the gambit -- from current events to upcoming projects. The day we spoke, we were only hours after the initial news broke of the Ray Rice domestic abuse scandal flooded social media, radio, and television.

"In this age of social media that we live in, people are convicted and given a death sentence before we even know the truth about what happened."

This of course was before the elevator video showing Ray Rice viciously knocking his wife to the floor was released by TMZ.

We spoke only days after the nude celebrity photo leak.

"I think they ought to have a nude celebrity day. Every celebrity would agree to snap nude selfies so that everyone's fascination with this can end."

While this is not likely to happen, it could be effective in desensitizing society to the fact that celebrities are actual people. Besides, who hasn't shared something a bit risqué with a loved one in a text message. Nude celebrity day, why not? We have Dating Naked on VH1, right?

"Can you imagine what would happen if someone were leaking nude pictures of Brad Pitt, or of me? It would be this weird thing, no one would care and no one would want to see them."

"I just had to get all of that off of my chest."

After allowing Michael to sound off, laughing, until my sides hurt, and discussing with him the hilarious absurdities of one of the most fascinating industries in the world -- we moved on to Michael himself. But, not before he kindly asked me; "Anyway, what's on your mind there, buddy?"

That's actually what I was going to ask you. I heard you did the ice bucket challenge in a rather creative way, tell us about that.

I dumped a bucket of quarters over my head, it was about $500 in change. I hadn't seen anyone do it that way. The reason I did it that way was because I was talking about the drought in California. Right after I did that, my son comes and dumps a big bucket of water over my head.

That's hilarious! You're extremely busy, always working, and all over the place. What else is going on with you, Mike?

The rumors of my demise are usually greatly exaggerated. If you're not in the latest blockbuster, then people think you've left the planet.

No doubt, I'm sure -- especially since I've seen many of the non-blockbuster films that you've been in. I know that you never stopped working for the better part of the last decade.

I've been working hard, man. I just shot a couple of things in Italy. I did a comedy series for Ben Stiller and Red Hour Productions, it's called Big Time In Hollywood, FL. I'm really excited about it. I did five episodes and I play this ridiculous detective. It's the first time I've ever done any broad comedy and I really had a good experience doing it.

I heard that you were in my neck of the woods in San Francisco shooting something, anything you're able to talk about yet?

I did a film with Christopher Coppola. He's a great director, we did a cop story with his son Daly who plays my son in the movie. Originally, it was going to be my son Christian, but he was unavailable to come to San Francisco. I really love this town, we were over there by where Zoetrope is. I loved it there.

I love San Francisco. Did you get a chance to do anything fun while you were here?

I was taking my wife and my 8-year old son on a tour of Alcatraz. I had gotten the time wrong, so we missed the boat. They were so nice, they put the three of us on that big boat and took us out for a tour by ourselves. It was pretty cool. They didn't have to do that, when people do things like that, you gotta love life, right?

That's awesome. I've lived in the Bay Area my entire life and have yet to go on Alcatraz it's pretty hard to book a time.

You have to be a celebrity. (Laughs)

Better yet, I'll tell them I interviewed Michael Madsen. (Laughs)

Hang around with me and you'll get a private tour. (Laughs)

No problem there, we can throw back a few, go to Alcatraz, and perform a live two-man show of Birdman of Alcatraz.

Robert Stroud - Burt Lancaster sure burned that man into our memories, didn't he?

It's one of the best films ever made. Easily.

No one would make that film today. No one would have the balls to do Birdman of Alcatraz today. I don't even want to say who I think they'd get to play that part today.

You don't think you could pull it off?

Obviously, I believe I'd be able to do it. Would anyone allow me to do it is the question. Who would finance it?

You're right, you gotta love that term -- bankable.

Well, depending on who you talk to, I'm bankable. But, in this studio system as it currently is, I won't be playing Robert Stroud.

Mike, you're fantastic. You have and will play many memorable roles. Speaking of memorable performances, you're also starring in a really big film that starts shooting pretty soon. I know that is going to reunite with a certain legendary film director that we all know and love.

I'm doing a western and I'm back with Quentin [Tarantino]. We're doing a big cowboy picture called The Hateful Eight. I'm very excited about it. That's definitely not a comedy.

There aren't any good guys in the movie. It's called The Hateful Eight and all eight of them are pretty hateful. It's not a movie about nice people, put it that way. (Laughs)

It's not called the wonderful eight, the supercalifragilistic eight, or dinner with eight. (Laughs)

(Laughs) How about eight is not enough? How's that for a title? If you think about it, eight might not be enough.

This eight will be enough for anybody, believe me.

What can you tell us about your character in the film?

I'm a cowboy in a western film, I play a butcher. It takes place right after the civil war. Everyone thinks they know what it's going to be about, but they won't.

Wasn't there some controversy recently involving the script?

Yes, there script leaked on the internet. Quentin has re-written several of the acts including the end. No one is going to be able to figure it out. Everyone will be sequestered on the set, no one is going to know what happens until he cuts it together.

Whatever happened to that element of surprise?

People will be surprised believe me.

Alfred Hitchcock insisted that no one be allowed in late to any showing of Psycho in 1960. Theaters actually enforced this rule with armed Pinkerton guards. Hitchcock did this because he didn't want anyone to come in after the film's biggest star, Janet Leigh, was killed off in less than a third of the way through. Can you imagine what it would be like if Tarantino were able to do this?

It would be astounding, we'd have a reason to go to the movies again. We'd have more good movies.

That's exactly why I'm glad to be in Quentin's favor, he's about the only one left that's still going to shoot using film. He'll keep making things that are going to last forever. The pictures being made these days, in 20 years no one's going to be watching them. I guarantee you, in 20 years they'll still be watching Tarantino.

I'm a huge Tarantino fan, he is definitely a film purist. He's this generation's Hitchcock, no doubt about that. I'll never in my life forget Reservoir Dogs. I am bowing to you, sir -- truly outstanding film and your performance within it was outstanding.

Thank you for your kind words.

Not too long after you first worked with Tarantino in Reservoir Dogs, you were in another of my favorites Donnie Brasco -- another outstanding film in which you played Sonny Black, a real badass.

Yes, thank you. That was another great picture. I've been truly fortunate to have been able to do a few things that stick around in people's minds. I've been lucky that way. My career has seen some ups and downs, but I always bounce back like that.