The conventional wisdom among kids these days is that CSPAN -- the network that provides non-stop coverage of Congressional activities - is boring. Given a choice between American Idol and House Fiscal Year 2010 Budget Markup, Part 3, they'd rather watch some hipster singing "Mad World." What are they thinking?

You kids can have your Susan Boyle and Adam Lambert. For my money, this season's breakout reality star is Rep. Michele Bachmann (R-MN). Bachmann is already known for such cable and radio hits as Barack and Michelle Obama may have "anti-American" views; we need to be "armed and dangerous" against Obama's energy plan; and President Obama may send our kids to "re-education camps."

But it's Bachmann's frequent appearances on the floor of Congress that have turned CSPAN into The Surreal Life. Consider:

Yes, Laguna Beach and The Hills are scripted. And yes, producers regularly edit footage to make things appear more exciting. But that's the point: if your reality is boring, make stuff up.

Michele Bachmann knows the art of good fiction. $8 billion in the stimulus bill for unspecified high speed rail projects? High speed boring. But add Vegas, Mickey Mouse, and kids with gambling addictions and you get this:

BACHMANN: They look at this administration, and in the name of economic stimulus, they saw that this current liberal administration has legislation that is overflowing with wasteful government spending. And they might have heard about one of these wasteful projects. It is a brand new, billion-dollar high speed train that is going to go from Disneyland up to Las Vegas. A billion dollars of a widow's money to go to pay for a brand new ride essentially from Disneyland to Las Vegas. Harry Reid, the Senator from Nevada, was behind this measure, and it makes us wonder, is he more interested in making sure kids start gambling at younger ages?

Like any good Vegas story, it's not actually true: the bill doesn't actually contain any money for Disneyland, Las Vegas, or children at craps tables.

Need a better enemy? Instead of a president leaving in place the private health care system, how about a president intent on spending $4 trillion to force Americans into a socialist medical experiment:

BACHMANN: Because they are so addicted to these high levels of spending, President Obama, in his State of the Union address, said what he wants to do with that money. He wants socialized medicine.

BACHMANN: And in one vote, the Speaker of the House and the President are asking this body, the people's House, the United States House of Representatives to spend $4 trillion of their money for socialized medicine.

BACHMANN: And the President has already indicated that he may be using that money not to build new nuclear power plants, which would have zero emissions, but to redistribute the wealth, as he is wont to do, with paying for socialized medicine. So we are going to embrace a socialistic view of socialized medicine for the American people which will further be a burden on the American people.

BACHMANN: It was a slap in the face to the American people to spend that kind of money in stimulus, and now you are talking socialized medicine. This is nationalizing. This administration loves to nationalize every aspect of every American industry that there is. The health care industry, which could be 18 percent of our economy, in one fell swoop, could be nationalized.

But Obama has never said or proposed anything like that. Obama's own website (very boring) states: "On health care reform, the American people are too often offered two extremes -- government-run health care with higher taxes or letting the insurance companies operate without rules. President Obama and Vice President Biden believe both of these extremes are wrong."

From Survivor to Real World, reality shows have frequently explored the issue of race relations in America. Not to be outdone, Michele Bachmann offered her own commentary:

Cliffhangers are essential to keep viewers coming back for more. (Am I pregnant? Tune in next blog post). Bachmann knows the art of a good cliffhanger:

Will Obama enslave our kids?

Will Obama turn us into an Eastern soviet bloc nation?

BACHMANN (Professor of East European History): Mr. Speaker, the President's remarks today are nothing more than industrial policy that you would see in Eastern bloc nations. I urge every American to download the President's comments that he made today. This is the future that we are looking at in the United States. It is not good enough to have the Federal Government just take over banks, to just take over insurance companies, to just take over secondary mortgage markets, to just bankrupt our country, and to punish with new energy tax increases.

Will Obama turn our currency into Zimbabwe's virtually worthless dollar?

BACHMANN (Former Zimbabwe Finance Minister): This is absolutely unsustainable. Pretty soon we will have currency equal to Zimbabwe's if we continue down this road because of currency devaluation. This is what we're seeing. We're looking at essentially a doubling of the debt under what the Obama administration wants to put together.

Will Obama dictate how many pogo sticks we can buy?

Reality show watchers love kids: Jon & Kate Plus 8, 18 Kids and Counting. Bachmann loves kids too. Not only is Bachmann concerned about Harry Reid making it easier for kids to gamble away their allowance money at the Nicktoons Casino and Resort, she's also worried about our 5-year olds staying in bed because of oppressive tax rates. Instructing politicians to live their lives with "compassion," Bachmann proclaimed that the Democratic budget "debt levels ... will be so high that we are literally on this floor forging shackles and chains for today's 5-year-olds." Literally! (To be fair, while Bachmann was speaking, Nancy Pelosi was next to Bachmann welding cast iron).

Bachmann continued: "5-year-olds who, when they come into their peak earning years, would be paying tax rates of 65 percent; who, if they are a business owner, will be paying 85 percent ... Who, Madam Speaker, would be getting out of bed in the morning to go and put their capital at risk and their lives at risk working 14 hours a day to pay this government 85 percent of their income?" 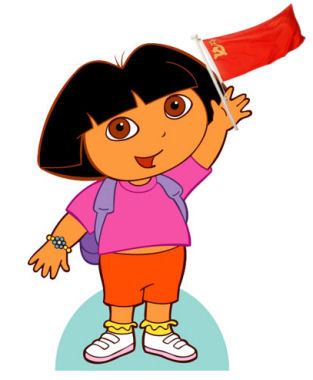 Michele Bachmann - a lover of capitalism - knows the secret to a financially successful reality show is a love of corporate sponsors. While Coke is the favorite drink of American Idol, Michele has only one love:

BACHMANN: We are seeing these numbers go through the roof of the Capitol right now, like nothing we have ever seen. It is like a sugar high. It is as though the people who are putting together this budget in the Obama administration were all staying up late one night drinking 24-packs of 20-ounce Mountain Dews. They are on a sugar high right now. They can't spend enough of your money.

According to a study by Made-up Statistics Quarterly - edited by Bill O'Reilly - there are 61,359 reality shows on television, but none feature a crazy congresswoman from Minnesota.

Bachmann needs to live out her true potential: out of stuffy Congress, and into the reality show universe. It's a universe where Bachmann can reject Andy Baldwin's rose because he wants socialized medicine, and live in a house with seven strangers who stop being polite and start getting real by accusing each other of promulgating involuntary servitude.

Hollywood, are you listening?

Eric Hananoki is a senior researcher for Media Matters for America and a former researcher and segment producer for The Al Franken Show. The views expressed here are his own.