They say a picture's worth a thousand words. If that's true, the following 10 images could provide the lyrics for a thousand blues songs. The graphs are taken from series of recent reports which, when considered together, create a paint-by-numbers picture of the lifelong losing game faced by working Americans.

The chorus to our blues song goes like this: The middle class and working poor are increasingly trapped in a cycle of economic decline, a downward slope which stretches from their golden youth to their sunset years. And there's no way out, unless we find one for ourselves.

It begins with the ever-growing mountain of debt which students must acquire in this society in order to receive a college education. Since 2007, the last year before the financial crisis which Wall Street created, total student debt has more than doubled: 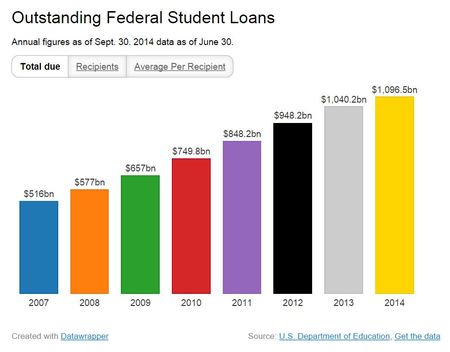 Total student debt in this country now exceeds the total credit card debt held by all Americans. The amount of debt held by each individual borrower has also soared, rising by more than 50 percent: 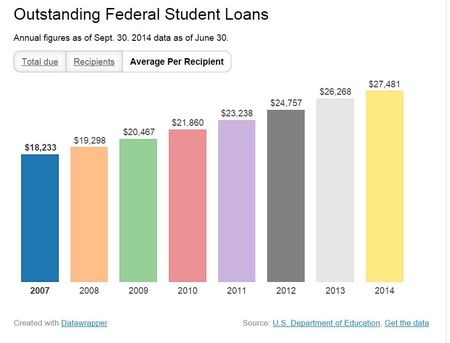 The average amount now owed per student is now more than $27,000. And because job prospects are poorer for young people than they've been in recent memory, many are having difficulty paying back these loans: 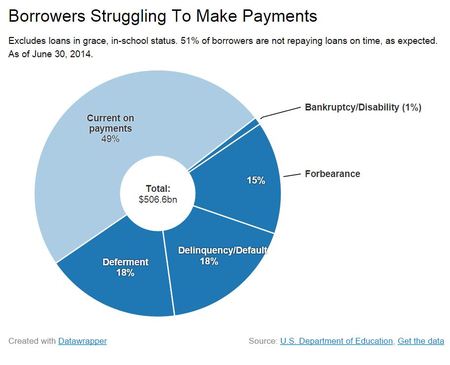 Source for above: U.S. Department of Education via Shahien Nasipour, Huffington Post

Having been burdened with debt even before their working lives begin, young people then enter a workforce in which real income is falling for all but the wealthiest among us. This change is especially striking when it is expressed as hourly income: 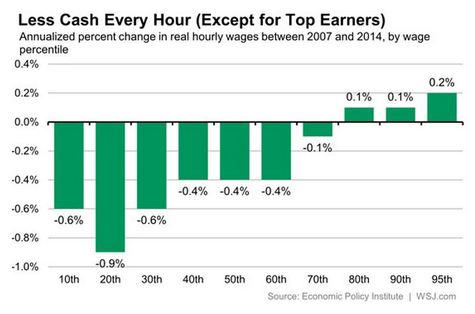 It should be noted that this accelerating difference in income between the wealthy and the rest of us has taken place since the financial crisis, and since both a Republican and Democratic administration went to such great lengths to rescue the banking industry. It should also be noted that this gulf of inequality has been widening for some time: 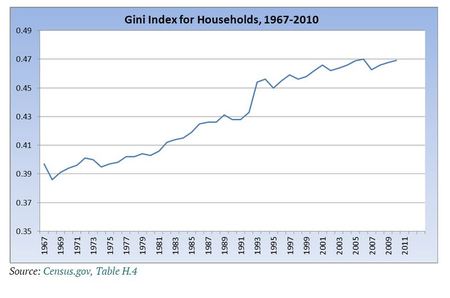 Even modest proposals to ease inequality, such as an increase in the minimum wage and a low-impact job creation program, have been rejected by intransigent Republicans in Washington's fractious climate.

The net result of this wealth transfer from working people to the already-rich has been, for most Americans, an increasing inability to maintain their standard of living. As a result, more and more Americans at the lower end of the income spectrum have been forced to borrow an ever-increasing rates.

We're seeing a shift of indebtedness down the income chain, as the working poor and the lower-middle-class slip into a cycle of debt. Lower-income families are now more deeply in debt, in fact, than any other income level: 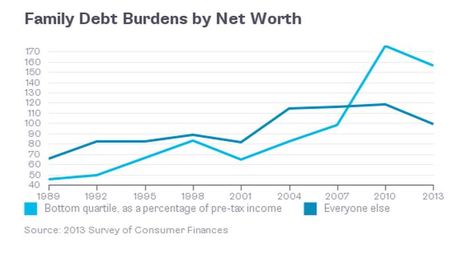 Lawsuits from payday lenders and other fiscal predators are given undue deference in the court system. That, as ProPublica reports, can leave low-income working Americans saddled with a lifetime of debt for a single ill-advised loan.

As a result of these and other factors, the poorest families in this country have never been more deeply in debt than they are today: 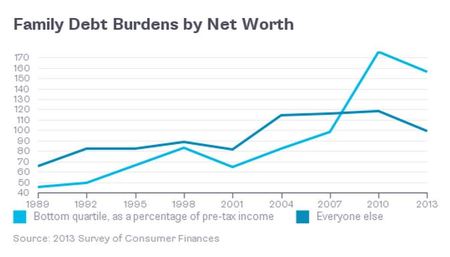 Inequality soars. Congress enacts a draconian bankruptcy bill. (Student loans are subject to their own, especially harsh provisions.) Bankers defraud homeowners. People can't make ends meet. They take on more debt than they can handle. For these and other reasons, the garnishment of American workers' wages is quite high:

For many Americans, the so-called sunset years offer no relief from the cycle of indebtedness. In what can only be just described as a grimly ironic form of closure, we now know that a number of senior citizens are even forced to struggle with a burden once thought to be the province of the young: student debt.

The total student debt held by Americans over sixty-five has risen from less than four billion dollars in 2005 to more than $18 billion today. 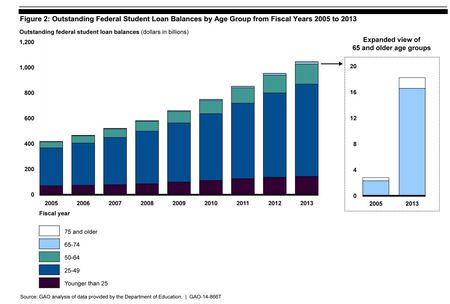 This debt has led to a shredding of the social safety net for seniors, survivors and the disabled on Social Security. The General Accounting Office reports that student debt is carried by roughly 3 percent of households headed by people 65, and that approximately three-quarters of that debt belongs to the seniors themselves (rather than indebtedness on behalf of younger family members). Senior student debt is much more likely to be in default.

The Department of Education has been withholding Social Security benefits for seniors, as well as survivors and disabled Americans, using what is known as an "administrative offset" to pay off student loans. The GAO reports that the number of individuals whose Social Security benefits were "offset" in this manner "increased about five-fold, from about 31,000 to 155,000," and that "among those 65 and older, the number of individuals whose benefits were offset grew from about 6,000 to about 36,000 over the same period, roughly a 500 percent increase."

Disturbingly, the GAO reports that "the value of the amount protected and retained by the borrower has fallen below the poverty threshold." As a result, the GAO concludes that these clawbacks for defaulting student loan borrowers are leaving an increasing number of seniors and other Social Security beneficiaries impoverished.

The Way We Were

These indebted seniors can remember a time when the middle class was healthy and vibrant in this country - a time when, not coincidentally, far more American workers belong to unions than they do today: 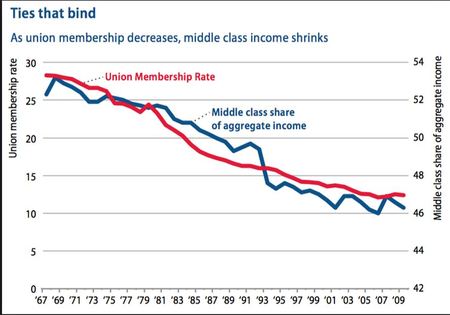 The decline in union strength has left working people less able to negotiate with the increasingly profitable corporate class, and has therefore rendered them less capable of guiding their own destiny.

The result? Millions of Americans have been robbed of their freedom and autonomy by an economic system which, whether by accident or design, robs them of the belief that they can act independently to seize their own futures. That system is an elegant machine, one in which indebtedness preserves the illusion of social mobility for young people and of an affordable lifestyle for many working adults. Those illusions relieve the social pressure for change - and generate massive profits at the same time.

This systematic process ultimately leaves millions of people enchained by debt, fearful of losing their jobs, challenging their banks' usurious terms, or surrendering the American Dream which seems to forever remain just out of their reach. They become afraid to take to the streets and demand change because the consequences might bring an end to that hope which remains their most valued possession.

THis cycle needs to end. These images tell us that it leads to a form of fiscal servitude which dogs us, in the words of the old song, from the cradle to the grave.

We said at the start that these pictures could provide the lyrics to a thousand blues songs. But, as Cornel West has said, "a bluesman is a prisoner of hope." That hope rests in the possibilities of awakening which surround us. One of those possibilities is embedded in that final image, which captures the relationship between an organized workforce and economic equity.

That image reminds us: If we re-organize American workers and engage in other forms of citizen mobilization we can reverse this downward cycle. That's a long road to travel, and nobody wants to walk it alone. That's where solidarity comes in, teaching us that what we cannot do as individuals we must achieve by working together.