Move over Dr. Atkins, there's a new diet guru on the scene. You may recall that a few years ago he called you "fat," and suggested your death was more a result of your eating habits than a bad fall. But while this new guru's approach affects millions, he appears to have a target demographic of one.

For years now, New York City Mayor Michael Bloomberg has been on a crusade to reform the way his city eats. During his reign New York has banned trans fats, forced chain restaurants to post calorie counts, pushed eateries to cut their salt usage, and encouraged people to skip sugary drinks in favor of water.

You may find these methods heavy-handed, but then again, this diet was never about you.

The New York Times reports that even as the mayor implements one city-wide dietary restriction after another, he continues to indulge. He loves burnt bacon and peanut butter sandwiches, hot dogs, fried chicken, and Cheez-its. He puts so much salt on his bagels "that it's like a pretzel," and so much salt on popcorn "that it burns others' lips." 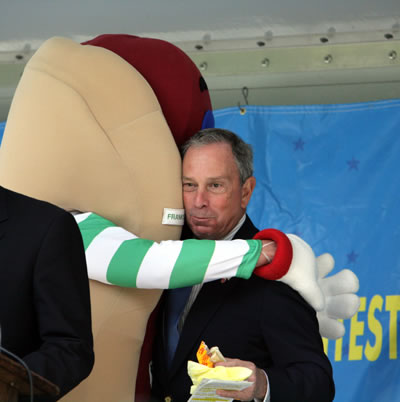 So what gives? Is this just a typical case of a politician's hypocrisy? Not really. Read further into the piece, and you'll find something more sinister at play:

"[Bloomberg] struggles mightily to restrain his appetite. As a billionaire in one of the dining capitals of the world, he can eat anything he wants. But he is obsessed with his weight -- so much so that the sight of an unflattering photo of himself can trigger weeks of intense dieting and crankiness, according to friends and aides."

So there you have it. The mayor is essentially turning his own self-loathing on the rest of the city. He's asking us to pay for his gustatory transgressions. Bill Clinton felt our pain. Bloomberg wants us to feel his.

Most elected officials strive to epitomize their constituents. New England politicians play up their stoic independence, southerners their religious zeal, midwesterners their early years on the farm, and so on. It's a wise strategy. People like to see themselves in their leaders.

But Bloomberg has it backwards. He sees himself in the people. And we make his ass look HUGE.

So like some kind of nebbish-y Nero he decrees, "All this pastrami is going straight to my thighs...Ban pastrami!" It's diet by fiat.

Bloomberg isn't the first public figure to appear to let self-loathing fuel his agenda. (See social conservatives like Larry Craig, Ted Haggard, and Mark Foley, to name a few.) It's just that the cause he uses as an outlet seems so much more quotidian.

Can you imagine what would happen if other politicians took a similar approach to dealing with their personal failings? Mark Sanford would block travel to Argentina. Bill Clinton would outlaw interns. And George H. W. Bush would ban reproduction.

Clearly that's no way to govern, but that doesn't mean Bloomberg's approach won't yield the desired results. It's too early to tell exactly what impact these initiatives will have on residents' health over the long haul, although other cities are following suit. But I really hope it works. Personally Mr. Mayor, I think you look great already. Skinnier than ever. Now can I please have a corn dog?