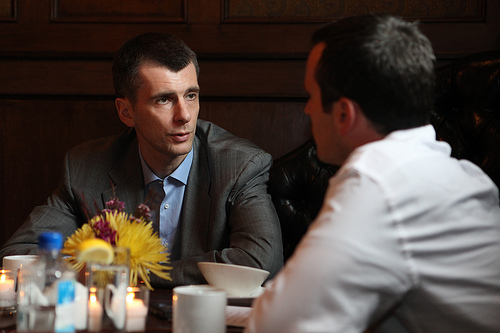 A few weeks ago I got an email.

Did a Nigerian prince want to brainwash me and steal my life savings? Nope. Far from it, it turned out.

What was up was that Mikhail Prokhorov, the 6'8" Russian billionaire, and first foreign owner of an NBA basketball team, wanted a "Brooklyn blogger" to interview him. Somehow his people picked me--plumb out of the blogosphere.

The idea was that I'd do a sit down interview with Prokhorov at my café or bar of choice. He wanted to "have a beer with me," I was told. Upon hearing this I immediately thought of Daniel Boorstin, who in his book The Image wrote about "pseudo-events" and synthetic news creation. Anyways, I was writing the piece for the Brooklyn Ink, an Internet news site I write for based out of Columbia University's School of Journalism. I felt a bit weird about the whole thing. But feeling weird is for suckers. Just like Nike says, "Just Do It!"

So I needed to pick a bar. He wanted to be able to eat. Or I was told he wanted to eat. Alright then. How about gnarly old Gowanus? That's where I live in a crooked row house with my two roommates, Matt and Rory. I chose Bar Tano, a polished Italian place nearby tire shops and ragged bodegas at 9th street and 3rd Avenue. They bit.

One week later I met there with his PR people. Three women. One was from Burson-Marsteller. Another was from a subsidiary, Proof Digital Media. The third was Prokhorov's personal aide de camp. We spent some time chatting. They asked me what I liked about Brooklyn--where they had never been. It was fun. They were nice. We ate paninis and drank iced tea and complained when the coffee came late. They explained to me they that had seen my stuff on HuffPost, and then followed my Internet trail. But the whole thing still felt like a shot out of the blue.

It was a go by the time we had settled the check (I paid my share). I was to meet Prokhorov on the 19th of May.

So a "blogger." Interesting, right? I'm not even sure I am a blogger. Maybe there was some sort of Frost-Nixon thing going on: that they thought I'd feel grateful and throw softballs. Or maybe they earnestly wanted to introduce Prokhorov to Brooklyn in a down-to-earth way. I figured it was probably a little of both. And, of course, it wouldn't hurt to have the Big Boys boxed in by what's already written, if and when he chooses to talk to them.

Fast-forward two more weeks. Another venue change. Bar Tano's photo policy made it difficult to take pictures inside, so the agents suggested that we move to the Clover Club in brownstone-strewn Carroll Gardens. Not exactly gritty, not exactly modest--but whatever.

I'll admit, I was a bit nervous before the meeting. I didn't know what to expect. I'd watched Prokhorov's interview on 60 Minutes. I'd read the slew of comic one-liners he unleashed on reporters the previous day, as well as the many depictions of him as some sort of cold, humorless, sphinx-like mystery man. Throw this into the mix: people had taken to comparing him to Dolph Lundgren's portrayal of a Soviet murder-machine in Rocky IV, who after beating Apollo Creed to within an inch of his life says, "If he dies, he dies." (He died). The mainstream media coverage was schizophrenic. He's both unsmiling and a comic, and a B-rate actor? It didn't make sense.

What I knew for sure was that in Brooklyn he had helped stir serious controversy. I saw it for myself covering the groundbreaking of the Atlantic Yards Project a few months earlier for the Ink. Locals gathering outside Freddy's Bar, which was forced to move as a result of project, were royally pissed. They wore oversized poster masks of the "main culprits" of Atlantic Yards. Prokhorov was one of them. Conversely, some folks from Crown Heights had Brownsville seemed practically giddy at the prospect of employment. The two factions engaged in some light verbal sparring. "Who's true Brooklyn?" Et cetera, et cetera.

Back to Clover Club. Me and my (other) friend Matt, who'd agreed to take photos for the article, waited in the backroom with two of the PR agents for 40 minutes before Prokhorov showed up. He didn't come alone. A full camera crew was with him. Boom mics and all.

Prokhorov is tall, he's lanky, and he sort of glides when he walks. We met in the middle of the room. He's got a firm handshake, but it lets up just a little before you can throw in a good jostle. Leaves you wondering.

We sat down. I had this whole plan set up to order a Brooklyn beer--a Six Point, on tap at the Clover Club--and see if Prokhorov takes the hint. It thought it would be telling if I opted for a local brew while Prokhorov chose some sort of mixological creation with muddled mint and flaming orange rinds.

Once the invasive cameras left we rifled through the bar's lengthy drink menu.

"Go for a Brooklyn Lager," my photographer friend, Matt, said.

Prokhorov was still busy looking through the menu. He seemed, almost, panicked.

"No," he said, "Maybe a glass of red wine sometimes, with dinner."

Well so much for that plan. I figured I might as well get right into it then. But before I do here, I want to let all you readers know that after reading this article you should read the Q & A I wrote for Brooklyn Ink. The link is included below.

Anyways. We chose to drink tea instead. Prokhorov politely asked the waitress for English Breakfast tea, which she had to fish out of the basement. I followed suit. I kicked off the interview by asking Prokhorov about his family life: his mother and father, his sister, his apartment growing up. We then moved on to Brooklyn: what he knows about it, what he intends for it.

As it turns out, he knows quite a bit about Brooklyn. He'd visited Brighton Beach about 15 years ago. He knew that, of all people, Neil Diamond was from Brooklyn (although he mistakenly ID'd Robert De Niro as hailing from the borough.) He mentioned Al Capone, pronouncing the mafioso's last name the way an Italian might, accenting the normally silent "e". He wouldn't commit to moving to Brooklyn yet, rather sensibly, as he, "(needs) time. When you know the situation better, you have a professional opinion." One of the big takeaways I had from the interview was that Prokhorov--famed for his love of "controlled risk" and his partying--really isn't that risky. He's certainly not reckless. He is smart, and calm.

One of his most reveling quotes: "When you have too much passion you can hurt people's feeling. You need to move slow."

Prokhorov says he views the borough as the link between local culture and global culture.

"They [immigrants] came to Brooklyn from different countries many, many years ago," he told me. "Now the world is changing. But they saw this. They moved from the other countries. And now we have a global world. There are no borders."

David Stern, in his never-ending desire to expand the NBA globally, probably felt a sudden pang of joy shoot through his body. I asked Prokhorov if it was Stern who introduced him to Bruce Ratner.

"No," Prokhorov said. As it turned out, his first desire was to own the Knicks, but they weren't for sale. So he asked an investment banker friend of his (who he said he couldn't name) to keep an eye out for him. About a year later, his friend called him back: "'Look,'" he said, "'there's another opportunity. The New Jersey Nets, they are ready to sell. And in two or three years they will move to Brooklyn.' This guy, he organized the meeting, and Bruce came to Moscow."

I moved on to Atlantic Yards. How aware of he was the idea, as some had put it, that the project would destroy the soul of Brooklyn? Did he care? What about Zimbabwe? You can read it all in the Ink piece. But his basic message was that change is tough, and that change is reality--that at this point it's better to look forward to potential opportunities. It goes without saying that the people who were pushed out of their homes for the project's sake wouldn't take to this so well. But as Prokhorov said, "I'm a minority shareholder in the arena." Well, only by 5 percent--he has a 45 percent interest in the team--but I wasn't going to belabor the point. And Prokhorov seemed to get it. Even so, I think that he could have remarked on the matter a bit more. After all, it was Prokhorov who helped push Atlantic Yards through in the end. And even though Ratner conceived of the project--and ultimately brought it about--it was Prokhorov who bailed him out.

"You said you were the only NBA owner who can dunk. But what about Michael Jordan?"

"When I said this he was very far from being an owner."

"You don't think you could dunk on Michael Jordan?"

"I think that he is better."

"Because I'm also a blogger. But I write everything longhand and my secretary posts it."

Interesting answer, I thought. But isn't it the bloggers who pedal in gossip and rumor?

"It depends on the question: What is a blog?" Prokhorov said. "It's new communication. And it's a great matter of trust. If you have the respect of the people, it doesn't matter. You write your own ideas. Somebody can say its good, somebody can say it's not."

A few minutes before, Prokhorov's personal agent had come in the room. "Five minutes," she gestured with her palm and fingers outstretched. We wrapped it up.

"Did you get what you want?" his agent asked me.

Prokhorov looked at me. I stuck out my hand. A firmer shake this time. We smiled. He got up.

"Next time I come we're going to get a pizza together," he told his assistant.

Prokhorov walked out of the bar. He made his way to catch a late night plane back to Russia. I left with questions. Can Mikhail Prokhorov win Brooklyn over? Can he sell the idea of the team, along with the tickets? I'm not entirely sure. It's a tall order. Even with his humor, his wit and his intelligence, he still needs to prove to the borough that there's something it for the culture and the people, and not just the economy. Ultimately, it will take more than a winner. Even the fabled Dodgers had occasional trouble selling out Ebbet's Field.

We'll just have to wait and see, it seems. But I am looking forward to that pizza.