Or How Jon Snow Shot Himself in the Foot

The "Battle of The Bastards" on this Sunday's episode of Game of Thrones featured the series' first direct medieval-style warfare and ended up delivering one of the best damn battle scenes ever. We shouldn't be surprised given that:

1. The episode is one of the now-notorious penultimate episodes we usually get in a Game of Thrones season.

2. The episode is directed by Miguel Sapochnik who previously directed season five's "Hardhome" which featured an anxiety-ridden encounter with the White Walker army (if we can call it that)

3. The battle on the fields outside of Winterfell was, like much of the series, at least partly inspired by real events in history.

While giving their insider take on the episode, show creators David Benioff and D.B. Weiss cited the Battle of Cannae in 216 BCE, a battle between the Romans and Hannibal of Carthage (not to be confused with this guy), as a model for the the tactical killing blow on Jon Snow's forces. 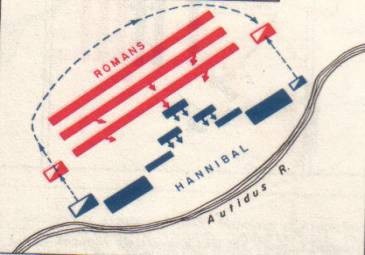 Based on numbers, the battle should have been won by the Romans. Figures are debated, but it is accepted that Hannibal's forces were outnumbered. Yet Rome's loss was so massive that leaders and strategists did the Roman equivalent of tearing up the playbook and firing both the offensive and defensive coordinators.

The gist of Hannibal's much lauded plan was to draw the bulk of the Roman forces in by allowing them to push forward, only to then flank them with his own calvary and infantry placed at the wings -- all while the infantry, absorbing the initial attack, began to form a crescent around the Romans. This established an enclosure that put a chokehold on the Roman forces caught inside since their backline was forced forward and the front lines collided head-on with infantry. The aftermath was one of the bloodiest battles and biggest defeats in military history, with figures being estimated at 50,000+ deaths. 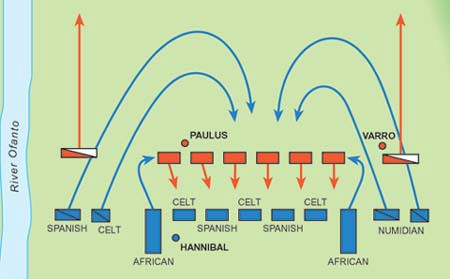 But just how much does this matter for Game of Thrones?

Sure, it's cool that they used that formation. It's great that I was inspired to read about a battle I had never read about until last night because I was still on the high of watching this episode twice. Disclaimer: Me not knowing about the Battle of Cannae until now exposes just how little I actually know about military history and strategy -- but, the details of this historic battle really drive home just how much Jon screwed up when he did that one thing Sansa told him not to do.

By charging forward, albeit for an understandable reason (Rickon), Jon effectively reverses the situation of the Battle of Cannae. It's reversed given that in Cannae, the enclosure tactic was used to beat the larger Roman army. Plus, it was the Carthaginian army that seemed the more make-shift of the two given the variation of regions the warriors came from.

Jon was drawn into Ramsey's trap, forcing Jon's own make-shift forces to rush in and support him. Now exposed, they ended up surrounded by Ramsey's heavier infantry after having already crashed into his calvary. In other words: By charging in (and giving the cinematography crew a chance for some great shots), Jon gave the massive tactical advantage meant to be used by the lesser side to the stronger and more organized force.

Our detour through the Battle of Cannae, besides pointing out the immediate similarities between the two, is meant to reinforce just how right we all were if at some point in last night's episode we stopped for a moment and thought to ourselves, "Jon seriously fucked up."