The name Dr. Martin Luther King Jr. is synonymous with the Civil Rights Movement, and his legacy is symbolic of the birth of a new America, free from the chains of segregation and legalized oppression. As we mark the 50th anniversary of the March on Washington, we acknowledge his life and the power of one's voice to initiate social change and enhance public policy.

Throughout the nation, many commemorated the anniversary of this historic march and the influential policy changes that emerged as a result of the persistence of many iconic civil rights trailblazers. Though institutionalized racism continues to persist in the modern day, the life and legacy of this great man is remembered through his iconic I Have a Dream speech given during the March on Washington.

The University of Maryland celebrated the 50th anniversary of the March on Washington through the Civil War to Civil Rights: The Well-Being of a Nation Symposium, hosted by the Clarice Smith Center, in partnership with the UMD School of Public Policy and the UMD School of Public Health. This event featured scholarly presentations and stimulating artistic experiences that examined issues of the Civil War through the lens of our nation's civil rights struggles, with the Civil War as the genesis of the Civil Rights Movement in this country. 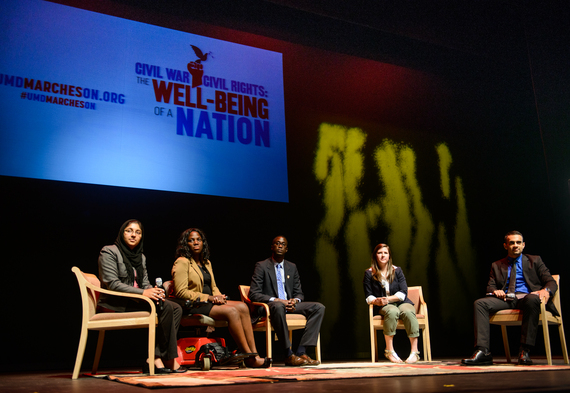 The conference beautifully placed the March on Washington for Jobs and Freedom in its historic context, both as the culmination of the struggle since the Emancipation Proclamation, and as the stage-setting for a new generation of civil rights issues that reveal the important -- but often hidden -- inequalities of our time. The larger social message of the civil rights symposium remained to address the misconception that racial inequality ended with Dr. King and the Civil Rights Movement.

The speakers at this university's civil rights symposium echoed the message that Dr. King's struggle did not end with a speech or his untimely death. Nonetheless, the obligation to propel his message of social equity into the modern day rests on the shoulders of this generation. Dr. King's close friend and social activist, Professor Julian Bond, informed the attendees that the Civil Rights Movement did not cease to exist after the March on Washington -- that it had only just begun. Bond asserts:

I had hoped to let [attendees] know that the Civil Rights Movement was composed both of extraordinary figures, like Dr. King, but also ordinary persons like themselves, who rose to extraordinary heights. What was done then they could do now.

The significance of these words were felt by students who sought empowerment from these profound speakers, including civil rights leader Harry Belafonte, MSNBC's Toure, Kojo Nnamdi, Judith Browne Dianis and Peter Edelman.

Moreover, the central theme of the event was examining the power of the young voice to influence change. This generation is revitalizing the demand for improved civil rights through student activism. The symposium featured a slew of student panelists discussing how the legacy of Dr. King paved the way for their leadership. University of Maryland student Raaheela Ahmed states:

We must all recognize that the movement for equality and justice has not ended. The voice for demanding justice and equality lives within all of us. It is truly up to activate that voice or remain soundless.