I have seen countless times women expressing that they do not "need" feminism because they are not "man-haters" or not a "lesbian". It is so saddening for multiple reasons; men and women are so ill informed that they believe this is what feminism means, they might have been around people that claim to be feminists and are actually using this movement to promote their misandry, and the main complaint: feminists are just man-haters. 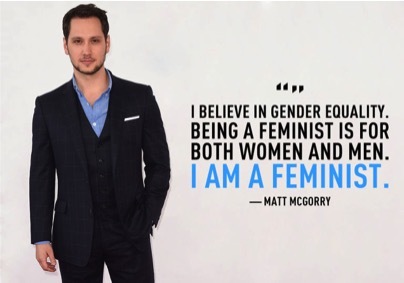 Matt McGorry, one of the most prominent male celebrities involved in the support of equal opportunity, posts frequently to his half a million followers on twitter about this passion: why feminism matters. Matt McGorry has been an inspiration to many of his fans, showing and
educating others on the true meaning of feminism.

"I'm a white heterosexual male, and I have a lot of privilege in that way," he says. "When people make ignorant comments, I get angry, but I haven't personally been the subject of this sort of discrimination. So I think there's a certain level-headedness to it that I can bring, I hope. Even in my daily life, I get to have a conversation more simply because I'm putting it on social media, and my friends are asking me about it."

"I'm not going to be convincing the people who really don't believe in gender equality on my Twitter feed, but I think people who maybe missed out on some understanding of it, but who are good people deep down -- those are the people who are worth reaching. I do think there is some risk of isolating people, but -- f**k those people, honestly." 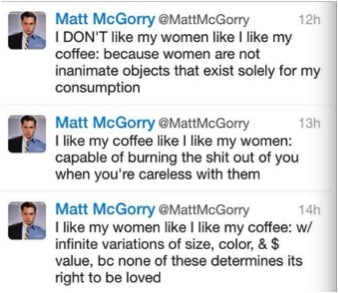 
In September 2014, the HeForShe campaign was launched. HeForShe is a campaign that invites people all over the world to join together and fight against gender inequality and promote women's rights. 1.3 billion people visited HeForShe.org and signed up to stand together to help create a gender equal world. HeForShe is promoted by UN Women and created by Emma Watson, arguably the most prominent woman in support of this movement. 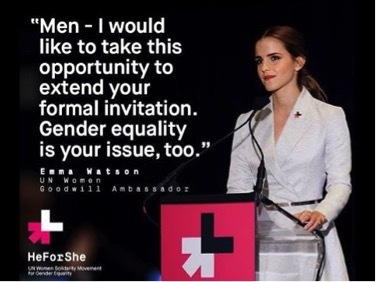 
Emma Watson, known as an actress in the Harry Potter series has become a UN Women Global Goodwill Ambassador. During the Ambassadorship Watson has visited Bangladesh, Zambia, and Uruguay to speak and promote necessary education for women as well as frequent posts to her twitter page, which has a following of more than 21.7 million followers.

Also, see my post in DiplomatArtist.com: "Feminism in the UN"