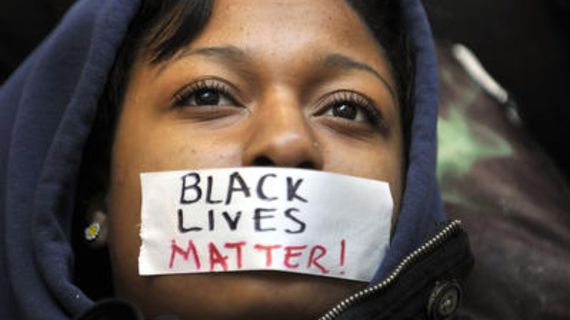 "I am trying to understand the Black Lives Matter movement and the rationale behind the protests. They protest a white police officer that shoots a black man. But they don't protest any of the numerous black on black shootings. A black police officer gets assaulted or shot and there are no protests. I don't understand the difference in these deaths if 'all black lives matter.'"

Those were the words written to me, at random, by an old college teammate hoping to gain a deeper perspective on the topic. I hadn't heard from Stewart in over 10 years; yet I'm hard pressed to envision a more apropos social environment to end our decade of silence.

Now a police officer in Waterloo Iowa, Stewart represents a large faction of pseudo-oblivious Americans who "can't understand" what all the uproar is about: white, middle-class, suburbanites whose feelings are deeply persuaded by their white privilege that insulates them from a reality that ensnares all of Black America. I'm more than happy to oblige his inquiry...

BLM is not a typical movement with leaders, headquarters or an appointed spokesperson. It is as much a digital movement as it is a physical one. This dynamic can be extremely effective, as the internet and social media helps push information across multiple platforms at a much faster speed. However, the downside is that you are rendered powerless against the buffoonery that comes with free speech. Anyone who identifies with the movement can hashtag BlackLivesMatter and spew content that is counterproductive to the cause--leaving people on the outside perplexed as to the purpose.

A recent example of this complexity came from Minnesota where protesters took to the streets. I sat cringing on the couch while the shouts of "Pigs in a blanket it! Fry 'em like bacon!" rang out. A large part of me wanted to scream "IMPOSTERS!" But who am I that I may denounce a group's authenticity? I'm not at liberty to speak to their struggle. I am no more entitled to the Black Lives Matter Movement than any other person who feels connected to its intrinsic value.

Apathy, or lack of interest, also plays a large role in the general public's dismissive attitude towards the movement. Frankly, some people just don't care. The issues don't affect them other than monopolizing their nightly news, which makes them less sympathetic and increasingly indignant by all the Black Lives Matter rhetoric.

The issues are so much deeper than just the institution of law enforcement. It's deeply embedded in our criminal laws and law making, which precipitate bias in our judicial system. So when people attempt to conflate the issues by saying all lives matter, it acts as a passive-aggressive euphemism to say "screw black lives," or when people like former New York mayor Rudolph Giuliani attempts to insult your intelligence by presenting you with false equivalents comparing Gala apples to Navel oranges. As a fail safe defense mechanism, they insist on equating black-on-black crime to a crime perpetrated by a white cop against a black citizen. Many fall for the bait-and-switch tactic to shift the narrative from institutionalized racism and police brutality to black-on-black crime. But the two will never be equal. Therefore the response and outrage will never be the same.

A white officer in uniform was recently shot and killed in Houston at a gas station by a black man. There has been round-the-clock coverage on the story on CNN and other media outlets--rightfully so perhaps. However, if the officer was simply a regular white guy, would there be as much emphasis place on the murder? No! It would be just another 30 sec blurb between sports and weather.

If it's a major deal when a black man kills a white officer in cold blood, due to the reverence and esteem beholden to law enforcement, why is the black community encouraged to be apathetic when a white officer, bound by a higher standard, kills a black man (or kid) in cold blood? Why are we urged to limit our focus to internal issues, as if we can't walk and chew gum at the same time?

"Black people need to focus on their community and all the black-on-black crime" I agree with the argument; however, I disagree with the premise. The two are not mutually exclusive. It's not one or the other. Both issues need to be addressed simultaneously. We can focus all our energy internally, but outside there will still be a nation that was built on white supremacy.There will still be forces in place retarding the growth, disparities in the corporate world limiting our scope. And age-old issues within our criminal justice system that acts as a gravitational pull on the black community.

The same issues that have the majority irritated by all the exposure have me irate by the lack of outrage. Unless you've interacted with the police as a black man or woman, it's difficult for you to have an appreciation for the struggle. I don't shy away from my personal bias or pretend it doesn't exist. We all see the world from our own lens. That lens is shaped by our environment, upbringing and past experiences. As such, being white living in a white dominated society, affords you a specific viewpoint. Similarly, as a black man living as a minority in America, I have a unique viewpoint. Even when we think we are being objective in our analysis of situations like Ferguson, Baltimore, Cleveland or Stanton we fall short.

Some view the killing of twelve year old Tamir Rice in a playground as justifiable homicide. I view it as murder! This dichotomy is why America has a deeper issue with race relations than most want to acknowledge. So long as America has a race issue, so long as there is inherent fear of black men in America, race can never be ruled out completely as a probable cause in these white-on-black police shootings. I yearn for the day we can retire the Black Lives Matter hashtag, but we've yet to arrive at that place in time. Therefore, I will respectfully decline the request to hold hands and sing Kumbaya in the form of an All Lives Matter sign. I will align my moral compass towards social justice and set sail to remind the world that Black Lives Matter...until they do.

Torri Stuckey is the author of Impoverished State of Mind: Thinking Outside da Block