In the past few years, I became hooked on an ABC Family channel show Switched at Birth. I typically find its portrayal of teenage angst as refreshingly honest and greatly admire their integration of deaf youth into the storyline and their use of accurate American Sign Language. Unfortunately, as a bullying prevention researcher and advocate, the "cyberbullying" and LGBT storyline featured in the first two episodes of this summer season has me shaking my head in disbelief.

For those unfamiliar with this Switched at Birth storyline (and here's your spoiler warning), the show set up a "catfish" scenario in which Emmett, ex-boyfriend of protagonist Bay, starts texting with who he thinks is a girl several states away. They grow close via text messages and agree to meet. In reality, the girl is really a boy named Matthew who Emmett had previously reported for vandalizing students' cars. At the planned meeting, Matthew beats Emmett up, leaving him bruised and cut. Emmett's mother notices these marks and asks Emmett for the whole story. Emmett's mother, who happens to be the guidance counselor at the school, reports the "cyberbullying" to the school principal. The principal brings both Emmett and Matthew into her office only after Matthew reminds Emmett he still has a "sext" that Emmett once sent. Emmett denies the story and is determined to get his photo back so he can be honest about what has happened. With help from Bay, Emmett steals Matthew's computer to erase the picture and discovers that in fact Matthew is gay and has a crush on Emmett. This discovery leads Bay to suggest to Emmett to not report the "bullying" as it would out Matthew. Meanwhile, after leaving the principal's office, Emmett's mother confronts Matthew, slamming him against the lockers. She is suspended from her job for a few days. 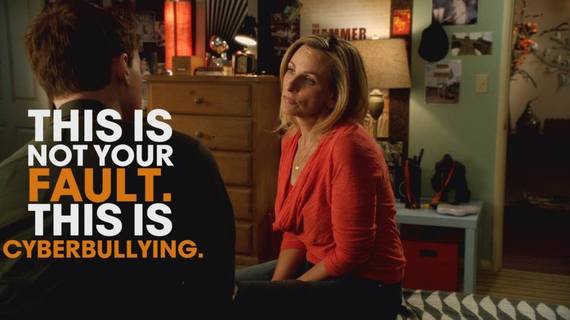 I will now break this down piece by piece.

Positive: Emmett's mother noticed warning signs and talked to Emmett about what happened.

I applaud the portrayal of a concerned mother noticing something wrong with her son and having an open enough relationship to find out what has happened. This is something that takes time to build and fans of the show will appreciate the effort Emmett's mom has put into building that relationship so that when this incident happened, Emmett was willing to talk to her.

Misguided: Emmett's mother took things into her own hands.

Unfortunately, parents confronting their children's "bullies" is becoming a common occurrence. This almost never results in a positive outcome. Although Emmett's mother was suspended from her job for a few days, this seems mild considering she is an educator who essentially assaulted a student. To me, this could be seen as even suggesting to parents that confronting the "bully" is the right approach, when truly, it will most likely result in more harm than good.

Misguided: The principal asked Emmett to confirm the story in front of Matthew and then dismissed the investigation once Emmett denied what had happened.

By definition, bullying involves a power imbalance. In this case, this was definitely true -- not only had Matthew already successfully beat Emmett up, he had private texts to hold over Emmett. Of course Emmett was not going to admit the story in front of him -- Matthew's power over him was too strong. This is why accused bullies and targets should not be interviewed together. It is also troublesome that despite the abundance of evidence -- from Emmett's bruised face to the print-outs of their text conversations printed around the school -- that the principal would simply dismiss the accusation at that point.

Misguided: Because Matthew is gay and is not out, Emmett isn't going to report the incident.

This issue is certainly complex. We never want to out students who are not ready to be out. This is one of the reasons why mandatory parental notification laws are problematic -- outing youth to potentially unaccepting parents can be harmful. But that doesn't give Matthew an out for what he did. Matthew likely needs support and help for both feeling comfortable in coming out as well as dealing with his evident anger issues, which unfortunately is something most schools who rely on a zero-tolerance punishment model won't provide. Perhaps the show should comment on that piece -- helping Matthew find supportive adults, create a GSA, etc. -- but suggesting there's ever a reason not report bullying is incredibly misguided. Already only 1 in 3 youth tells an adult they've been bullied. This type of messaging may just decrease that amount.

Although the scenario between Emmett and Matthew started off as something that could be called cyberbullying -- impersonation via technology in order to cause harm, its escalation to physical violence should really be called assault. That type of violence moves beyond what most would consider bullying and enters into the sphere of truly criminal behavior. Labeling the entire incident as "cyberbullying" minimizes the harm caused by that assault and furthers a disturbing trend of overlooking more serious behavior under the guise of bullying.

Misguided: Emmett and Bay hack into Matthew's phone and computer to retrieve the sext.

Two wrongs do not make a right. Of course this scenario was necessary for Bay and Emmett to find out that Matthew was gay, but in reality it suggests that stealing others property is justified in order to prevent further bullying.

I understand that in the end, Switched at Birth is a soap opera, constructing outlandish storylines to gain viewership. Yet, with ABC Family's history of great edutainment programing and its campaign against cyberbullying, "Delete Digital Drama," it is incredibly disappointing to see so many misguided messages about how to handle bullying. If more shows featured best practices and challenged the many misassumptions about bullying, perhaps we could actually change the behavior.