Two years ago, we got a major surprise and boarded an emotional rollercoaster.

Not only was I pregnant again, less than a year after having Madison. We'd only known that for a week or so and were still getting used to the idea of having two under 2.

No, that wasn't the biggest surprise we received before my daughter's first birthday.

When I saw my OB in early July to confirm the positive test, she knew that I was sketchy on dates, and after her exam she thought I might be further along than initially calculated. She decided I'd get an ultrasound the next day, so we could work with an accurate date. I was horribly sick and exhausted, and was thrilled to know that I might have less first trimester time left than I'd originally guessed.

Adam was in Texas for work. When I called him to let him know that I'd be having an ultrasound earlier than we thought, he offered to try and cut his trip short. But after we talked for a while, we decided that was silly. My friend was coming to watch Madison, and this was just the dating ultrasound. He was at a new job, and although it would be possible to reschedule his meetings and change his flight, I told him to stay.

Now, we'd gotten bad news at ultrasounds before. Before Madison, I had a missed miscarriage that was discovered via ultrasound late in the first trimester. I knew that bad news was a possibility. We hadn't shared the news with anyone yet and were waiting for the due date, so I didn't have anyone to accompany me and hold my hand in case things weren't OK. But again, we weren't worried. We figured it was a "whatever will be, will be" situation. We were actually pretty proud of our attitude. We had plans to talk that night.

The one friend I'd confided in was watching Madison. She was also a little concerned about me attending this appointment on my own, but I knew she'd be there, no matter what, when I got home.

They brought out the other probe for the ultrasound. Not the belly one. I'd had that before, I knew what to expect, but there's still an intense feeling of vulnerability when you're that... exposed. It's tough to project confidence in that situation.

I was nervous, so I was chatting with the tech, an older woman, as she inserted the wand and got everything positioned. I was telling her how baby number two was quite the surprise, of course a welcome surprise, and yes, it was a little strange being on my own, but my husband was so involved with my daughter, and we were really excited, and on and on and on.

She was pretty quiet, moving the probe as I blathered on. Finally, she looked at me and said "Are you ready for the news?"

My heart dropped. I said, "There's no heartbeat, is there."

"Are you sure you're ready, honey?"

She gestured to the screen. "I see two."

And then it was right there. Two heartbeats. Two sacs. Two babies.

I will never forget this reaction. I was shocked to my core. I could only muster one word.

The tech kindly finished for me.

I will always love her for letting my reaction be OK. (By the way, I've since learned that mine was a pretty common reaction).

After the rest of my appointment, a blur of extra literature and twin terminology (I was carrying fraternal twins, each with their own placenta) and plans put in place for my "high risk" status, I started texting frantically. I told Adam to call me ASAP.

His response: I will. Everything OK?

Mine: You tell me. 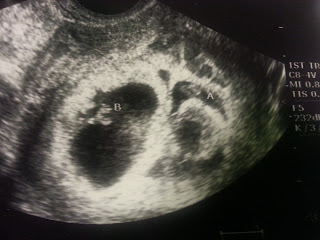 I got home and freaked out to my poor best friend, with our three collective children around us. She had just convinced me that two under 2 was going to be OK. Now I was going to have three under 2 -- three under 18 months, and that was something neither of us knew how to handle.

When Adam and I talked that night, we were still thrown by this news. We just kept thinking of the stuff we'd need. Madison was still a baby herself! What would this do to her? We'd need to double everything -- car seats, cribs, high chairs. We'd need a bigger car! How on earth were we going to manage?

Over the next few days, we let our families and a few more friends know. People were thrilled and excited and full of ideas and ways to help, and we started to come around. We could do this. It was still unbelievable, it was still overwhelming, but we were forming a plan.

The day before Madison's first birthday, as I neared the end of the first trimester, I woke up bleeding.

I'd been warned that bleeding was very common when carrying multiples, but when I called the office, the midwife I spoke to wanted me to come in right away. Just to check. She wanted to know if I could leave and get into the office in the next half hour.

Adam was home this time, but Madison was sleeping. We had a few minutes to decide if we should wake her up and all go, or if I should head in myself. There wasn't time to get a sitter.

So once again, I was alone with the tech and the probe.

And when I drove home, I was again overwhelmed.

Now I was only carrying one living baby.

The doctors were very kind, assuring me that this is very common in twin pregnancies. Many start that way, but don't end that way. There was no reason I couldn't carry Baby A to term.

But how do you process that?

I was sad about the loss, but I left the office still very much pregnant. It was an incredible conflict that I still reflect on. I processed it so differently than I did with my previous miscarriage. In addition, Madison's first birthday was the next day. We couldn't let there be a shadow over that day, so we put our energy into celebrating the babies we had. Our sweet girl who'd had such a tough end to her first year, and our new baby, already missing a part of herself.

I honestly think of Reagan as a twin. A twin without her twin. I wonder if her brother or sister would be as adventurous, as nimble, as physical as Reagan. Or would having a playmate her own age have calmed Reagan down?

How would our family be different? How different would Madison be, as a big sister to twins?

Reagan's twin is intertwined with my memories of the pregnancy. In every ultrasound, Baby B was measured until there was nothing left.

After my first miscarriage, I was physically empty. It was over.

After losing Baby B, that baby was still there. Still part of me. I knew there wouldn't be any procedures, but somehow I hadn't realized that the baby without a heartbeat would just... stay. Part of the pregnancy. Part of me. Part of Reagan. Part of the whole experience.

There was almost nowhere to turn for answers. I knew people who had lost twin pregnancies, but who were no longer pregnant at all. I knew some people with "vanishing twins." But my situation? At the end of the first trimester? Almost none that I could find.

When I shared my story with my online group, one of the girls messaged me. Her baby was also a single twin. Her twin pregnancy ended at the end of the first trimester, like mine. We talk periodically, about that situation. She's gone on to have twins -- born on the same day as their older sister -- and I asked her if having twins helped her process her first daughter's situation.

The answer? Not really. The feelings of twin loss don't go away -- even after having twins.

When Reagan is older, we do plan on telling her how she started out. It's part of her. It's a piece of who she is. A missing piece.

We're thrilled with the family we have. We work perfectly as a family of four. We're not itching to have a third baby, just because at one point, we thought we'd be a family of five.

Two years later and it's still with me. No matter what, I think it always will be. 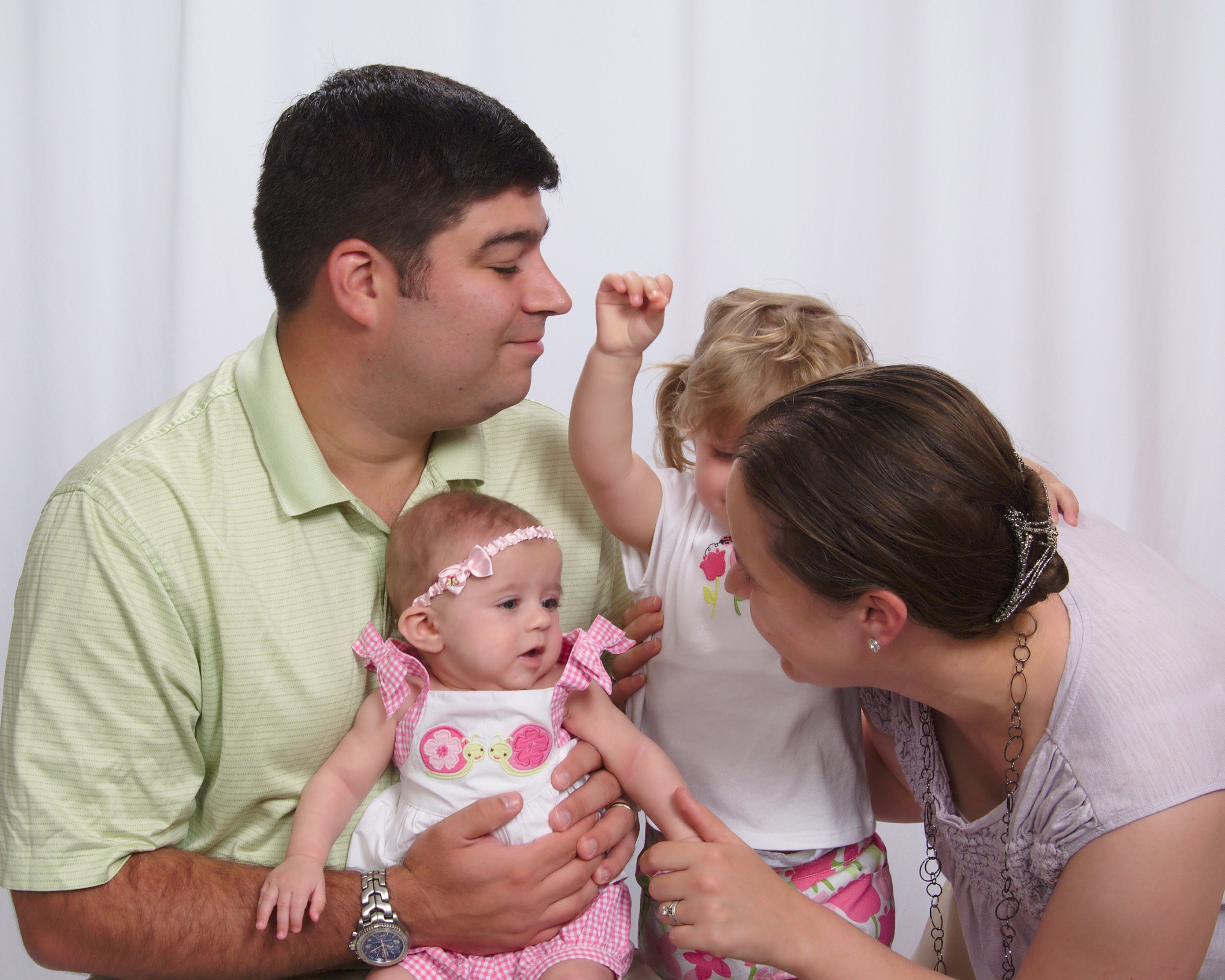 This post originally appeared on From Meredith to Mommy.

More:
Parentstwinslosing-a-babymiscarriageparents-moms
Newsletter Sign Up
Raise the kind of person you'd like to know
Subscribe to our parenting newsletter.
Successfully Subscribed!
Realness delivered to your inbox