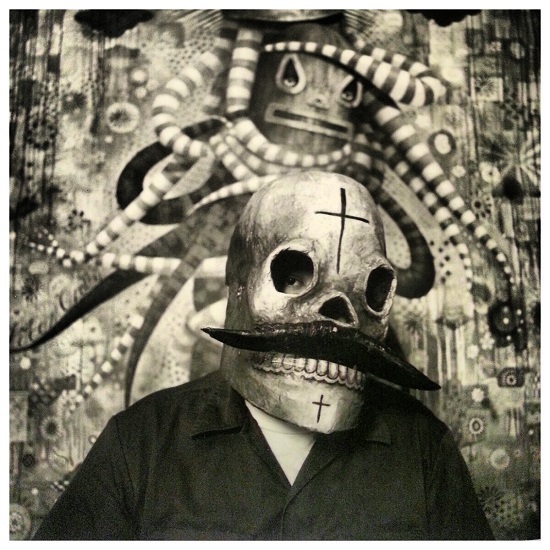 If you look at a painting rendered by Jaime "Germs" Zacarias you might see iconic images recognizable by common popular culture, but Germs is no common artist. Several of his works, including paintings, murals, sculpture, and installation contain the masked luchador that has now become synonymous with his work, directly influenced by Mexican and American wrestling, and a dualist cultural identity. As a Mexican American growing up anywhere in Los Angeles, the polarization of cultures allows for a much richer upbringing because of the ability to blend amongst and within, but also circumnavigate obstacles from multiple perspectives. For an artist, it simply allows for a wider availability of tools from which to tap into. The masks represent a shielding away from society, to disguise yourself in your work and prevent the vulnerability from being exposed. And like any of us, Germs has his own conflicts to shield. In some ancient cultures, the mask represented the ability to hide behind the façade and take on a different attitude, to expose a different part of your person that could only be accepted within that context. This could probably help understand why one of Germs' most iconic images is a luchador mask who wears a cone-shaped hat with the stripes of the American flag and six beetle-like legs, resting on a bed of larvae with an illuminated bean behind him. In actuality, the cone-shaped hat represents the Ku Klux Klan, the significant impact it has had on our culture, and what that mask meant to several followers. That is the artist's way of toying with our perception by overloading us with contrasting pieces.

Another common theme in Germs' work is the Virgin Mary draped at the height of fashion, a la Germs. The image is often depicted with Catholic themes like praying hands, illumination and vibrancy, surrounded by crosses, beans, and tentacles. The presence is dedicated to his mother like a consistent shrine and dedication to her memory as a way to sustain the metaphysical realm. Only an exceptional artist like him can create such dark and controlled chaos, which is why art historian, Isabel Rojas-Williams, has referred to him as the modern-day Dali because of his striking and bizarre juxtapositions. Throughout all of civilization religious imagery has played a pivotal role in the arts as a way to help understand the human condition through divine fidelity, but Germs does it as a trickster. The images are bold coupled with a dark sense of humor, similar to satirical animation. Germs has also taken the simple bean, the staple-food of the Mexican and Mexican American community, and heightened it to the level of worship. The image is intertwined in most of his work as a central theme and figure, often depicting characterizations in its oval and rounded shape. It could have a political presence, such as empowerment or identity because of its pejorative usage of referring to us as "beaners," but with Germs' apolitical stance, and his playful choices and distribution of imagery, it probably symbolizes something offbeat, like perhaps his son. After all, the image is also tattooed on his body.

One of the most compelling symbolic approaches to his work are the tentacles that swarm his canvases and the bodies on some sculptures. They intermingle, cross paths, and clash at different intersections. While at his studio, I gave him my interpretation of what they meant to me since he often includes traditional Los Angeles associations. The city of Los Angeles is a fragmented metropolis divided by gerrymandering principles, infrastructure, and separatist neighborhoods. This has been the history of the city since its inception, thus, when we cross paths at intersections there is often a cultural collision. I view them as a metaphor for the tentacle-like octopus that is L.A. infrastructure. They represent a series of options like choose-your-adventure science fiction novels and an escapism to different worlds. For Germs, this collision could be seen as plagued by pollution, filth, and urban decay. A bit dystopian while utopian, futuristic and regressive, liberal and maybe totalitarian, regional yet universal, dark and somber, but progressive. That is a Germs piece, a compulsive need to overload the scene with layers of intricate plotting that is interpreted by the observer's wild imagination that hardly needs to make sense.