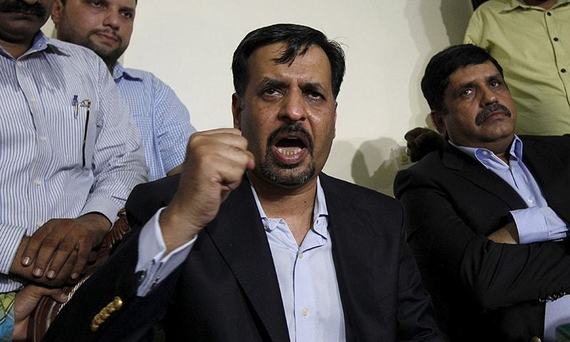 Mustafa Kamal,44, has revolted from one of Pakistan's most feared political parties, the MQM. What next? (Photo source: Dawn, Pakistan)

The Muttahida Qaumi Movement (MQM), an influential, controversial yet persistently relevant political party which has simultaneously controlled Pakistan's business capital city of Karachi for several years through bullet and ballot, is in the brink of crumbling as a forty-four year old charismatic former mayor of Karachi, Syed Mustafa Kamal, is now spearheading an internal revolt. The ex-MQM senator is challenging the hitherto undisputed authority of Altaf Hussain, 62, the party's London-based exiled founder.

Until a few years ago, even Hussain's opponents feared him so much that they would think twice before publicly criticizing him because his diehard supporters like Kamal would, ironically, go to any extent to punish the critics of their 'bahi' [brother]. The American journalist, Steve Inskeep, in his book on Karachi, Instant City, says many people in the city of nine million people look at the MQM "as a group of thugs, or fascists--although some looked about them to check who might be listening before they said things like this." Murder, torture and intimidation against its rivals and defectors alike have remained the hallmark of the MQM. A leader among the MQM's fresh rebels said, their minds and hearts had finally come on one page and spoken up: It is the time for us to disassociate ourselves from all obnoxious attributes linked to the MQM "for the sake of our future generations."

Kamal has announced a new political party for which he has still not decided a name. He intends to use Pakistan's national flag as his new party's flag while he strives to convince senior MQM leaders to abandon their old party and join his.

The MQM, founded in 1984, aggressively and oftentimes violently guards the rights of the Mohajirs, the local word used for the millions of the Urdu-speaking immigrants who left India in 1947 at the time of the Partition to come to the fledgling Muslim country of Pakistan. The Mohajirs, on their arrival, felt unwelcomed by the local Sindhi and Pashtun populations as the latter looked at this influx skeptically fearing that the newcomers would outnumber them, grab their lands, employment and educational opportunities. That is precisely what followed.

According to an International Crisis Group report, during the 1941 population census, the three largest ethnic groups in Karachi were the Sindhis (60%), Mohajirs (6%) and the Pashtuns (3%). However, the exodus of the immigrants caused a dramatic demographic imbalance against the indigenous population as the Mohajirs (51%) outnumbered the Sindhis (14%) and the Pashtuns (3) in the population census of 1951. This demographic gap further widened in the subsequent years as the 1981 census showed the Mohajir population increase to 54 per cent. This triggered severe ethnic strife and violent clashes. The Mohajirs formed the MQM to guard their interests but soon got distracted from their original mission or simply got corrupted by opting for a dangerous path.

"The MQM built up a powerful armed wing, which targeted not only Sindhi and Pathan militants but journalists and others who dared to criticize the MQM in public," writes Anatol Lieven, the British author in his book, Pakistan: A Hard Country, "Torture chambers were established for the interrogation of captured enemies. Every morning would see its harvest dumped by the roadside: murdered activists from the various sides, or unlucky passers-by."

Hussain, who left Pakistan in January 1992 to go to London for medical treatment, never returned. He has remotely yet effectively controlled the MQM from London. The party emerged as the voice of the middle class Urdu-speakers, gained recognition as a disciplined party that treated all its activists with respect and offered extraordinary opportunities of career advancement. Even someone like Kamal, with no rich or politically powerful family background, could climb to become the mayor of Karachi because of the MQM's culture of empowering the middle class. There has only been one precondition to availing all these privileges offered by the MQM: Extending unconditional loyalty to Hussain, the party chief. Within the MQM circles, disloyalty to Hussain is deemed as big a sin as committing incest or punishable with murder, according to a report in the Herald magazine.

The MQM has had a love and hate relationship with the Pakistani military establishment, which is dominated by the ethnic Punjabis. The Sindhis and the Pashtuns believe that the military establishment pitted the Mohajirs against them. The left-wing Pakistan People's Party as well as the right-wing Jammat-e-Islami both view the MQM as a project of the big brother---a reference to the country's military establishment---in order to rob them of their vote bank.

The MQM, on the contrary, continuously presents itself as the victim whose activists have faced military operations, arrests and, above all, denied treatment as equal patriotic Pakistanis. Six decades after leaving behind everything in India and coming to Pakistan, the Mohajir patriotism is still questioned by rival political parties and sections of the army and the media. The establishment often humiliates the Mohajirs by blaming them of having ties with the Indian intelligence agency, the Research and Analysis Wing (RAW), and even accuses it of plotting with the Indians to disintegrate Pakistan.

No political or military leader in Pakistan has ever had such a long and persistent public following as Hussain although he has lived away from his people for more than two decades. While this uncommon popularity has made Hussain profoundly arrogant, authoritarian and controversial, it has also made his opponents envious. Television networks, for instance, would broadcast his telephonic speeches live for several hours. In London, he has been under investigation for charges as serious as murder and money laundering. In 1990s, the generals in the Pakistani army tried to shatter Hussain's influence by sponsoring a breakaway faction of the MQM called the MQM Haqqiqi (or the real MQM). The spilt hardly weakened Hussain's influence as he instead got a new lifeline during the time of General Musharraf, himself a Mohajir, when Hussain smartly controlled damage by supporting the then military dictator.

Given the history of failed attempts by the military establishment to destroy Hussain's ubiquitous popularity, the refresh revolt led by Kamal cannot escape tough questions. Stability in Karachi, which generates 70 per cent of Pakistan's GDP, is extremely essential for national growth and prosperity. This political earthquake will impact Pakistan's internal politics as well as its foreign policy. If the Pakistan army is behind Kamal, the Friday Times editor Najam Sethi recalls, "such interventions have proved disastrous for state and society. They end up distorting the political system and polluting the political environment by creating monsters in the form of non-state actors."

While Pakistan's democratic system needs strengthening institutions instead of individuals by dismantling the power of godlike figures like Hussain, the script Kamal is following sounds very similar to the ones the army had used in the past. For instance, Kamal accuses Hussain of having connections with the Indian intelligence agencies, an allegation the establishment has used for decades to discredit and tarnish the public image of almost all of its political opponents in the past. Given the army's preoccupation with India, anti-Indianism is no longer a very appealing reason to weaken a leader's authority. By using the India card to settle scores on the domestic political front, Pakistan would take the already bumpy India-Pakistan diplomatic ties from bad to worse.

In addition, the MQM under Hussain has vocally criticized the presence of the Taliban leadership in Karachi. The military establishment, on its part, has remained in a state of denial about the presence of the Taliban and perhaps foreign fighters, including those supportive of the Islamic State of Iraq and Syria (ISIS). If Kamal, backed by the military, succeeds, it might temporarily weaken the MQM, but in the long-run it remains unclear if Kamal can provide the kind of leadership Hussain provided to the Mohajirs of Karachi two decades ago. When Hussain led them, the desperate and unorganized Mohajirs were eagerly looking for a leader who could provide them an identity, hope for a better future, stable employment and raise their voice in the parliament. He accomplished all of the above. Two decades later, the Mohajirs no longer feel vulnerable. They have come a long way as more educated, wealthy and politically and socially powerful. The biggest challenge now for Kamal is to keep so many ambitious Mohajirs together.

Furthermore, a marriage between the army and Kamal will ultimately benefit Jihadist organizations that have found sanctuary in Karachi. In spite of the Pakistani army's claims of having cleaned the country's tribal regions from Jihadist elements, there is no evidence of the army and intelligence agencies completely cutting ties with urban extremist Islamic groups that have found sanctuary in Karachi. The stakes are very high in the wake of the fresh rebellion in the MQM but another anti-India, pro-army and hyper-nationalist political party is surely not the answer for Karachi or Pakistan.