In partnership with The Monarch Butterfly Fund, Monarch Watch and other partners, The Nobelity Project is releasing my new short film on the Monarchs and how we can all help save the migration. Watch the film; read the story; do your part.

Monarchs: The Milkweed Mission from The Nobelity Project on Vimeo.

When I was kid, the bi-annual migrations of Monarch butterflies through Texas was pure joy - blue skies filled with clouds of giant, orange butterflies winging south in the Fall and north in the Spring. We knew the Monarchs went to Mexico for the winter, but not much more as this was years before the decades old mystery of the monarchs was solved by the 1975 discovery of the Monarch's winter retreat atop forested mountains in Michoacan.

I first saw the winter spectacle twenty-plus years ago when writing a story about the Monarchs for Texas Monthly magazine. Levels of tourism in the Butterfly reserves were still low, and my adventure began with an old man pointing an ancient Spanish blunderbuss at me in an attempt to levy a small toll to drive up the dirt road to the base of El Rosario reserve. I'd given a ride to a local school teacher and she angrily poked him in the chest until he apologized. "Bienvenidos a Michoacan," he said timidly as we drove away. 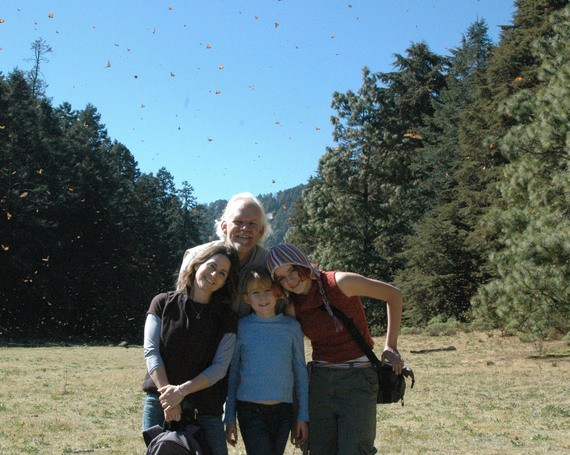 In addition to seeing millions of monarchs, I volunteered that day to help heft heavy iMax film canisters up the steep trail of El Rosario Mountain for a crew that was capturing some beautiful footage of a sky filled with orange. Five years later, my wife and I took our daughters to Michoacan and I began filming the reserves and the migration myself, a part-time mission that I've continued for the past seventeen years. During these twenty-two years, my informal observations of the decline in Monarch numbers have matched the formal census done annually by key Monarch experts. In short, the Monarch populations declined by 90% since the early nineties. A big increase in last year's survey was encouraging but a late season snow-storm in Mexico killed millions of butterflies in the over-wintering sites. Unless this long-term trend is reversed, we are going to lose the Monarch migration entirely.

The decline of the Monarchs is caused by multiple factors along the migration route: illegal logging in the winter reserves (cutting which Mexico has reduced but not eliminated and one of the factors in last year's mass freeze ); climate change, drought and over-grazing in Northern Mexico and South Texas; and by the loss of American prairie and the rise of industrial agriculture and its massive dependence on mono-cropping and chemicals, the enemies of butterflies and bees and all underlying insect populations that are key to pollination of our food crops. 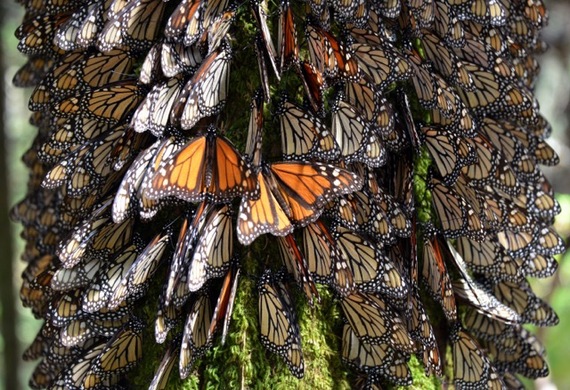 To me, the Monarch migration is nothing short of a miracle, one of nature's incredible systems of interdependency upon which much depends. Taking advantage of north winds in the fall, millions of Monarchs fly thousands of miles from Southern Canada and much of the U.S. to a dozen specific mountaintops in Central Mexico (a separate, smaller Monarch population west of the Rockies migrates to their own forested areas along the California coast). Once in Mexico, the principal Monarch population huddles together on Oyamel Fir trees against the winter cold, conserving energy on cool, cloudy days and bursting into the air on sunny days to mate, a process that takes hours.

I've been up the mountains to many of the reserves, but my favorite is Cerro Pelon, where we first rode up on horseback with our young daughters and where this December my family and I will go back up the mountain together with our friend Joel Moreno, a great local guide who owns JM Butterfly B&B in the tiny town of Macheros at the base of the mountain. Last year, Joel and I found a butterfly tracking tag that traced back to a tagging in Eastern Canada, a winged journey over 3,000 miles by a butterfly weighing just half a gram. Joel's family also operates the only restaurant in Macheros, serving fresh trout from their trout farm and fresh avocados from their orchards. The Nobelity Project is partnering on an organic garden at the tiny primary school, and we believe Joel and his neighbors are one of the main keys to saving the monarchs. 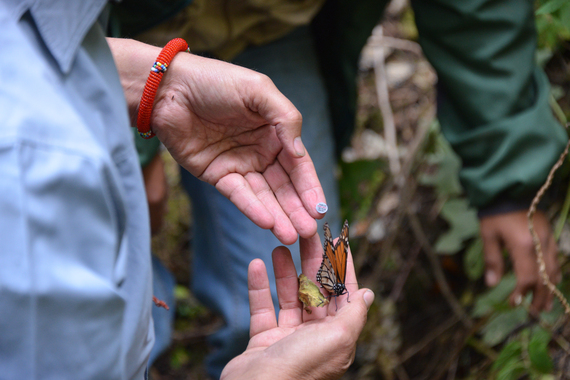 When the weather warms and winds swing back from the South, the Monarchs begin their journey north to search for Milkweed plants where the females can lay up to 400 eggs each. Monarchs can only lay eggs on one of many species of Milkweeds, a family of flowering pollinator plants with leaves that nourish Monarch caterpillars as they grow, and which also make the butterflies bodies toxic to birds.

The caterpillars make their chrysalis of course, and soon emerge to continue the journey north, mating along the way and finding more milkweed on which to lay eggs. No Monarch who flies north from the reserves in Mexico returns the following winter. Instead, there are 3 or 4 generations of butterflies between, with the last "super" generation living the longest by far, flying all the way south, wintering over, then starting back north again. How do these "newcomers" find the same twelve mountaintops year after year? No one knows.

Without milkweed plants on which to lay eggs, and pollinators for fuel, the Monarchs cannot survive. There is a nationwide movement to plant mass numbers of milkweeds and pollinators across the flyway, a butterfly highway from Mexico to Canada. This is something every individual, school and business can do to save the migration. If you're game to help save the Monarchs, you can learn more about planting a Butterfly and Pollinator Garden at.

Not only will you be a part of the solution, you'll have the opportunity to see Monarchs finding your garden, and you can watch the full cycle of egg to caterpillar to emerging butterfly. Last Spring, we had dozens of Monarch caterpillars on the butterfly garden at our home in Austin, and now our milkweeds have been stripped again by new caterpillars and a generation of Monarchs that I hope to see in Michoacan in December. In Austin, Lady Bird Johnson Wildfower Center, Barton Springs Nursery and The Natural Gardener have all been part of The Nobelity Project's work to plant Monarch gardens at local schools. As we say in all our work, local acts have global impacts. 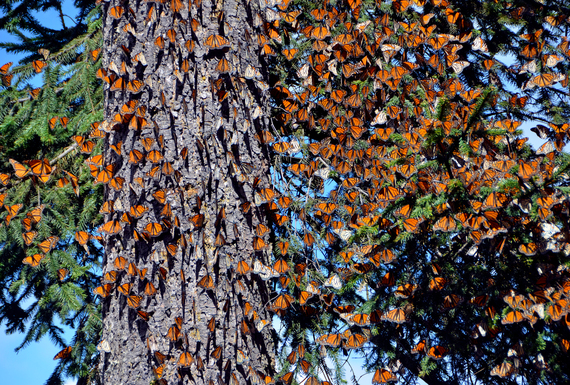 The challenges created by the ethanol mandate, industrial scale agriculture and GMO crops designed to use with pesticides and herbicides that destroy all other plants is a more difficult challenge. The ethanol mandate was created to help make America more energy independent but growing 90 million acres of corn for fuel has proven to be an environmental disaster that destroys our natural world and the pollinating insects we depend upon, while flooding the Mississippi River with chemicals that create an ever-expanding dead zone in the Gulf of Mexico. Only 11% of our corn crop goes to the American food supply, most of it to high fructose corn syrup, one of the basic ingredient of American obesity and diabetes. With energy prices low and renewables more competitive, I strongly believe it's time to end the ethanol mandate.

We don't hear much talk in this Presidential Election about America's farm policy, the ethanol mandate, our over-dependence on chemicals or GMO crops. But the world inherited by future generations depends on better understanding of the natural world and actions today that will make the world and our food supply sustainable for pollinator insects like the Monarchs and bees, and for our generations of Americans to come. Stepping off my soap box, I should add that readjusting the American system of agriculture will take much time and the Monarchs need much faster action.

"We need to look at other solutions, at land that is more readily available," says Karen Oberhauser, Monarch biologist at the University of Minnesota. "We need to be creative, to look at roadsides, utility and railroad rights-of-way, Conservation Reserve Program (CRP) land, and yards. In reality, vast expanses of lawns are monocultures of grass; just like the corn fields, albeit on a smaller scale. In a single year, a Midwestern lawn can be converted to a habitat that resembles the prairie that was here before, harboring dozens of species of the birds and insects that used to live here, including, if we plant milkweed, monarchs."

It's time to end the Ethanol Mandate. It's time to greatly reduce our dependence on chemical agriculture. It's time to plant butterfly gardens. It's time to take the chemicals out of our gardens and our yards. (One of my favorite examples: when you spread fire ant bait to kill fire ants, you kill the big red ants that the fabulous Texas Horned Lizards (horny toads) depend upon for food). I have an active social media presence and my facebook friends are constantly amazed by my photos of the foxes, armadillos, owls, butterflies, green anoles or "chameleons", humming birds, tarantulas (fabulous creatures) and many others that surround our home. My bee-keeper pal David Stalker just handed me five pounds of fabulous honey that came from just one bee hive at our home. People comment that we must live in some Garden of Eden, but in fact we live in a garden where the big box chemicals are no longer in use. The world IS a garden of Eden. Our job is not to destroy it.

Want to visit the Monarch reserves in Mexico? Check out Joel and Elena's B & B and guide service in the tiny town of Macheros at the base of Cerro Pelon.
http://jmbutterflybnb.com

Join the Nobelity Project's work for Education for All and support our tree-planting partnership with our Michoacan partners, Alternare A.C.
www.nobelity.org and www. Alternare.org 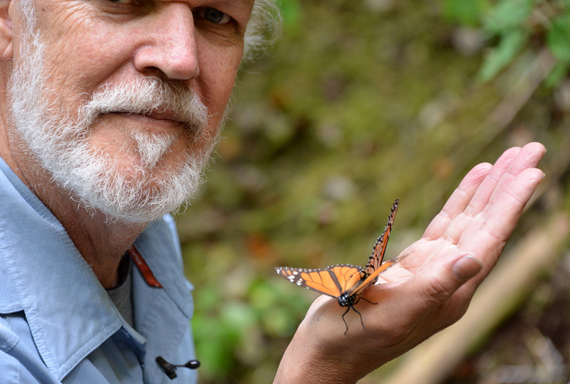