Playing at the legendary Greek Theatre in Los Angeles on Saturday, July 16, the Monkees were so sensational that I simply can't not tell you about it. Yes, those Monkees. As in, "Hey, hey, we're the..." They're unabashedly celebrating their 45th anniversary with a new tour, and it's a brilliant evening of entertainment. I know, I know -- all those preconceptions. Forget 'em. The Monkees deliver a dazzling showcase of hits, energy, personality and fun that simultaneously acknowledges its vintage and scintillates with immediacy. Greatness. After the show, I had to go searching for my socks. 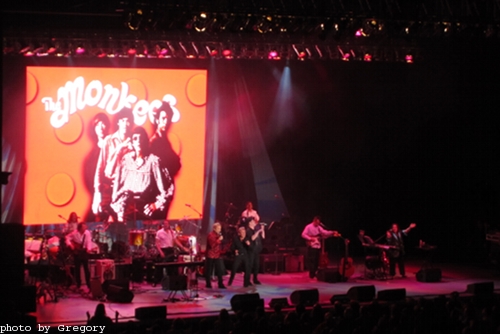 The funny thing about the Monkees is that unlike the comparatively short-lived Beatles (whom they've outlasted for over 40 years now!), this is a pop band that practically wrote the book on revivifying themselves and remaining indefinable. Before the brilliant mop-top mockers the Rutles appeared, the Monkees came together quite literally as the "Prefab Four" (via auditions for their eponymous hit TV show), and somehow -- over many years, associated songwriters, session players and power plays -- they've become the unlikeliest of pop institutions: the fake band who got real (onstage, multi-instrumentalist/singer-songwriter Peter Tork openly notes their "Pinocchio complex").

It takes chutzpah, frankly, to be your own opening act -- which the Monkees gave us via hilarious and nostalgic TV and film clips, as well as their notorious commercials for Kool-Aid and Kellogg's. Then their super-tight touring ensemble provided an overture of delicious riffs from the Monkees' potent canon of hits. Shortly thereafter, the crowd went bananas as Micky Dolenz, Davy Jones and the aforementioned Mr. Tork took the stage ("Hey, hey," accompanied by their own theme song) and proceeded to rock us, pop us, serenade us, showtune us, trip us, joke us and opine at us for well over two impeccably groovy hours. 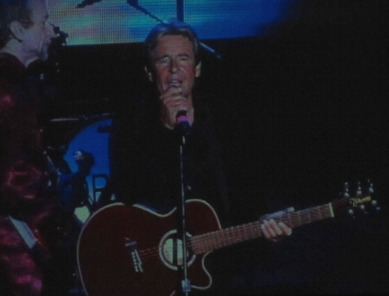 Overall it was almost shocking to be inundated with essentially all of the Monkees' many hits -- about 40 tunes, no mean feat! Early on, such treasures as "I'm a Believer," "Look Out (Here Comes Tomorrow)" (Neil Diamond returning in spirit for more "Love at the Greek"?) and "Mary, Mary" wowed us with the brilliance behind this band. Wrapping up, we got stellar versions of "Daydream Believer" and "Pleasant Valley Sunday" (the latter a veiled punk anthem by Gerry Goffin and Carole King). In between, we got surprises like Davy "pulling an Elvis Costello" and apparently changing the setlist to sing "Girl" for both his granddaughter and recently-deceased TV producer Sherwood Schwartz (producer of "The Brady Bunch"), plus a salute to Paul Nichols and the inimitable Paul Williams, with "Someday Man."

I was most impressed by the six-strong block of songs from "Head" (the Monkees' gloriously bewildering 1968 art film) -- which was a personal thrill, as the "Head" project and I were simultaneously conceived, and we gestated in tandem, and then (to put it literally) the Monkees' "Head" came out right when mine did (and in the Year of the Monkee, er, monkey). "Head" is my pop-culture twin, the brother I never had, so to experience its gems live (particularly Peter doing the wild "Can You Dig It," Micky on the sublime "Porpoise Song" and Davy dancing up a storm for Harry Nilsson's magnificent "Daddy's Song") turbo-charged my DNA. 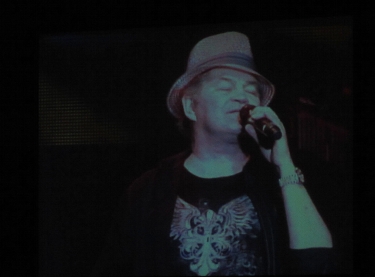 Throughout the evening, the band's patter (a mostly forgotten art form, judging by today's über-serious artists) proved delightful. Peter cordially dissed the Rock and Roll Hall of Fame (which, mysteriously, has still not inducted the Monkees) and also revealed much of the history of the Monkees, from bubblegum to band. Micky gave us the James Cagney, and chided those who'd dare sell his genuine "Monkee sweat" on eBay. And Davy took the lion's share, from carping about Axl Rose stealing his dance (true) and Justin Bieber stealing his hairstyle (also true), to joking about being mistaken for iconic Los Angeles emcee, disc jockey and trendsetter Rodney Bingenheimer (who doubled for Davy in the "Monkees" episode, "The Prince and the Pauper," and attended the show). "Hey, at least he's got a steady job!" 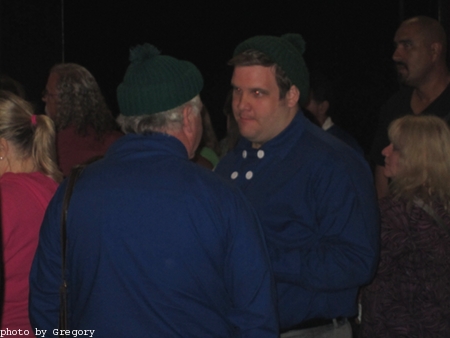 Quite unlike the three corporeal Monkees we observed, Mike Nesmith is now
a free-floating spirit who can possess victims at will, as shown.

In particular, I marveled at how satisfying it is when well-drawn personalities take the stage at a show like this (not that there is any other show like this). With Peter Tork you get some sillies, but beneath that an earnest and dedicated artist who brings solid musical chops. With Davy Jones, you get a sort of perpetual-motion machine in the form of an incredibly endearing performer (and dream-boyfriend for all the ladies who still scream for him). And then there's Micky Dolenz -- what a voice! Seriously. No, not just the Cagney impersonation. I mean, when he got up there and owned epic songs like "She," "Randy Scouse Git," "Words" and "Goin' Down," we had a world-class pop singer -- like, Roy Orbison-level, Freddie Mercury-level -- giving us chills. 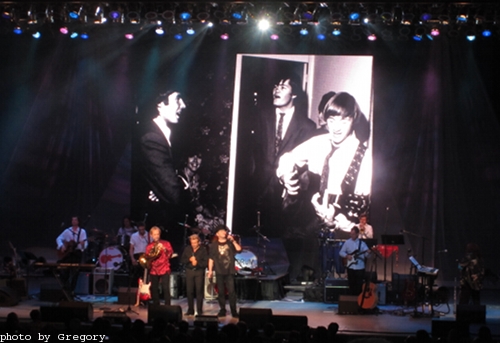 So these Monkees... are they relevant? Oh, absolutely. More than ever. Given their unique evolution, there's much to learn from them regarding image, presentation, promotion and talent. But beyond that, how many relationships last 45 minutes, let alone 45 years? Sure, what we lucky participants enjoyed verged on pop perfection (with the minor exception of some dodgy near-harmonies in "Valleri"), and could be knocked for being too slickly-produced -- but amidst the harsher entertainments of a world in many ways gone terminally cynical, these peace-loving, do-gooder, happy-go-lucky heroes really are at the top of their game. And they've still got something to say.

For the uninitiated, here's a taste of a movie that makes most movies seem a bit lazy and uninspired -- The Monkees, in "Head":