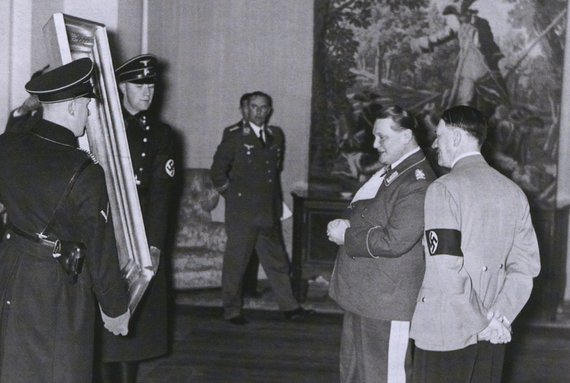 Hitler presents Goering with a painting

I am not pursuing the opportunity to have a date with George Clooney, as was the lead-in to the story on the evening news, but will eagerly look forward to the opportunity to see him in the upcoming feature film: The Monuments Men, based on the book of the same title by Robert M. Edsel. I studied under one of those "monuments men" -- S. Lane Faison -- in fact he was my professor for my art history honors tutorial at Williams College. It was only later that I learned of his involvement in this unprecedented effort to recover and return some of the greatest works of Western Art -- plundered by the Nazis during World War II. I wished he hadn't been so humble.

I had read Lynn H. Nicholas' book, The Rape of Europa, some years ago. On a trip to Florence in 2011, I stumbled upon the Museo Casa Rodolfo Siviero, a museum in the house of Rodolfo Siviero who was an Italian secret agent and art historian, involved in the work of recovering works looted from Italy by the Nazis.

The story of the "monuments men" is fascinating and truly deserving of the attention it will garner through this film. Irene Rawlings calls it "the greatest treasure hunt in history." Denise DiFulco, writing in the Williams College magazine, notes that those who served were an unlikely cast of characters -- "museum directors, curators, art scholars, educators, artists, and archivists. Most had established art careers and families. Their average age was 40." They traded in their tweeds for a uniform and came to the rescue of a trove of artworks stolen by the Nazis.

I was particularly intrigued to read of Edsel's interview with my art mentor -- Lane Faison, in 2006. They met on Nov. 1, just nine days before Lane's death, and 15 days short of his 99th birthday. DiFulco recounts that Edsel had anticipated no more than 10 minutes of Lane's time, due to his declining health. Instead, they spoke for close to three hours. It would seem that as Lane looked back on his life and legacy, this period and these exploits were very important to him, as well they should. It is true that he was a member of the so-called "Holy Trinity" of art scholars at Williams College, whose students, through their various achievements, came to be known as the Williams "art mafia;" but rescuing and preserving these irreplaceable works was another great achievement in his life.

There were up to 350 men and women who served in this area of activity at the end of the war, and more than 5 million cultural works protected, preserved, or recovered by this unit. What we take for granted when we go to a museum stood at risk of being lost forever, as the Nazis not only stole vast amounts of art, but were also planning to destroy it towards the end of the war.

Thankfully, Lane was assigned to the OSS Looting Investigation Unit, charged with trying to get a handle on the bigger picture of German policy so that a more comprehensive plan could be developed to preserve and recover what was taken. Lane worked at the salt mines at Altaussee (the main repository for the paintings destined for Hitler's museum in Linz) just east of Salzburg, Austria where thousands of artworks were stored in the tunnels. The mines contained 6,755 paintings, 1039 prints, 230 drawings as well as sculptures, tapestries, furniture and other objects of art. Stored artworks included Jan van Eyck's Ghent Altarpiece, a Michelangelo Madonna and Child sculpture stolen from the Church in Bruges, Belgium. As Lane noted in a report on file with the National Gallery of Art, "[l]ooting always accompanies was, but Nazi looting, and especially Nazi art looting, was different. It was officially planned and expertly carried out. Looted art gave a tone to an otherwise bare New Order."

Lane would return to Williams College where he taught for more than 40 years - and I am thankful that my time there coincided with his and I was able to spend a year working with him, writing the first chapter of his book. He has said that what he learned while working to recover looted art helped him immensely as a teacher of art history. He never mentioned it directly, but there was always something special about him. He was a key player in one of the great adventures in all of art history. I look forward to the movie and I hope we all find a new appreciation for these overlooked heroes without whose efforts our cultural legacy would be so much the poorer. 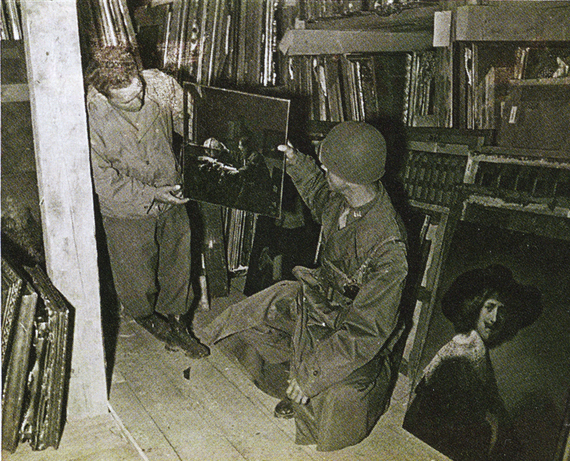 Vermeer's "The Astronomer" found in the Altaussee mine 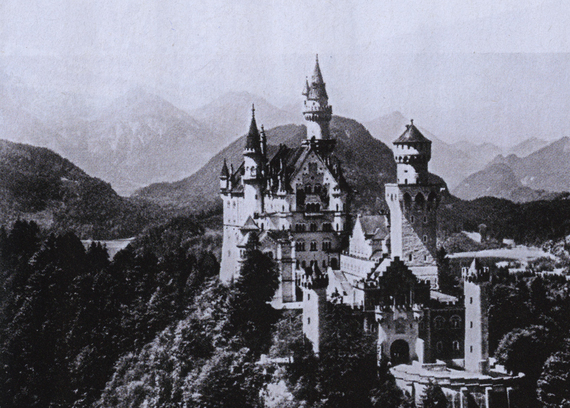 CORRECTION: A previous version of this post incorrectly stated that The Rape of Europa was written by Robert M. Edsel. The book was written by Lynn H. Nicholas. The post has been updated to correct this.