In 1971, between January 31 and February 9, a forest of trees flew to the moon with three astronauts, one a former "smokejumper" firefighter. They orbited the moon 34 times during the Apollo 14 mission, in the command module "Kitty Hawk," and returned to Earth.

The trees were 500 seeds from redwood, loblolly pine, sycamore, Douglas fir and sweet gum. The seeds were the PPK, or Personal Preference Kit, of Astronaut Stuart Roosa, as a tribute to his former employer, the U.S. Forest Service.

Researchers wondered if the seeds would germinate after being weightlessness.

For several years after returning to earth, the seeds sprouted and thrived in laboratories of the Forest Service. Hundreds of little trees that, now, had nowhere to grow, were given away.

It was the nation's Bicentennial and trees went to nearly every Western and Southern state where the tree species grew.

They were planted in schoolyards, at state capitals, museums, historical societies, and people's yards.

A Loblolly Pine was planted at the White House.

The trees were planted in Brazil, Switzerland, and presented to the Emperor of Japan

Washington Square in Philadelphia has one.

Another one at Valley Forge, in the International Forest of Friendship.

President Gerald Ford issued a telegram for all the Moon Tree Ceremonies:

I send warm greetings to those who attend this unique ceremony dedicating a small tree which was taken from earth to the moon on January 31, 1971, aboard Apollo 14. This tree which was carried by Astronauts Stuart Roosa, Alan Shepard and Edgar Mitchell on their mission to the moon, is a living symbol of our spectacular human and scientific achievements. It is a fitting tribute to our national space program which has brought out the best of American patriotism, dedication and determination to succeed.

Planted in this community in our bicentennial year. May this young tree renew our deep-rooted faith in the ideals of our Founding Fathers and may it inspire us to strive for the kind of growth that benefits our own citizens and all mankind.

No one thought to keep track of the trees that had gone to space.

Eventually, the trees were forgotten.

When I was young, NASA was everywhere. We watched rocket launches on television at school. As a Junior in high school, my heart filled with sadness as I watched the Challenger explode.

Forty-five years later and my ten-year-old son has a passion for space. He has listened, in a focus group, as Astronaut Jon McBride talked about his own journey as a NASA astronaut.

This weekend, while visiting Kings Dominion Amusement Park in Doswell, Virginia, my son reminded me he had read about a Moon Tree here.

Across from the Eiffel Tower, there is an Old Time Photo attraction.

Next to the attraction is a small wooded area.

Inside that small wooded area is the Moon Tree. 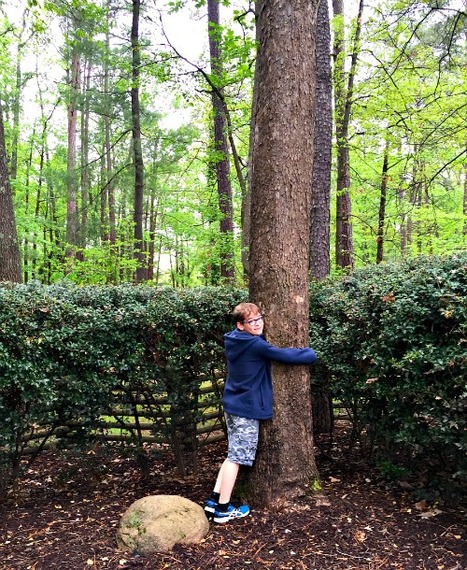 A tree, that grew from one of 500 seeds that orbited the moon 34 times and came back to Earth. It was part of the Apollo 14 project.

A tree, which by all appearances is simply a tree.

There is no plaque that identifies it.

There is no spotlight that beams from the heavens and makes it stand out from the other "ordinary" trees.

But this tree has a history.

It's been to places out of this world and come back as a symbol of NASA's Apollo 14 mission.

It is the legacy of a man, who once was a "smokejumper" fighter, who went on to be an astronaut that orbited the moon 34 times.

It is a tree that represents our countries Bicentennial.

Maybe it serves as a reminder that great things are sometimes forgotten, but their stories live on if we're willing to listen.

Julee is a quirky, dorky, Virginia Transplant with an appetite to taste the world, meet its desserts and tell their stories. She enjoys traveling, writing, obsessing over Bon Jovi, watching movies, being a mom, and enjoying life's journey. She writes at Mommy's Memorandum about the chaotic comedy she's come to call her life.