Will the rise of intelligent machines transform our lives for the better -- or push us into the abyss? It depends on whom you ask.

Some people say self-driving vehicles, personal robots and the like will usher in a new era of convenience and leisure while freeing workers from dull and often dangerous jobs. Others worry that the emergent robotic workforce will mean economic devastation for workers, who, after all, depend on those jobs to support their families.

And then there is the fear -- expressed by the likes of Elon Musk and Stephen Hawking -- that as intelligent machines grow ever smarter and more capable, they may threaten our very existence.

Dr. Moshe Vardi, a computer scientist who has studied automation and artificial intelligence (AI) for more than 30 years, has his own nuanced view. As to whether intelligent machines are beneficial or detrimental, the Rice University professor says simply, "I view them as both."

Intelligent machines will bring convenience and safety as well as higher productivity, he continues, but they will also throw millions of Americans out of work.

Vardi spoke about smart machines last week in Washington, D.C., at the annual meeting of the American Association for the Advancement of Science. The Huffington Post caught up with him afterward to pose some pointed questions.

Industrial robots have been around for decades. Why are they and other autonomous systems suddenly such a hot topic?

We seem to have reached a tipping point with industrial robots, as their cost has continued to come down and their capabilities have continued to go up. Take a look at U.S. manufacturing. We have reached an all-time high in output, but employment is below its 1950's level.

The myth is that all the jobs are going to China. Actually it's mostly because of factory automation. There are already about 260,000 robots at work in U.S. factories, and the annual growth is in the double digits.

Which technological advances in particular have been most important in the development of machines that can replace humans for many tasks?

For industrial robots, we have seen significant improvements in terms of both mechanical engineering and control engineering. These robots are smarter, more agile and cheaper!

For example, the Baxter robot is a two-armed robot for simple industrial tasks such as loading, unloading, sorting and handling of materials, which it can learn by watching a human do these tasks. It is sold for $25,000, which makes it suitable for small and medium-sized companies.

Suddenly we have new low entry point for companies. You don't have to be a Ford or a General Motors to buy factory robots.

Autonomous vehicles are seen as a key part of the robot revolution. Why are they so important?

The automobile has probably been the most significant industrial product of the 20th century. It has catapulted U.S. industry to its peak and has had a profound impact on U.S. geography, permitting the growth of suburbs and exurbs. Automating driving will unleash a dramatic change, akin to the introduction of the Ford Model T in 1908.

Following that, we can expect the bulk of our logistical supply chain to be automated. For example, a product from China will be offloaded from a container ship by an automated off-loader, taken to an e-commerce warehouse on a driverless truck, packaged there by a robot, driven to its destination on a driverless truck and delivered to the customer's doorstep by a drone.

You've said you expect driving to be automated within 25 years. Will it really take that long? What are the barriers to the rise of self-driving cars?

We will have to re-write many laws that govern the use of automobiles on public roads. Since these are usually state laws, the process will be long, slow and agonizing. For example, current laws typically require a moving vehicle to have a driver. Will the software controlling the car be considered a "driver"? What about liability laws?

How will our lives be changed by self-driving cars? What will be the benefits, and what problems will they cause?

Worldwide, about 1.25 million people die from auto accidents per year. Something like 95 percent of these accidents are caused by human error. So by automating driving, we could save about a million lives a year.

At the same time, this change will have a huge economic impact, launching whole new industries and destroying old industries. About 10 percent of the U.S. workforce operate vehicles as part of their job, and the automation of driving will eliminate millions of jobs in the U.S. alone. But with so many lives saved, I believe it is a moral imperative to deploy the technology.

By automating driving, we could save about a million lives a year. Dr. Moshe Vardi

We can expect an epic battle between car companies and computer companies to dominate the driverless cars market. Also, cars will be used much more efficiently, so car ownership may plummet by up to 80 percent. We can also expect a significant productivity boost from self-driving cars, since the time we now spend behind the wheel is usually nonproductive.

What will happen to the truck drivers, cab drivers and other workers who are displaced by self-driving technology?

What happened to many U.S. manufacturing workers who have lost their jobs? Many have found new jobs, but many also left the workforce, which accounts for the significant drop in the U.S. labor force participation rate over the past 20 years. Not all of the workers that will be displaced by the automation of driving will be able to find new jobs.

What will that mean for the U.S. economy?

Our current economic system requires people to either have wealth or to work to make a living, with the assumption that the economy creates jobs for all those who need them. If this assumption breaks down -- and progress in automation is likely to break it down, I believe -- then we need to rethink the very basic structure of our economic system.

For example, we may have to consider instituting Basic Income Guarantee, which means that all citizens or residents of a country regularly receive an unconditional sum of money, in addition to any income received from elsewhere.

Do you share concerns about the rise of artificial intelligence -- that intelligent machines will one day do us all in?

Elon Musk and others are worried about AI systems developing autonomy and agency. At this point, we are incredibly far from being able to build such systems, so these worries seem a bit theoretical to me. In 25 years it might make sense to talk about a possible threat, but now such talk is really fear-mongering. We simply do not have enough facts to think about such threats.

The threat to jobs, however, is imminent and deserves our immediate attention, while we continue to monitor for other emerging threats.

What about the development of military robots capable of mounting attacks without input from humans?

Many people now call for banning what's being called LAWS -- Lethal Autonomous Weapon Systems -- by an international treaty. The challenge is to define autonomy. What kind of human input is sufficient for "killer robots"? What about a robot that kills an enemy solider without human input in order to save our own soldiers? These issues need to be fully hashed out.

What in your view are the biggest misconceptions about autonomous systems and artificial intelligence?

PHOTO GALLERY
A Brief History Of Robot Butlers
Download
Calling all HuffPost superfans!
Sign up for membership to become a founding member and help shape HuffPost's next chapter
Join HuffPost 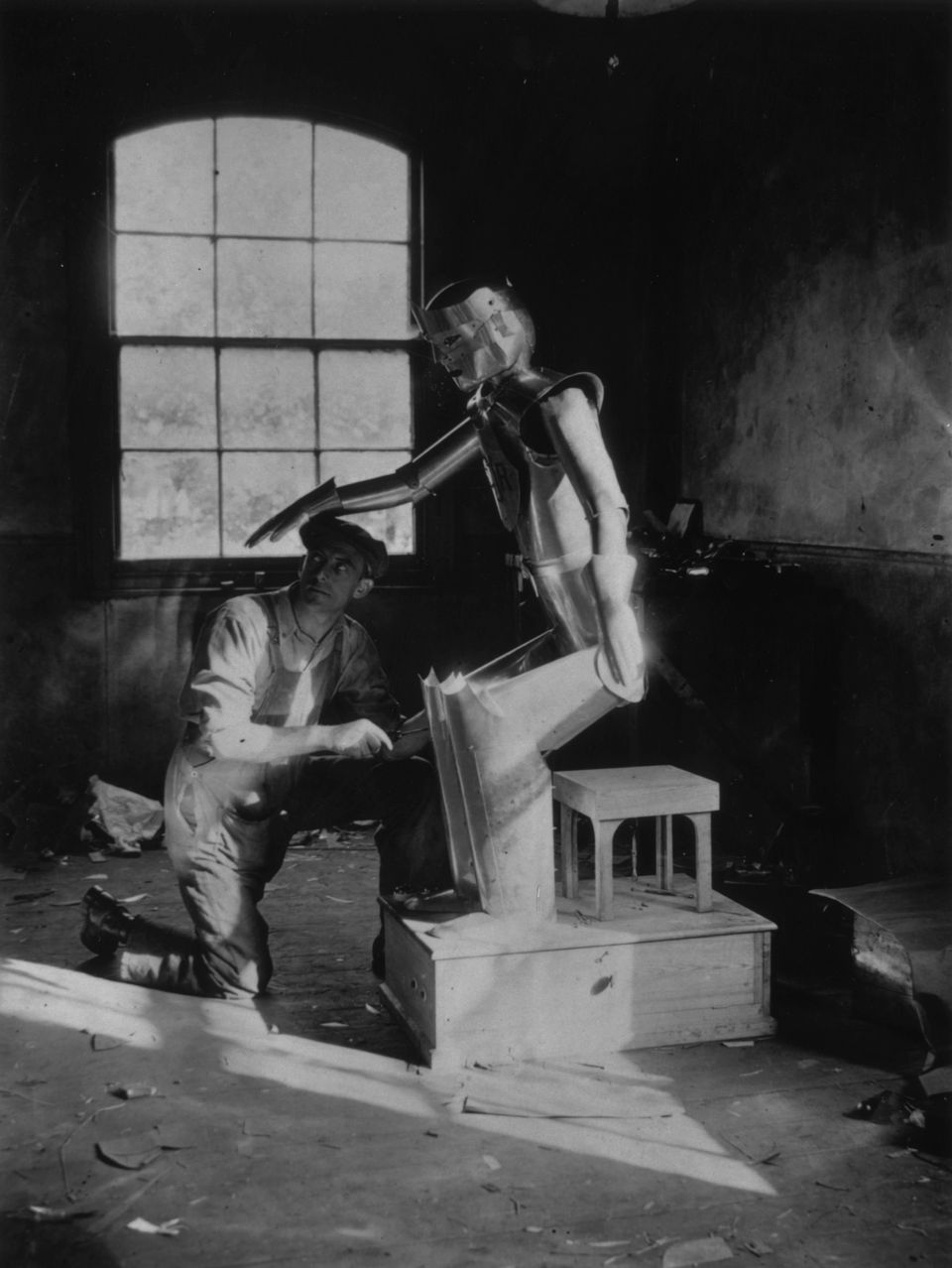 1 / 7
At first, they looked like the Tin Man from "The Wizard of Oz" ...
<i>Gomshall, United Kingdom -- September 1928<br><br></i>William H. Richards, an English veteran of WWI, and engineer&nbsp;Alan Herbert Reffell built a&nbsp;radio-controlled robot for the opening of the 1928&nbsp;Exhibition of the Society of Model Engineers in London. The homemade android&nbsp;was&nbsp;able to speak, tell time, shake hands and sit down when told. However,&nbsp;these&nbsp;abilities were limited: The robot's answers and movements had to be controlled via&nbsp;<a href="http://www.reffell.org.uk/people/ericrobot.php">remote wireless or voice commands.</a>
MacGregor/Getty Images