Having said that, by the time my freshman year of college rolled around the zits were gone, the boobs filled a small B-cup and the pubic head ebbed and flowed with the ever-evolving curling iron/hair gel technology. There was a light at the end of that spit-curl tunnel.

But then I fell in love with a man I'll refer to as the Greek God. When the three-month honeymoon period ended the C-word reared its ugly head.

We were sitting on my dorm bed. I was wearing shorts when he reached over, pinched my thigh and a few little dimples appeared.

At 18 years old I didn't know what cellulite was. I'd spent puberty and beyond pretty much skin-and-bones, just wishing I could put on a few pounds to fill out my Jordache jeans, so cellulite was, as yet, unknown to me.

I learned a great deal about cellulite from the Greek God.

1. It's disgusting and verges on sinful.

2. It's caused by laziness and lack of discipline.

3. It's unattractive and makes men not want to have sex with you.

4. You'll never be good enough until that cellulite is gone.

This is what I looked like with my cellulite: 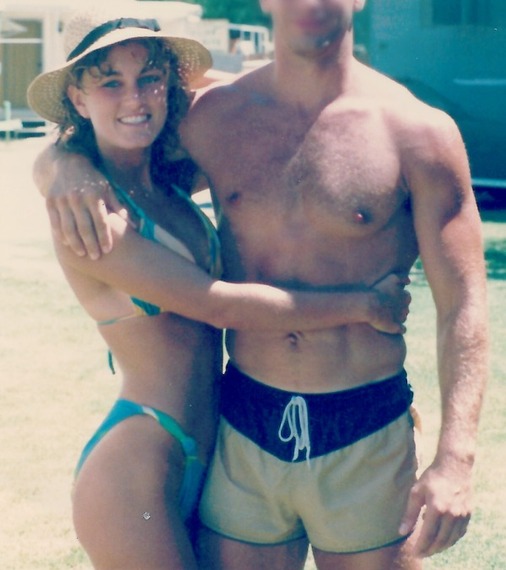 Because of my "cellulite" I hid that body as much as I could. I stopped wearing shorts and skirts and felt incredibly self-conscious when I had to wear a bathing suit.

But cellulite isn't the C-word I was referring to. The C-word that decimated my self-esteem was Criticism and the Greek God had plenty to offer.

My hair "looked like it'd just stepped out of the Gremlins movie" (which dates me, I know). My chin was as big as Dudley DooRight's chin. And my lady bits were too wild (I hadn't learned about trimming the terrain in my nether regions yet. Where was my gay friend Jose when I needed him?).

While sometimes these things were said in jest, mostly they were said to keep me in my place, which was submissive.

And it wasn't just the criticism of my body that stuck, it was the adjectives attributed to my personality that bothered me, too. Adjectives like needy, clingy, neurotic, suffocating and insecure. (These may have been true, given his infidelities).

The thing is, I'd never worn any of these adjectives prior to this relationship. After the Triumvirate of Terror I'd left high school having been senior class president and worked hard enough to earn eight college credits on the Advanced Placement exams.

I thought I was The Shit. Until he made me feel like shit.

In making me feel smaller and smaller The Greek God ensured that I'd never leave, because I believed, considering all of my many flaws, that I was lucky to get him and should just put up with the times he treated me poorly.

It's still hard for me not to cut The Greek God some slack. I know all of the reasons he behaved like an Asshat and it's possible, 27 years later, that he's grown up, just as I have.

But I found, at the time, that it was important to really be steely-eyed and unforgiving toward the Greek God if I ever expected to move on.

I couldn't indulge my natural propensity for empathy and understanding while I was still enmeshed. I could only allow generosity-of-spirit and forgiveness to seep in once I was finally and irrevocably through with him.

I was able to finally walk away when I discovered a passion for acting and performing. I was so full of excitement and new discovery for this craft that there was no longer room for someone who wanted to keep me small.

It seems the antidote to Criticism is Passion. Just not for the critic.

To keep in touch with Shannon you can opt-in to her 2 x month Asshat Recovery Newsletter HERE.