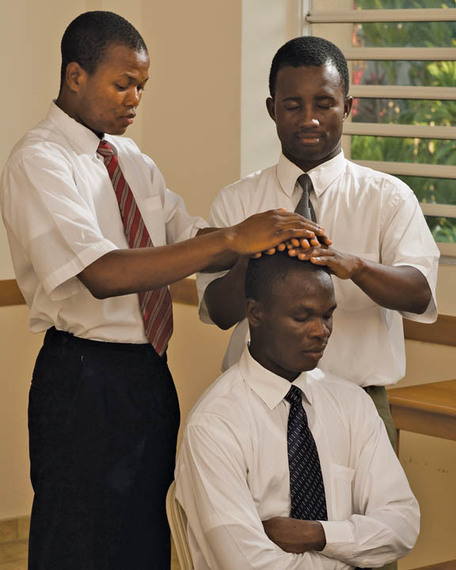 On December 6, 2013, the Mormon Church made yet another historical landmark by disavowing the racist theories that were used to justify prohibiting Blacks from full church participation through a ban in effect until 1978. Though done surreptitiously on its website, the Church released the "Race and the Priesthood" declaration and finally addressed the reality of racism that it long denied. Over seven generations of white Latter-day Saints have been taught some version of the negative white racial frame about black people as spiritually unworthy. Such earlier statements affirmed that Blacks were destined to be the "servant of servants" in bondage to European Americans until God saw fit to remove an alleged "curse" of blackness upon them. A similar version of this belief existed in Europe and after making its way across the Atlantic Ocean; the folklore circulated throughout European-colonial America and into contemporary white mainstream Christianity. Just as the United States, through the Federal Constitution as originally written, considered black Africans as 3/5th of a human being and treated them as such, Mormons saw black skin as an irreducible sign of God's disfavor and, thus, banned them and others with mixed-African ancestry from full participation in the Church. Racist writings by church authorities once blamed black suffering on God, scapegoating Him for modern racism in the Mormon faith. And for decades, written and spoken statements by prominent church authorities spoke openly of black inferiority; many such individuals considered to be God's chosen spokesmen.

These racist ideas presented the LDS Church in a negative light and in turn triggered prolific protests during the late 1960s, including the widely known uprising of "The Black 14" at the University of Wyoming and their attempt to protest against BYU for the racist exclusion and marginalization of black people in the LDS Church. In a gross miscarriage of justice, these 14 black young men were discharged from their team, losing scholarships in defense of justice. Throughout the controversy, the LDS Church maintained its position that Blacks could not hold the priesthood, justifying such practices using race-based folklore. Concurrently Mormon blacks continued to suffer second-class status until Spencer W. Kimball lifted the ban on Blacks in 1978.

Despite this change, the LDS Church chose not to refute its long-standing, prevailing racist folklore that blacks were descended from a long line of biblical counter figures beginning with the world's first murderer, Cain. Black members in the LDS Church would learn to repress, whether it be by ignoring or internalizing, the racist message of Blacks-as-less than valiant and unworthy of the Mormon priesthood. And like their white counterparts, these same black Mormons would come to believe that perhaps they were "not ready" and "not worthy" for such responsibility, as taught by the majority of church leaders for a century and a half. But black members would feel the results of such racist rhetoric. These black Mormons, who unquestioningly accepted the racist explanation for their place in their faith, would openly expose a disturbing type of religiously based form of self-hatred that manifests when history is ignored over imperfect religious practices by humans.

Though Blacks have been permitted full participation since 1978, the justification for the prior restrictions has allowed continued racist teachings by lay members to circulate from generation to generation. The bigoted attacks on the temporal and spiritual destiny of black people in Mormonism were vicious and patronizing. In the latest release, the LDS Church has declared, "None of these explanations is accepted today as the official doctrine of the Church." The long-awaited explanation provides a historical accounting of the circumstances and conditions, which lead to the priesthood ban on black men, and it places the origins of black priesthood denial blame squarely on Brigham Young -- second Mormon Church president, who first declared it as an essential practice in 1852, thereby making it church canon.

Unfortunately, the LDS Church continues to have limited appeal among North American Blacks given its historical record of exclusion, and most recently, its public racist gaffes by certain of its lay members, most prominently one-time BYU Religion Professor Randy Bott. Since the 1978 lifting of the priesthood ban, the appeal of Mormonism has been largely limited to those blacks living outside of the United States, most especially Africa and Latin America. The latest LDS Church statement will possibly go a long way in opening a door of communication and understanding for black Americans. To make stronger headway here, a public and heartfelt apology for the many decades of racist propaganda that the Church wantonly allowed to transpire is merited. The principle of recompense is taught as a basic Christian principle by American Christian churches on any given Sunday. Disavowing prior anti-Black racist theories would go far in righting past wrongs. In essence, the LDS Church would be well-served by issuing an apology and atone for its part in the maintenance of systemic white racism. Then, all members can seek to do better and right by those it offended.

Dr. Darron Smith, an African-American Latter-day Saint and co-editor of Black and Mormon, published in 2004 by University of Illinois Press, is an assistant professor in the Department of Physician Assistant Studies at the University of Tennessee Health Science Center. Follow him on twitter @drdarronsmith.