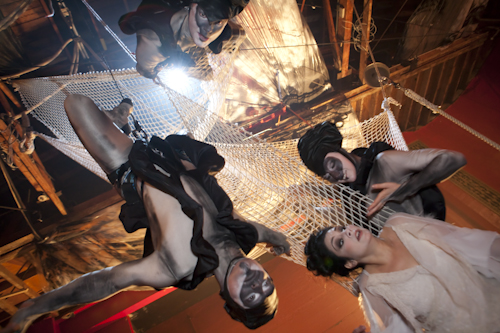 The Mortal Thoughts of Lady Macbeth, a chamber opera by Canadian composer and USC Thornton Music professor Veronika Krausas, with a libretto by Thomas Pettit (after Shakespeare's play), received its Los Angeles premiere on Thursday night in a staging at the Fais Do-Do, a club on West Adams Boulevard.

Shakespeare's Macbeth has the reputation of a problematic, even unlucky play, but its fantastical elements, a bewitching tug of war between outsized ambitions and abnormal genders, give it terrific potential for operatic treatment. Verdi's early opera has enjoyed recent revivals and works on the subject since then are plentiful.

Krausas' take on the story premiered in concert version two years ago at the New York City Opera's VOX Festival and was performed again last year in San Francisco, winning awards at both, but the theatrical production this evening was its first.

Entering the Fais Do-Do club venue was half the fun. It's a dark relic of a space, atmosphered Thursday evening in murky stage-mist, the middle of its floor weirdly disarranged with a collection of sinister objects. Cobwebby riggings hung overhead. Perimeter booths hugged the walls with cocktail tables near the central set pieces.

Immediately after came the curious production of Mortal Thoughts, with the sound of opera and a look of cabaret spectacle. Viewers at the tables closest to the central staging were soon twisting heads as the action unfolded all around them. Think of it as a thirty-minute Roger Corman horror film in 3-D live action.

Distilled from the original play is Lady Macbeth's mental trajectory from initial power-lust and murderous urgings to the guilt-ridden pangs that hound her soul and disintegrate her personality. The grisly trip was engrossing in director Yuval Sharon's spooky-campy staging. (He just last month assisted Achim Freyer in the direction of LA Opera's Ring Cycle.)

Reprising her award-winning role from San Francisco, Michelle Jasso was a rich-toned Lady Macbeth when singing, but not always clear when speaking, the orchestra's churnings tending to overbalance her. The three witch prophesies were delivered by speaking and singing sopranos Carmina Escobar, Alexandra Loutsion, and Kalean Ung, draped in ghostly white gauze as they emerged from canisters. The four sopranos together produced a decidedly plummy coloration.

Marcus Herse and Matt Hooper Pennington's production design was Gothic and attic-relic cluttered, with floating objects everywhere - a knife, the severed head of King Duncan, and dangling baggage. Particularly gruesome were the umbilical cord ripped from Lady Macbeth's body ("unsex me here...") and the silken web strands that emerged from her fingertips. Supporting lighting effects were by Ryan Bona.

Choreographer Bianca Sapetto, with experience as both a Cirque du Soleil aerialist and an Olympic gold-medaler, ensured a silky-smooth execution of the evening's fated queen. Three Weavers - silent, spider-like aerialists performed by Sapetto herself, Karl Baumann, and Gregg Curtis - slither down from regions above, and slowly smother Lady Macbeth in her own web. Thus tangled below, she is soon dangled above.

Marc Lowenstein was an alert leader of the Los Angeles-based Ensemble Green, configured on Thursday with strings, percussion, and the double-reed woodwinds. Krausas' music pushed no boundaries in technical innovation, but evoked well the fantastical elements of the play. Irregular canonic imitations in both spoken and vocal lines gave the witches initial shuddering presence. Eerie string effects, ominous meditation bells, off-balance meters, triplet snarls for the floating dagger, and odd intervallic leaps in instrumental and vocal lines kept the audience tingling. The employment of the ethereal oboe and English horn worked better for me in this version than the open-throated clarinet I heard employed in the recording of the work's New York premiere from 2008.

In formal structure, Mortal Thoughts blends two rich but infrequently employed musical traditions: the chamber operas of Benjamin Britten and his musical descendants (characterized by the use of small orchestral forces) and the experimental, edgy opera monodramas of composers like Schoenberg, (Erwartung, Die glückliche Hand) and Poulenc (La voix humaine).

The evening's slant toward high-class entertainment over traditional proscenium-projected opera seemed in step with the leaner formats of the above composers, whose experiments emerged, like this production, in times after war when resources were lean. Not incidentally, eminent English composer and now LA resident Thomas Adès, who has written a few chamber operas himself, was in attendance on opening night.

Writing a work in such distinguished company, past and present, as those above could well have inspired Veronika Krausas to muse, "That which hath made them drunk hath made me bold."