The United States has been competing in the modern Olympic Games since they began in 1896, and doing well. We win the most gold medals in the summer games, and we usually stand second in winter contests. The Olympic Games rankings are important measures of status for competing countries, rallying citizens to support their athletes to excel, beat previous world records, make their countrymen and women proud. Books about the intense challenges of competing and winning in the Olympics are best-sellers.

Being an Olympic sport requires an international sanctioning body. What would it take to have a new event, paralleling the sports Olympics, that ranks countries according to their accomplishments in producing healthy citizens?

The World Health Organization would be an appropriate sanctioning body. Given today's collection of annual births and deaths, a whole range of comparisons could be developed: the longest-lived overall; longevity for subgroups; death rates in young children; deaths to women from pregnancy-related causes. Let's call these the Mortality Games, or the Health Olympics. 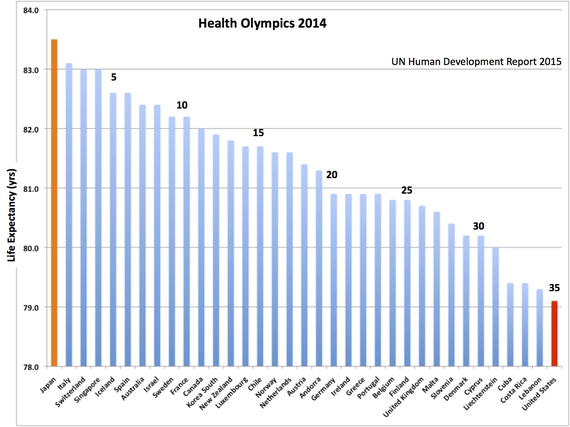 How would the U.S. do in such events? In a word, badly. We would be eliminated in the trials, unable to even qualify for the final day's competition in any contest. In life expectancy, we stand 35th in the world. Another 44 nations have lower child death rates, and for deaths of women in childbirth we stand 46th. For adult mortality, in 62 other nations a 15-year-old girl has a smaller chance of dying by age 60 than in the US. Even Sri Lanka beats us in that event -- a humiliating result. For boys, 52 nations do better.

If we had Iceland's child death rates, something that surely is achievable, 49 fewer children would die every day in this country. While we get justifiably upset with the recent tragic shootings in the U.S., those deaths amount to less than one day's child mortality here. These unnecessary deaths happen in the richest, most powerful country in world history, which spends close to half of all health care outlays worldwide.

Scores for most Olympic sports events have seen progress over the decades, with shorter times and better outcomes. Mortality is also generally improving over time, but in the maternal mortality Olympics, eight nations have seen worsening scores in the last 15 years. The U.S. ranks among them, along with Afghanistan, Guinea-Bissau and South Sudan, a tragic and humbling reality.

If we rewind some 65 years, the U.S. would have won the gold for low maternal death rates. We had cause then to be proud of our performance in the other health events.
In 1952 we would have won the most medals, and could have proclaimed that we were one of the healthiest nations on the planet. Since then, although our times and rates have improved, they've improved considerably faster in other countries, so we have fallen behind.

In only one event would we win the gold medal today without question -- the amount of money spent on health care, over 17% of our huge economy. No one can touch us there.

How should we interpret our performance in the Mortality Games? The U.S. Institute of Medicine issued a document in 2013 entitled U.S. Health in International Perspective: Shorter Lives Poorer Health. This groundbreaking report pointed out that we were dead first among rich nations, and highlighted that our medical care system was not the reason. Two factors they pointed to as likely causes were our wicked levels of economic inequality and the lack of attention to early life.

But the beginnings of life and growth are also where health begins. Early life, the first 1,000 days after conception, is when chronic diseases such as hypertension, cardiovascular disease and diabetes are programmed, and it is estimated that roughly half of our health as adults is determined during that period. Careful attention and care to infants by their parents in those first months of their existence has dramatic effects on their future health. Mothers in particular need to be with those infants for as much time as possible during their early months. Yet most mothers are employed, and need compensation for their time away from work. We are one of two countries world-wide that do not have a federally mandated paid parental leave policy, making us tied for the gold medal in that shameful event.

How should we train for the Health Olympics in future generations? It took us over sixty years to go from being one of the world's healthiest nations to today's dismal showing. There is no quick fix. No trainer or regimen can get us to win in 2020, but we can begin to get back in shape. The gross levels of current inequality are not inevitable; they can be changed with reasonable and fair economic policies. Because good health starts early in life, we as a nation must also establish greater support to parents for raising healthy children. That will take time and money, but if we are committed to getting back into the Games, we could start by making small changes in taxation of the wealth of the top 1% -- and in a generation or two we could become proud medalists again. The training is political and our health, yours and mine, will be the outcome.