Call it a race war, class war, social war or just a war launched against anyone with a look or belief system different than your own. No matter the nomenclature, it is impossible for any American to deny the terrifying state of our broken society.

I remember learning about Dr. Martin Luther King, Jr. in elementary school. I remember how the images I saw of water fountains assigned to only whites confused me as the water fountains in our school were for anyone that was thirsty.

Years later, after more in depth lessons taught me not only of segregation but of the numerous souls killed merely for the color of their skin, I was so thankful that my own children would be born into a colorblind world. I too believed in Dr. King's dream, and considered it a dream fulfilled. Until recently.

Earlier this month I listened to an interview with a city official presiding not far from where the Sandra Bland incident took place. How shocked I was to learn many funeral homes in that community are still segregated. The idea that a business intended to respectfully and compassionately deal with death could turn a body (and soul) away based upon the color of it's skin made my stomach turn.

Instantly, I thought of my two children.

As the daughters of a woman obsessed with pop culture, I wondered how (or even if) my girls comprehend the constant news and water-cooler talk around them. Between our home televisions, car stereos, multiple tablets, cell phones and even those little monitors now popping up on gas station pumps, the news is impossible to escape. Then while driving through Los Angeles my eldest, age 7, had the most fascinating response to an Ant-Man billboard. "It's time for a superhero that turns from a man into a woman," she said.

There is certainly a chance that her timing was merely coincidence, that the media's saturation of yet another timely news story like Caitlyn Jenner's had nothing to do with her statement. But I so wanted to believe otherwise.

Last week while on family vacation we visited a New England splash pad packed with young kids looking to beat the heat, one of which was in a wheelchair. Of the many potential playmates in the park that day, the same 7-year-old who'd reacted so profoundly to the Ant-Man billboard chose to play almost exclusively with the girl in the wheelchair. 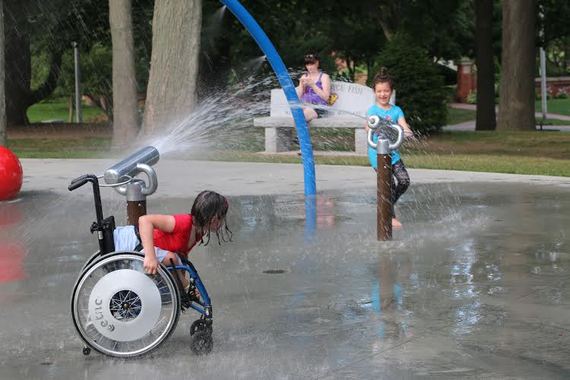 As the park radiated with laughter and cheer, much of which came from this duo, it was clear my daughter chose her new friend not because she felt badly for her, but because she was fun. I saw a big difference between the two girls. My daughter did not.

Instead of crying over the resurgence of discrimination in our country, I am choosing to focus on (and hopefully spread) the just-as-present resurgence of acceptance and compassion.

It may be naïve for me to believe that for every person spreading hate in our world, there is another spreading love. But, my young daughter gives me that hope.

For if my soon-to-be second grader has learned to look right through a person's exterior, to see straight to their soul -- you can too.

Just maybe, by my sharing her story, she's helped to teach you how.

Voting Made Easy
Register to vote and apply for an absentee ballot today
Register now
More:
parenting advicehandicapParenting caitlyn jennerParents
Newsletter Sign Up
Raise the kind of person you'd like to know
Subscribe to our parenting newsletter.
Successfully Subscribed!
Realness delivered to your inbox