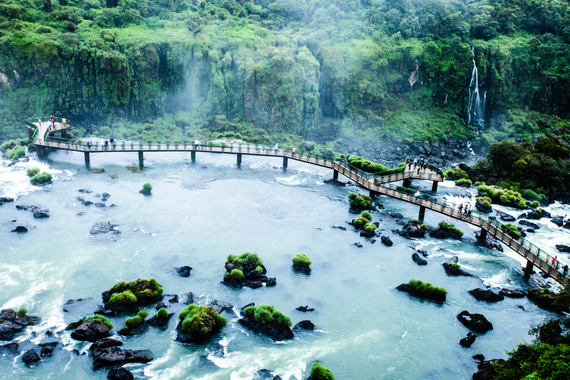 Anyone who's watched more than two episodes of The Twilight Zone -- or read the angry comments when we named the most beautiful place in every state -- knows that beauty is truly in the eye of the beholder. Undaunted, we proceeded to tell you about all the beautiful places you didn't know existed in California and New York and even in Nevada, because believe it or not, there actually is beauty there outside of a strip club.

But enough about America, there's a whole big world out there; and it's full of stunning scenery that you've probably never laid eyes on -- until now. Here are 20 of the most spectacular places on the planet. 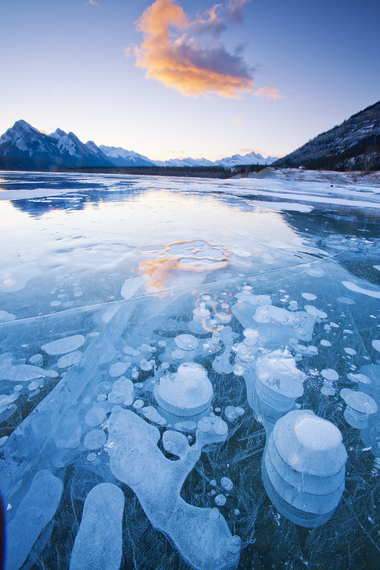 Abraham Lake
Alberta, Canada
Ever wonder what happens when freezing water traps methane bubbles created by bacteria feeding off dead matter on the sea bottom? Welcome to Abraham Lake. Here, those bubbles of methane (undetectable in your standard, non-frozen lake) create pockets that resemble millions of orbs trapped in the ice. Just don't light up while you're snowmobiling; if the ice cracks and those bubbles burst, methane is highly flammable. 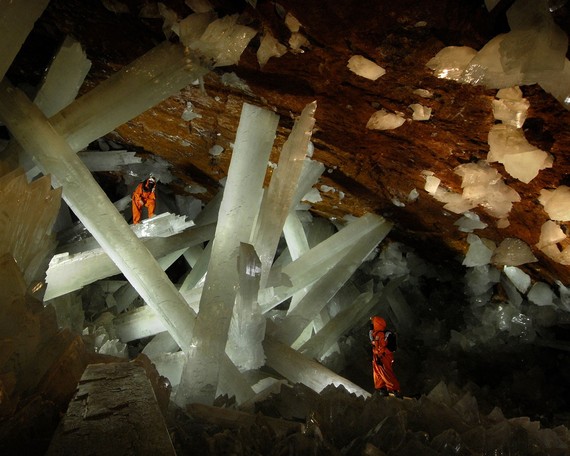 Cueva de los Cristales
Chihuahua, Mexico
Don't feel bad for not knowing about this "Cave of Crystals" -- until 2000, nobody had heard of it. That year, two brothers mining for silver drilled here and accidentally uncovered an epic cavern filled with translucent, 30ft crystals, some of which are nearly half-a-million years old. If you can stomach a 20-minute van ride through a mine shaft, you'll be greeted by triple-digit temperatures and 90% humidity thanks to the magma field that flows a mile under your feet. 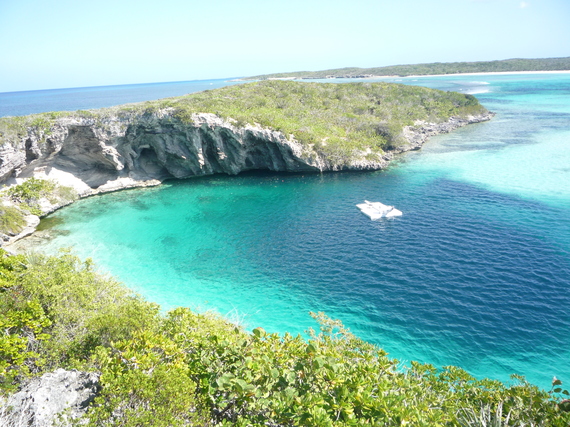 Dean's Blue Hole
Long Island, Bahamas
There are some spectacular beaches in the Caribbean. And some other-world crazy cenotes in Mexico. Dean's Blue Hole combines the two -- albeit underwater -- and is the largest blue hole in world. Although honestly, the white sand beach and limestone walls that surround the hole could make this list as well, they're equally as stunning. That said, descend past the initial 60ft bottleneck and Dean's Blue Hole opens into one of the largest underwater cenotes in the world, complete with turquoise water, seahorses, and tropical fish (it's a hotspot for tarpon and snapper). Clear visibility and no current make it a place as scenic below the surface as above. 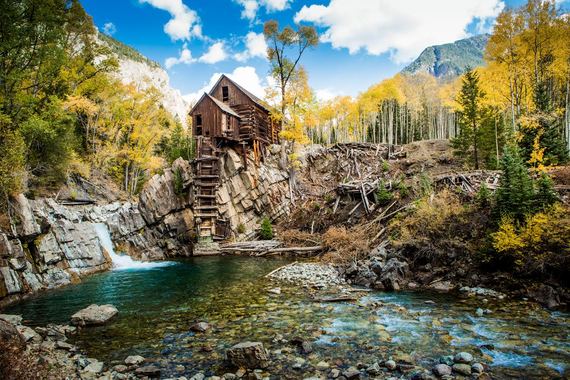 Crystal Mill
Marble, CO
OK, OK, so we couldn't resist throwing at least one US spot on the list. About an hour outside of Aspen, and an eight-hour hike from the nearest road, there's a ghost town at the base of the Rocky Mountains. And the lone remnant of that ghost town is this old mill. If you visit in the fall, the combination of golden leaves, blue sky, and white snowcapped peaks might be the most unexpectedly beautiful vista in the American West. 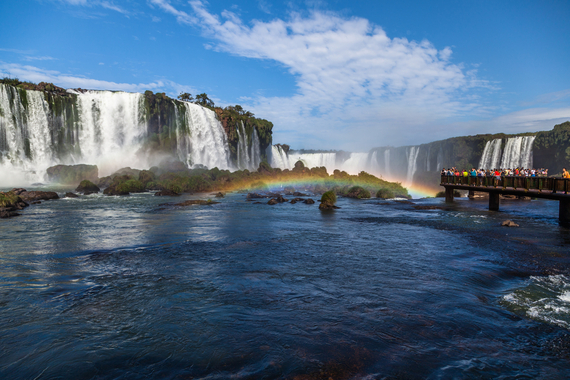 Iguazu Falls
Misiones Province, Argentina
Iguazu Falls aren't that obscure, but they're probably just another one on your mental list of big waterfalls to visit some day, up there with Niagara and Victoria. Which sells them WAY short. This isn't so much a waterfall but a venerable city of waterfalls -- 250 of them stretching nearly two miles -- that dumps 53,000 cubic feet of water PER SECOND. Throw in the fact that they're located in a gorgeous South American rainforest, and you've pretty much got one of the most impressive feats of nature on the planet. 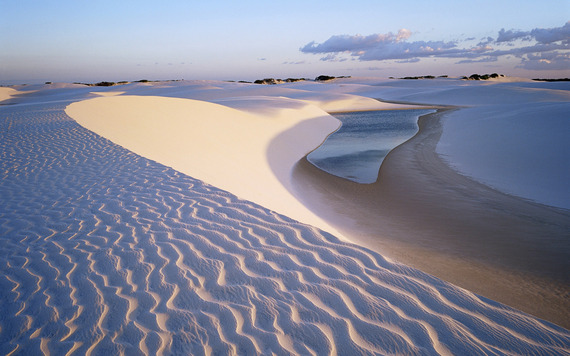 Lençóis Maranhenses
Maranhao, Brazil
The name literally means "bedsheets of Maranhao," the state in Northeastern Brazil where these coastal dunes sway over 600 square miles of shoreline. The dunes are formed when the Parnaíba and Preguiças Rivers bring sand from the country's interior to the ocean, and then the ocean currents -- aided by northeasterly winds that blow inland -- send that sand back to the shore. Though the area might look like a desert, temporary lagoons spring up in between the dunes during rainy season and often double as exceptional fishing holes. 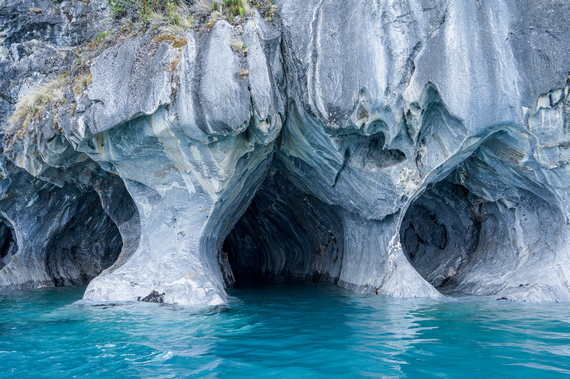 Cavernas de Marmol (Marble Cathedral)
Lake General Carrera, Chile
What happens when you take a Patagonian peninsula made completely of marble and surround it with a massive glacial lake? Weird, swirling marble caves that change color, that's what! These only-accessible-by-boat caves near the Chile-Argentina border reflect the color of the water that flows through them, shining turquoise in the spring and deep blue in the summer. The reflections also change the appearance of the patterns in the marble; meaning, if you visit the caves at different times of year you'll have a completely different experience. Then again, after the 1,000-mile drive from Santiago and lengthy boat ride, once might be enough. 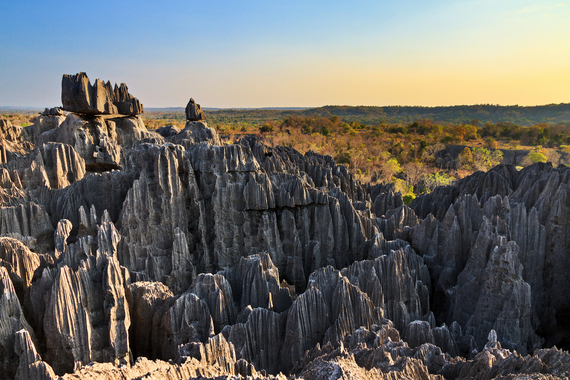 Forest of Knives (Tsingy Forest)
Madagascar
The name might sound like the setting for Halloween 12: Michael Does Madagascar but the surreal beauty of this limestone forest is anything but horror-inducing. Quite the opposite. Here, slabs of rock stab upward 200ft in the air, mixing with trees to create a literal forest made of leaves and jagged peaks. Climbing here is the main attraction but be warned, it can be dangerous: slip and you could find yourself with a Ginsu-like gash. 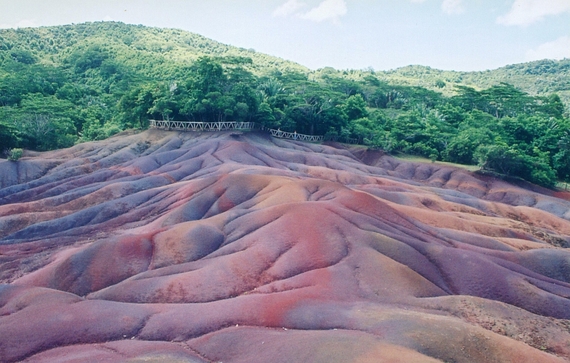 Seven-Coloured Earth of Chamarel
Chamarel, Mauritius
One of the problems with rainbows, other than the fact that there's never a pot of gold at the end of them, is that as soon as you try to Instagram one... POOF!... it's gone. If only rainbows were made out of sand that could withstand thousands of years of rain and erosion. Well, guess what rainbow lovers, meet the Seven-Coloured Earth of Chamarel! These rainbow dunes in Mauritius are formed by sand of seven distinct colors -- red, brown, violet, green, blue, purple, and yellow. Even cooler: pick the sand up, put it in a bottle, mix it up -- eventually it'll resettle into the same seven distinct layers. Every time. 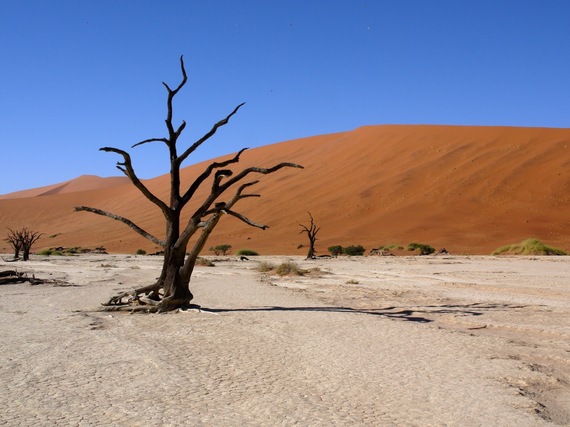 Deadvlei
Hardap, Namibia
It's hard to believe when standing under an oppressive sun in the middle of 1,300ft-tall sand dunes that this valley was once a lush forest fed by the Tsauchab River. That, of course, was 900 years ago. Since then, the area has become so parched that the remaining trees didn't even have enough water to decompose, and now sit as charred relics. Add rusted sand and a deep-blue sky, and this is one of the most colorfully desolate places on the planet.

To find out what beautiful places you should definitely see in Europe, Asia, Australia, and Antarctica, get the full story at Thrillist.com!

The Best Tourist Attraction In Every State