This is an open letter of deep appreciation to you. I hope that somehow it finds its way to your computer screen.

You are an actor, and a damn funny one to boot. You're really skilled at working with the unpredictability of kids and turning it into entertainment. I really hope that when you auditioned for and won this gig, that you've been as pleased with your job as your audiences have been with your performance. I also hope that this leads to bigger and better things, if that's what you choose. You're a supremely decent man and I'm forever in your debt for how you helped me out Tuesday, June 4, 2013 at the end of the last show of the day.

You see, during the months of planning for our Disney World trip, I found out about the Jedi Training Academy in Hollywood Studios and knew that my little boy would LOVE participating in it. He has been diagnosed with autism, and is typically oblivious to what goes on around him --except for Star Wars. I found an online clip of the Jedi Academy that some parent uploaded and showed him. He was so excited!

"I want to do that! I want to fight Darth Vader!"

He so very seldom really communicates with us that when he does, I move heaven and earth to keep that connection going. He wanted to fight Darth Vader, huh? Then by God, he would.

When we arrived at Hollywood Studios at the ribbon drop, I high-tailed it to sign up for the Jedi Training. There was already a huge line, and I was a little worried that all the spots would fill up before we reached the front of it. I was also concerned because the workers at the front were asking the KIDS questions to ascertain if they can follow instructions. I squatted down and had a little pep talk with my boy.

"Josiah, look at me, please. Look at me. Good. Listen to me. Are your ears on? Good. That lady is going to ask you how old you are. Do you know how old you are? 8! That's right! Now, you HAVE talk to her, OK? I mean it, sweetie. When she talks to you, you talk back, or she won't let you fight Darth Vader."

He never gave any sign of recognition, but I hoped that he understood. We've been working on appropriate conversation skills for months now, and I was counting on that therapy to kick in high gear for him in this moment.

Oh my God! He talked to her!

"Good! We need brave Jedis like you. How old are you?"

Josiah hesitated. She asked him again. I was about to answer for him when he said, "I 8."

Josiah blinked at her.

"If I told you to raise your hands, what would you... Good!"

Josiah had risen his hands up high before she finished her question.

Because of this miracle of a "conversation," we were able to secure two spots for both of our kids in the 8:00 show. (Our daughter decided she wanted to be a Jedi too.) Perfect! This is going to be something they'll remember their entire life!

After signing up, we went about our sight-seeing of the park, riding Star Tours three times in the process. Before and after each ride or attraction, my son asked, "Am I going to fight Darth Vader now?"

"Oh. That's right." He'd sigh. Then we'd have the same conversation again in about 20 minutes.

The day went on, and a storm blew through. I was glad that our Jedi training was after the big storm. Yay for us, right?

Accordingly, after we ate supper at Hollywood and Vine, I took both of my Padawans by the hand, and led them to Jedi training to suit up in their robes.

"Now? Is it time to fight Darth Vader now?" He anxiously asked.

They led the kids to the stage and there we saw you, Mr. Jedi-man. You were funny, entertaining and great with the kids.

Then, Darth Vader made a wonderfully dramatic entrance!

I looked at Josiah's face, which was plastered with the biggest grin I'd ever seen.

My face was too.

The assisting Jedi sent kid after kid to center stage to battle the Sith Lord. My daughter, Esther, was so cute! She stood so far away from him to "fight." I laughed and enjoyed watching her.

This is so cute!

"We're sorry ladies and gentlemen. Due to the rain, the Jedi academy is closed."

Josiah stood there onstage; lightsaber at the ready. He turned and locked his eyes on mine. Then he screwed his face up and cried.

He ran to me and I held him while he cried.

I'm sure most people would, on observing this, assume he is spoiled. I assure you he isn't.

This is autism. He was fixated on something, then didn't get to do it. The vacation would be ruined for him -- and we were only in day two of it. Nothing we do can ever get him back on track once he derails. I began to cry despite myself. This would be all he would remember of his Disney trip.

I locked eyes with you. Do you remember? I was crying like a blubbering dummy.

I motioned for you to come to me. You stood there and looked around for a second. I motioned again. You took a hesitant step my way... then another. We stood face-to-face in the pouring rain.

"He's autistic." I choked out. "This is all he's talked about all day. Is there anything you can do?"

"Meet me around the side there," you nobly said. (Kudos to staying in character the entire time, by the way.)

We made our way around to the side of the stage, amid a sea of parents, kids and cheery cast members.

There you were, waiting all Jedi-like in an alcove. Waiting for Josiah.

You then made a "grand presentation" to him and gave him Darth Vader's lightsaber ---autographed by the Dark Lord himself!

Josiah was in awe. You gave him the moon, Mr. Jedi Master. You fixed his day... his entire vacation! You got him back on track.

I couldn't help but cry, and I'm crying now remembering your generosity of spirit for my little boy. You easily could have thrown your hands up when I motioned for you. You could have pointed to your character handler and shrugged a fake, "I'm sorry." You could have simply ignored me and turned your back.

You may not even remember this moment, it was so small for you. I would be remiss, though, if I didn't fully explain how you ... YOU, Jedi Master, made a ruined moment beautiful. Thank you from the very bottom of my heart.

We spent the rest of the night jumping in puddles, riding rides, enjoying the nearly empty streets of Hollywood Studios and watching Fantasmic.

Thank you, again. You will never know how you helped us out. To say that you made our vacation is not an exaggeration. 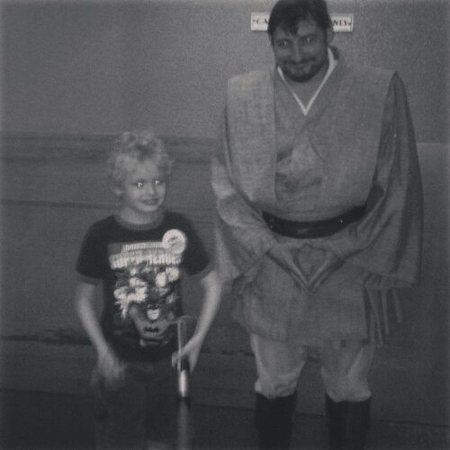 Most Sincerely and Appreciatively,

Facts About Autism
More:
Parentsautistic-childfamily vacationAutismparents-autism
Newsletter Sign Up
Raise the kind of person you'd like to know
Subscribe to our parenting newsletter.
Successfully Subscribed!
Realness delivered to your inbox