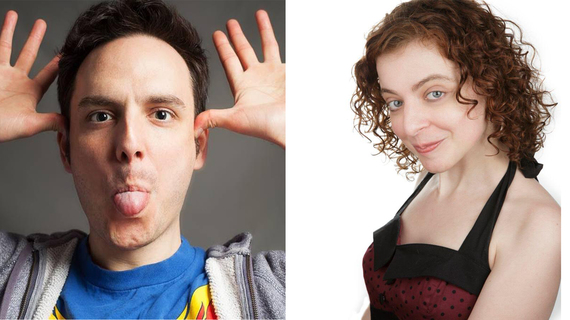 Up the winding steps of an old warehouse in Brooklyn is Standard Toykraft, a small venue with a stage and six short pews. Couples squeeze into them as the lights dim for the one-year anniversary of the Relationshit show, a live storytelling event where comedians and performers tell stories, and one of them is then analyzed by an actual psychologist on stage.

"I wanted to do something that could help people the way that stand-up and storytelling has been so cathartic for me," says Lynn Bixenspan, one of the comedians behind Relationshit. "It helps you try to make sense of fucked up stuff that has happened in your life. I thought it would be really interesting to combine it with therapy."

"At around the time we started storytelling, we were both going through really bad break-ups," Pielli says of him and Bixenspan, "and we bonded over that. That's another reason I was so excited to do Relationshit."

A big misconception about the show, Bixenspan explains, is that it's only about dating and romantic relationships. "It's about all kinds of relationships," she says. "As long as it's something you can talk about that's really impacted you."

At the anniversary show, comedian Kendra Cunningham tells a hilarious story about how she found out her estranged father died during a party she and her sister were throwing. "He always liked to ruin a good time," she says to an audience that is unsure if they should laugh or not. Storyteller Elna Baker talks about the first time she awkwardly touched a penis after severing her relationship with the Mormon Church at 27 years old.

"Storytelling is a lot about exploring the darker aspects of various relationships," Pielli says. "When I moved to New York, I was struggling with the loss of my mother, and a lot of my stories are about my relationship with her."

The catharsis at the Relationshit show is evident. Not just for the storytellers on stage, but for the tentative audience, not sure if it's okay to laugh at something so painful. But the truth is, it's not only okay, it's imperative. "Having a sense of humor is one of the things that can really keep you sane and give you a sense of perspective," Bixenspan says.

The final comedian of the night, Brooke Arnold, tells a story about being raised in the Advanced Training Institute, a fundamentalist Christian organization, and once being "exorcised" by her parents after being locked in a bathroom without food or water for days. Afterwards, when she sits down with clinical psychologist Wilson McDermut, he asks her how she's managed to move on from something like that and be the well-adjusted, happy person she is now. "I've been able to laugh at it," she says simply.

That's what everyone on stage that night had been able to do, laugh at their pain in order to move on from it.

"I don't realistically think we're going to transform somebody's life in half an hour," Bixenspan says, "but if it's something that makes somebody feel good to share and they inspire somebody in the audience, then I feel like that's worthwhile."