After people hear I've been traveling for over seven years now, I always get asked to rate countries. What was your favorite? What was your least favorite? Who has the best food? Who had the hottest men? The questions are endless. I certainly haven't been to every country in the world so this isn't a scientific statement -- but I will confidently say India has the craziest, most chaotic driving culture.

After driving a motorbike around Vietnam, I used to think Vietnam held that honor, but after actually driving a rickshaw across India for 2,300 miles I have determined that India takes the award. I am pretty sure that the word clusterf*!#ck was created in India by some Westerner riding in a taxi around Delhi. Traffic in India is like a functioning anarchy -- I have no idea how it works, but it does.

If it has a wheel, then it can be driven on the streets. Bikes, scooters, tractors, wagons, wheel barrels, and rickshaws are all road-worthy vehicles and can surprisingly move masses of people. And there appears to be no rules around the age at which someone can drive. In fact some of the truck drivers looked to be young teenagers, as if the trucks weren't scary enough. 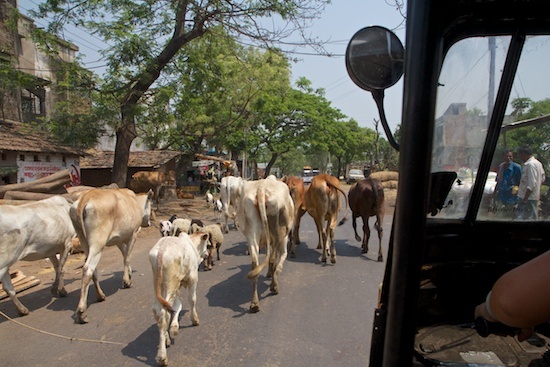 Take all of your driving rules that you've grown up with and forget them because India is no place for rules. However, after spending two weeks in the drivers seat in India, I did notice a few trends I could begin to rely on.

The horn is the most important equipment on a car or vehicle. I decided in order to pass your driving test in India, no eye test is necessary; however, a hearing test is mandatory. With a good horn you don't need blinkers or mirrors -- you do not even need an engine! A horn can act as both mirror and blinker. It is not the driver's responsibility to check their mirror and put on a blinker before changing lanes, it is the person/vehicle that flanks them who is responsible to honk their horn to announce their presence. If you don't announce your presence -- then prepare to be cut off or hit.

On most vehicles the side mirrors were removed because they take up too much width in the narrow lanes of traffic (see lanes below). Most large vehicles have painted instructions on the back in cutesy little colorful letters "Honk Please" of "Blow Horn" reminding people to use their horn and nicely relieving the truck driver of any responsibility other than driving straight ahead. Occasionally for fun the truck driver would blow his loud horn while passing you, but normally he would wait until he was right next to you making you jump out of your seat in shock and causing temporary hearing loss.

There's an important formula when it comes to lanes in India, if there are lines painted on the road that make up three lanes, that means that there is room for five lanes of traffic. This means you are left with about one inch of space between cars side by side speeding down the road. The equation is simple, you double the amount of lanes that are painted on the road (including the shoulder of course), and then subtract one. Granted, some of this depends on if there are bikes, auto rickshaws, or cars -- but on average -- this equation is correct. There is no such thing as personal space in India, not even on the road.

If traffic was anarchy, then buses and trucks would be the crazy dictators battling for power. I stayed as far away as I could get from any bus or truck. The huge buses look like they just came from a demolition derby. They are this mess of twisted metal spitting out toxic fumes commanding their presence on the road. 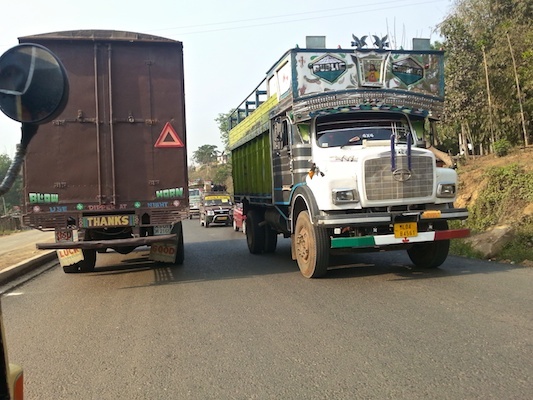 For the locals who ride the bus it's no easy journey. There are no real bus stops. People wait by the side of the road in places that look like bus stops, however when the bus comes it doesn't really stop -- you have to run to get on it most of the time. Let's just say that they aren't for people with disabilities. People are taking running leaps to get on the bus, and then getting off the bus is more of the same. If the bus actually does come to a complete stop to let people out, then it doesn't necessarily do it on the side of the road. No, that would be way too sensible and safe. Instead they let people out of the bus from the fourth lane of six lanes of traffic. Imagine if you are driving near the bus and the it has just let people out in the middle of the street -- now there are people stepping out in the middle of moving traffic that you have to watch out for... or not. Mainly those people just fend for themselves and dodge in front of cars and find narrow spaces to make it to the side of the road.

Stop lights are optional. When coming upon a red light, simply lay on the horn as you speed through the intersection (see Horn use above). I believe people run red lights in India because to sit and actually wait for a red light is excruciating. Stop lights are an exercise in patience. I once noticed a Walk /Don't Walk sign with a countdown display. I've seen these in other countries before -- they are nice as they start counting at 13 or so and you know how much time you have to cross the street. In India I saw a countdown sign starting at 200. Running that red light seems pretty good now doesn't it?

You can pass on any side of the road. This should be no surprise considering the previous rules of 'no lanes' and 'use your horn'. Overtaking on shoulders is fine, on the curves is fine, oncoming traffic is fine, and even narrowly slipping between two vehicles is fine -- and one of my personal favorites. It's simple, just drive out in the middle of the road, lay on your horn and go like hell. You don't pass with caution, you pass without caution.

The hard part about driving a rickshaw across the country was the 'go like hell' part; those little engines don't have a lot of oomph. When you are overtaking a vehicle and you find yourself playing a game of chicken as another vehicle is hurdling towards you head on, remember, size always wins in India. Unless of course you are a cow, who is the real king of the road.

If after reading this, you still feel like renting a car (or a rickshaw) and driving yourself, then you are crazy enough to maybe get by OK in Indian traffic. Good luck! 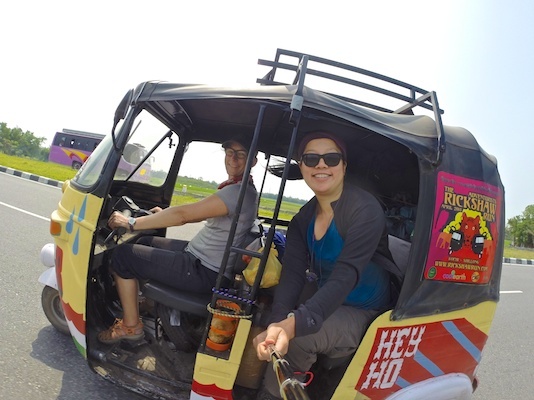