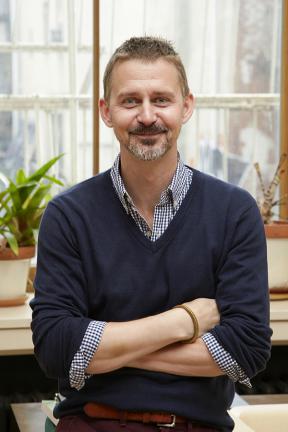 We're discussing Yates' book over tea -- English Breakfast, appropriately enough -- in one of the most gorgeous Tribeca lofts I've ever seen (which Yates and his wife, New York Post features editor Margi Conklin, are house-sitting). It's a game player's paradise complete with billiard table and pinball machine, the perfect backdrop for a conversation about manipulative storytellers and contests of strategy.

Black Chalk revolves around six students who, in 1990 at the fictional Pitt College of Oxford University, engage in a secret competition of dares and humiliations for an eventual prize of ten thousand pounds. Regulated by a mysterious trio known only as Game Soc, the challenges quickly escalate from innocuous pranks to personal embarrassments that soon cause the friends to turn on each other. Years later, one of the remaining players narrates the tale from the New York City apartment where he has taken refuge as a drug-and-drink-addled hermit still trying to atone for the damage caused by The Game... especially a young competitor's tragic death.

I mention that the story reminds me of a Hitchcock film: multiple twists and reveals, the suspenseful IV drip of information Yates doles out to the reader with a master hand, the shadowy yet intense secrets locked inside the characters while they struggle to maintain composure, the ominous atmospheres of Oxford and New York -- so seemingly opposite but equally threatening...

I liked that contrast between the hermit with his dark apartment and his [obsessive-compulsive] rituals with these eighteen-year-olds who are fresh-faced and idealistic and naïve. I wanted that same contrast in the two locations. New York and Oxford are not only on different continents, they're on different scales, they're from different periods of history. In smaller communities you rely upon your neighbors more. We don't need to rely upon our neighbors so much in New York -- cities can be so isolating.

The man knows wherefrom he speaks. Black Chalk is a deliciously devious study of human behavior ("exaggerated, but plausible") which culls directly from its creator's experiences as a law student at Oxford and as an expatriate wordsmith living on the Lower East Side. By Yates' own admission, his hermit narrator's solitude is all too real:

As a writer you really do lock yourself in a room and don't come out for a long time. I am nowhere near [the hermit's] levels. He locks himself away for three years; I might lock myself away for six hours. But because I moved to New York and didn't know anyone apart from my wife, who was at work all day, that felt like a semi-hermetic experience. Even when I went out into this enormous, busy city, I was just an observer, not a participant. If I hadn't been living here with my wife, it's entirely possible I would've not talked to anyone for very long periods of time.

While we commiserate over the writer's self-imposed exile, I marvel once again at the intricate structure of Black Chalk, the cheekily clever way Yates weaves his plotlines back and forth across time so alert readers can stay hot on his mystery trail (and if you're particularly good, you can guess the answer just a page or two before it's given to you).

Authorial manipulation, according to Yates, is part and parcel of the gig:

I put a couple of clues in [the book] just before I put the reveal in, and it's like, "Here you go, I'm giving you clues as to what the answer is going to be, and then here's the answer. Did you spot it?" I think every writer is playing games with the reader, and I want the reader to question that. Why should you trust someone who's trying deliberately to manipulate you through their words?

Intriguing inquiry. The basic goal of all writing is to entertain, inform and persuade -- in essence, feed audiences whatever knowledge you want them to have so they'll be on your side. Our hermit in Black Chalk is typing his confession so readers will understand and possibly pardon him for what happened, because The Game is the real mistake, The Game and youthful foolishness... And yet we are asked to believe a narrator who says outright that he cannot trust his own memory. Hmm. Maybe we like being manipulated by writers because then we finally have evidence of people crazier than ourselves.

The manner in which Yates documents his hermit's OCD, which the character controls with "physical mnemonics" (tangible objects and signs to remind him of required tasks, such as shoes that say WALK NOON), is a terrific example of the "exaggerated but plausible" behavior at work in Black Chalk:

I have learned to trust my routines. When I lose trust in my routines, bad things happen... Now that the [water] glasses have jolted my memory, I pick one up and head to the kitchen. Upon my arrival I see three plates lined up on the chequered linoleum floor. Which means I haven't yet eaten any breakfast... Next I find that in the kitchen sink and hindering access to the faucet there sits an inverted salad bowl. With a Pavlovian twitch I glance down, whereupon I spy my genitals. Yes, I would appear to be entirely unclothed... I would very much like to change this memory prompt...

A great deal of the reader's emotional suspense lies in learning how our narrator will conquer his fears of the outside world and rejoin society, though it may mean putting himself in danger.

Pervading the novel is an odd sense of, to use an oxymoron, hopeful paranoia. It's an extremely unique approach, skeptical and wary of the larger universe -- and sure to encourage the conspiracy theorists among us -- and yet there remains an optimism inherent in the writing that, even if we've been betrayed in the past, some proof of the world's goodness is sure to arrive any day now. We can't be certain of people's motives, but we shouldn't stop trying to relate to them.

This actually applies to the book's title, Yates informs me: "It's like there's black writing on a black chalkboard -- a set of instructions as to how to behave [with people]. You wouldn't be able to read it, but the words are still there. We've all done things and not really known why we've done them."

Before leaving, I ask Yates about plans for his next project. That will most likely be a thriller as well, but of course I can't reveal details, and the novelist isn't ready to confine himself to one master plan just yet. "I'm not sure if I would sit down for a year to write a book if I knew everything that was going to happen. I enjoy not knowing and waking up every day and finding out new stuff about my own book." Writing Black Chalk, he observes, was like playing Jenga: "It had to be carefully stacked and if I took one of the pieces out or got into just the right place, the whole plot was going to collapse."

You have to admire a man who puts such stock in the complexities of the human mind. Regardless of whether you trust the storyteller, it's a pretty sure bet he'll deliver a winning tale. 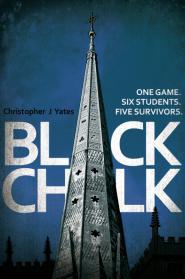