Last fall voters in Ohio voted down a ballot initiative to fully legalize the personal use of cannabis in the state. The law had many problems, primary among them the creation of a legal oligopoly favoring the companies lobbying for the bill. It's hard to say whether the ballot measure would have passed even with a more open structure since, according to Quinnipiac polling, Ohio only supports full legalization by a small margin. Legalization of medical cannabis, however, has overwhelming popular support in the state and if it had been a medical law on the ballot (without the restrictive corporate structure) it would have had a higher chance of passing. It's often lost in legalization talk that cannabis is helping patients across the country deal with a number of debilitating illnesses from cancer to multiple sclerosis to Crohn's disease to intractable epilepsy and I think we have some responsibility to think of their needs instead of holding out for the perfect legal cannabis law.

Yes, full personal use legalization would by definition give access to the widest range of patients, but it's a reality that a large chunk of voters and legislators do not support fully legal cannabis. Step by step legalization, prioritizing medical access, has worked across the country at alleviating the suffering of countless people while also providing much needed education for skeptics. It's important to push for what can pass, and then work from within that system to make people comfortable with more.

One of the consequences of the Controlled Substances Act and the resulting War on Drugs has been 40 years of misinformation about cannabis. The Just Say No campaign conflated cannabis with dangerous hard drugs like heroin and obscured the fact that cannabis has been used medically for centuries - including being listed in the U.S. Pharmacopeia by the end of the 19th century. It perpetuated negative stereotypes about cannabis users and propagated the idea that it was a gateway drug which is a stance you still hear from major public figures even though this has been widely refuted.

It's also important to note that most of the scientific study regarding not only cannabis, but also the human endocannabinoid system is still cutting edge research. The CB1 and CB2 receptors in the human body were only discovered in the 80s, and the endocannabinoids anandamide and 2-AG were discovered in the 90s. For doctors currently in their 50s this information would not have been part of their training in medical school, and instead they would have been learning the benefits of prescribing opioid medications for pain.

Now, of course, we are discovering the true dangers of opioids as over-prescription of these legal Schedule 2 substances is often cited as one of the driving factors of the current heroin epidemic. Prescription opioids themselves have a much higher potential for abuse than cannabis since it is practically impossible to die from cannabis overdose. Indeed, there's a correlation between legal medical cannabis and a 25 percent drop in prescription opioid deaths. 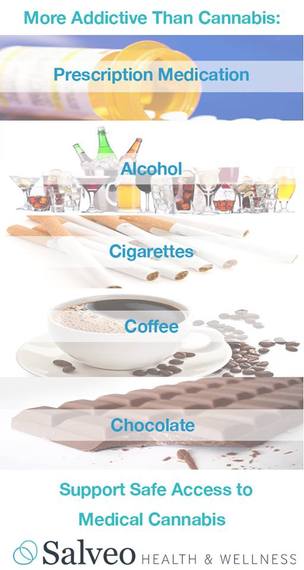 After decades of reinforced negative stereotypes and propaganda the key to legalizing cannabis lies in education, and a commitment to steadily changing peoples' attitudes. In every state in the country that has some form of legal cannabis this has meant medical legalization first, not only to give some patients some relief, but also because that's what could pass. Illinois, for example, does not have a perfect cannabis law (Americans for Safe Access gave it a D+ in the Access to Medicine category) but every day at the Salveo Health & Wellness dispensary we hear stories about how this plant has changed peoples' lives. From MS patients who were able to drop prescription medications from 14 to 3 and can now walk without a wheelchair to fibromyalgia patients who can finally make it through a full day without debilitating pain. When the medical cannabis bill was passed in 2013 only 63 percent of Illinois voters approved, but now - only months after the first dispensaries opened - that number is 82 percent in favor.

The work of hundreds of advocates, and the evidence provided daily when safe medical cannabis was made available, led to full legalization in Colorado, Washington State, Oregon, and Alaska. California has had legal medical cannabis for twenty years and is only this year likely to pass full legalization. Children are dying without access to a medication that was recently proven to produce results in a clinical trial. Sometimes change takes time and we owe it to patients to give them as much time with cannabis as possible - even if that means only legalizing it for them at first.