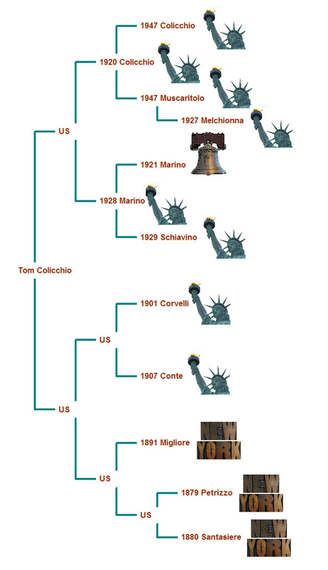 Immigrant Snapshot of the Family Tree of Thomas Patrick Colicchio

Six of my eight great-grandparents were immigrants so I thought I had Ellis Island bragging rights. Even though 40 percent of Americans have Ellis Island heritage, I figured there couldn't be many who had more ancestors who took their first steps on American soil at this famed immigration station, but celebrity chef, restaurateur, and Top Chef judge Tom Colicchio has me beat.

I've attempted here to encapsulate his family's entire off-the-boat experience in a single illustration. Each arrival is recorded by surname and year of entry, with a Statue of Liberty icon indicating Ellis Island, a Liberty Bell representing Philadelphia, and a wooden sign designating New York before Ellis Island opened its doors on January 1, 1892. "US" simply means that the individual was born in the United States.

If you take a close look, all the following can be gleaned from this graphic: