Not far across the riverine border from St. Louis there is a place where all your witches come true....Alton, Illinois, sometimes called the most haunted town in America. Many blame the limestone rock and the Mississippi River water for so much paranormal activity here. The rock holds the energy, the water retains the psychic residue of dramatic events of the past. It is indeed, I find, a spirited place.

I begin by visiting The McPike Mansion, built in 1869 in the Italianate-Victorian style, obviously once grand, but now looking sinister and derelict. Like all good haunted houses, it hovers atop a hill surrounded by large gnarled oak trees. There are broken windows with little fragments in the jambs, like transparent teeth. There is an iron fence; a graveyard in the back; and a nimiety of ghosts. Nylon camp tents are scattered about the front yard, a little Resurrection City. 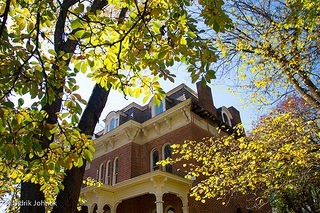 I arrive to find an old Ford truck with a Ghostbusters logo parked in the driveway. There is a sign on its side: "Paranormal Investigation On-Site Vehicle," festooned with a pumpkin cutout, colored Christmas light strung along the top, and plastic skulls attached to the bow. Its owner, Jerome Minkes, introduces himself as a "paranormal investigator," a popular occupation in this town. With a demeanor that might be colored indigo, he sets about explaining some things to me: "Our energy after we pass, after our physical body dies, what we were in life becomes a ball of energy. And usually that can be recorded because it gives off a phosphorescent glow, and I have recorded many of them here."

The place is falling apart. There are 16 rooms, 11 marble fireplaces, carved stairway banisters and a vaulted wine cellar, but everything broods, as though remembering a former glory. It was long abandoned, but in 1994, Sharyn and George Luedke picked up the place in auction for a song (not Ray Parker, Jr.'s) Their dream was to restore it, then turn it into a B&B. But it has turned out to be a more expensive enterprise than imagined, and going has been slow. To help finance the restoration the Luedke's hold ghost tours, and overnight campouts in the front yard.

When the Luedke's first bought the mansion they didn't know it was haunted. Six weeks after closing Sharyn was tending plants in the front yard and looked up to see a man in a striped shirt and tie standing in the window looking back at her. After a moment, he disappeared. Then, after researching the history of the building, Sharyn came across a photograph of Paul Laichinger, the original owner, wearing the same outfit.

Visitors see figures throughout the house. Many have the sensation of being touched by an invisible presence. Sounds of footsteps are heard pacing up and down hallways, and down the staircases. Objects vanish only to materialize in other parts of the house.

I wander about, hieing past yellow caution tape, ducking beneath hanging wires, touching the cool walls, and feeling a bit spooked. But I don't see any hard evidence of haunt.

Once back outside I confront Jerome: "Do you really think this place is haunted?"
He stiffens up a bit, and then says: "In all my years working at this location I have caught enough information to proclaim that yes, this McPike Mansion is definitely haunted."

From McPike I head downtown, to the most haunted building in Alton, the century-old Mineral Springs Hotel. This place is landlord to so many ghosts, it's like an almanac of spirits, a real Boos Who. But the spirit I meet is Cassandra.

Cassandra was a ten-year-old girl who drowned during her birthday party in the basement swimming pool, once the largest in Illinois. Cassandra was running in play and slipped and hit her head and fatally fell into the water. Ever since visitors have heard her screams, have watched her roll marbles, and have witnessed tiny wet footprints appearing by the pool.

Brandon Klein from the Gateway Paranormal Team is a happy medium. He uses a hand-held ghost hunters tracker ...it detects the electromagnetic energy of spirits...to see if Cassandra is around. After calling to her, the lights on the device begin to flash.

Jasper, my seven-year-old son, seems to connect with Cassandra and they start to communicate. He talks to her, and seems to hear her response. He shakes her hand. And, after a spell, he says out loud, "I love you Cassandra," and the lights on the device begin to flash rapidly. Jasper has become a ghoul's best friend.

"She's using too much energy!" Brandon cries. There are half a dozen of us on this tour. We aim all our cameras, all our lights and recorders in her direction, and then...suddenly all our devices go dead...and the room goes dark. Cassandra sucked all the energy from our batteries.

"Who ghost there?" someone asks.

Is this for real?

Come to Alton and see, or feel, for yourself.