Last week, I was at the California State Capitol in Sacramento and came across one of the most eye-opening scenes I've ever witnessed.

As I walked up the front of the building, I could see commotion on the south steps of the building and as I got closer, the picture became clear. Someone had printed out life-size cutouts and covered them in corporate and union logos. These cutouts covered the entire steps from left to right.

After asking someone there, I found out these cutouts weren't just random people, they were the 120 members of the California Legislature and those logos covering their bodies, weren't selected at random. They were custom placed based on which company or union had contributed to each individual politician. 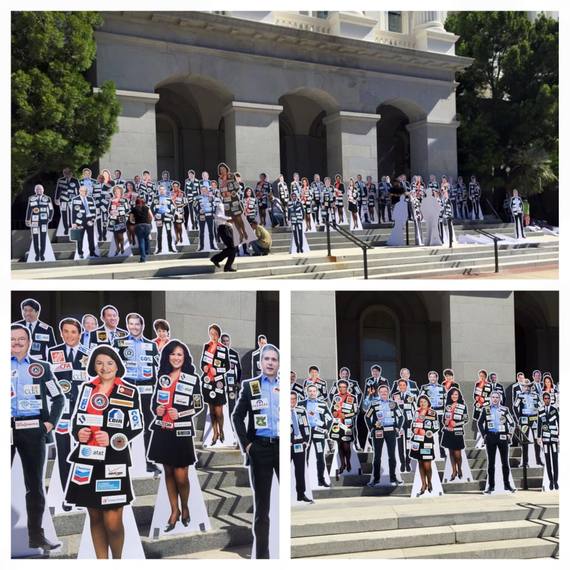 The idea has come up before, back in 2013 a group filed a We the People petition which called for Politicians to wear their donors' logos on their jackets similar to a Nascar driver. The petition didn't meet the 100,000 signature requirement, but the idea did cause quite a stir in the media.

The idea is based on a simple concept: big money has a lot of control in politics. If you ask people on the street, this is what they will tell you. It's sad to say, but it's very true. Corporations and unions contribute massive sums of money to politicians, to the sum of hundreds of millions of dollars each year. 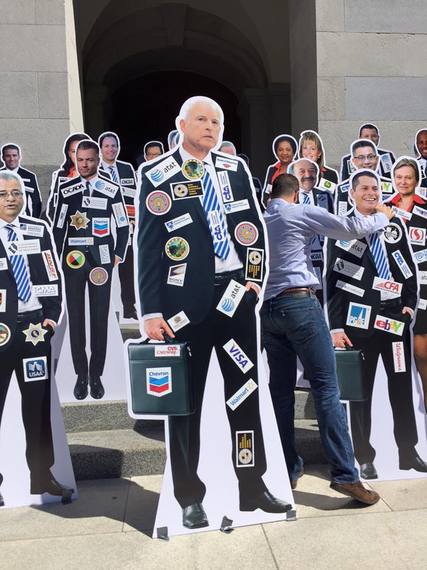 As I sat there, mesmerized by the cutouts, I couldn't help but wonder. What did 7-11 ask for in exchange for their contribution? What about Walmart? AT&T? I sat there for nearly 30 minutes, going from cutout to cutout asking myself how that transaction would have taken place.

I then began to think how upset these politicians must be that day having been outed by this protest group. Turns out, I was very wrong. I heard more commotion and looked over as one of the senators of California, Bob Hertzberg approached the cutouts. Thinking I could potentially catch his outrage on camera, I began recording. I was shocked to see I was once again wrong.

He laughed hysterically and ran up to get his picture taken with his cutout. I was blown away that someone being called out for taking big money from corporations and unions would find it to be so funny.

Here is the clip I shot of Bob Hertzberg. If you hired an actor and asked him to play a greedy politician and let out a loud obnoxious laugh, he couldn't have done as good a job as this guy.

Despite this nascar-themed concept being discussed for years, the fresh approach taken here deserves some recognition. I came to find out the idea was lead by a San Diego Entrepreneur named John H. Cox who is known for his anti-corruption initiative Neighborhood Legislature which calls for breaking up the massive state of California into smaller districts with each district having their own representative.

From my conversations I had with him briefly at the protest, this would mean adding over 12,000 representatives to California, each representing their own Neighborhood which he believes will end this type of big money corruption in the state.

While the idea sounds far fetched, a short conversation with him shows he's not messing around and means business. He comes across very aggressive, almost like Donald Trump but instead of immigration, he nearly yells until he is red in the face about taking California back from greedy unions, corporations, and politicians.

Even if it doesn't happen, I think this protest will kickstart a movement from others on the state and federal level doing the same thing, shedding light on the fact that big money owns politics and if we want to take back control, we need to make sure everyone in our country understands just how serious the problem is.