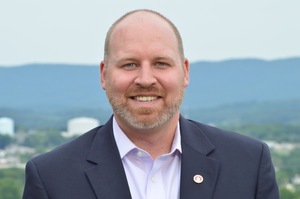 Kai Degner, author of this post, is the Democratic candidate for the U.S. House of Representatives in Virginia's 6th congressional district (Shenandoah Valley, Roanoke, & Lynchburg). His opponent is 24-yr incumbent Bob Goodlatte, who is Chair of the Judiciary Committee.

Here is my claim: I am running in the most important anti-obstruction race in the United States. My opponent is not just one of a group of obstructionist legislators, he is personally responsible for killing bills in his Judiciary Committee related to any number of issues important to the majority of Americans.

But, because my opponent is a master at going unnoticed during his 24 years in office and safely gets re-elected, most Americans don't understand Rep. Bob Goodlatte's unique role in our dysfunctional, partisan, and out-of-touch congress.

To boot, rather than focusing on solutions, he is leading the partisan effort to bring perjury charges against Hillary Clinton and serves as an advisor to the Trump campaign. His now dogged and unwavering support of Donald Trump exposes his allegiance to the Republican Party establishment rather than to the Constitution and his constituents.

A Selection of Bob Goodlatte's Obstruction
Let me share just a few examples of where Goodlatte is out of touch with voters and America.

He delayed and weakened 9/11 first responder funding. He stops all immigration reform policies, thus enabling the status quo that is frustrating so many of us. He does not believe there is any threat to voting rights in America. He voted yes on making the Patriot Act permanent. Of course, he voted for the Iraq War - and then continually votes to cut funding for veteran programs and benefits. He voted against reauthorizing the Violence Against Women Act, partially because it would extend the protections to gays and immigrants. He voted no on ending job discrimination based on sexual orientation. He is one of the biggest recipients of NRA contributions, and blocks any reasonable attempt to mitigate gun violence.

He does not believe marijuana has ANY health benefits AT ALL and keeps cannabis a Schedule 1 Narcotic. This enforces cruel and usual punishment mainly suffered by the poor and black; fills for-profit prisons; keeps necessary medicine from children, veterans, and others; gives gangs a way to cash-flow their operations; contributes to the opioid epidemic; and keeps government in the way of business, jobs, and research. Meanwhile, the hemp economy is dormant, keeping agriculture, manufacturing, and retail sectors from capitalizing on the potential of this plant.

He killed the Marketplace Fairness Act, after it passed the Senate, and thus continues the advantage online retailers have over local retail business - and caused Virginia to raise the gas tax.

His National Environmental Scorecard in 2015 was 0%, down from 3% in 2014. Since 1993, he has consistently voted against environmental protections (think family health, clean water, and strong economies), and for fracking, fossil fuels, and pollution. He votes no on reducing carbon emissions, and has no commitment to mitigating climate change.

I could go on about issues, but let me switch to the fundamentals: campaign finance and government reform.

Bob Goodlatte does not support the government reform he campaigned for.
In 1992, Bob Goodlatte won the right to represent voters in Virginia's 6th congressional district with a campaign based around his promise to serve only 6 terms (12 years). Now in 2016, he is seeking his 13th term (years 25 and 26). Given the district is so reliably conservative, the argument that he needs to protect the seat for Republicans is bogus, and proves that he's more concerned about his own power and influence than for ensuring our officials are not career politicians bought by corporate and special interests.

Who is Kai Degner?
On June 8th, 2016, after one candidate had to discontinue his race, I unexpectedly became the Democratic candidate to run against Bob Goodlatte. I am in my 8th year on Harrisonburg's city council, and served as mayor from 2009-10. I am a small business owner and real estate agent, having previously worked for nonprofits and as an environmental consultant out of college. My most consistent work is in the realm of community dialogue and listening skills training, and I have facilitated and convened over 300 forums, debates, and panels on a variety of issues.

At heart, I am a community organizer and entrepreneur who believes people participating in honest processes can lead to achieving the values espoused by our Constitution: justice, peace, and equal opportunity. As part of my campaign, I am hosting five citizen assemblies based on areas where there is work to do for us to become a more perfect union: justice, economy, representation, preservation, and equality.

Can I win?
I believe I can win through a multi-partisan coalition of people frustrated with a dysfunction congress who understand that Bob Goodlatte is a unique part of the problem and must be replaced. Trump voters, of which there are many in this district, just rejected establishment career politicians in the primary and are clearly frustrated with elected officials who simply toe a party line.

With funding for an advertising campaign, I can bring attention to the truth: Trump voters are frustrated with exactly what Bob Goodlatte represents. If that message can permeate a generation's habit of voting for Goodlatte, I win. But, I need the funds to communicate that message so voters in the district understand the connection between their frustrations and Goodlatte.

I am not rich. I am not funded by PACs. I am not years into preparing to run congress. But, I am 100% committed to this race and do believe I - WE - can win. Between early June and late August, I raised about $70,000 and will get back on the phone as soon as I publish this post. I need to quadruple my fundraising to have any chance of introducing myself to enough voters in this district.

How You Help: Donate and Share the Importance of this Race

I am proud my support is overwhelmingly coming from inside the district, but anyone in American wanting to see progress on government reform, criminal justice reform, the drug war, immigration, and civil rights should understand this race is perhaps the most important congressional race in the nation.

You can donate to this race and bring attention to its importance to these issues.

Share this race with national advocacy organizations who care about progress on these important issues.

See my Visions for Action