Okay, there's probably a few of you who don't see any fiscal charts on a typical day. I salute you.

But here, we're obsessed with a question David Wessel tackles in today's Wall Street Journal: is the recent slowing of health care costs cyclical or structural? Or, more likely, how much of each? And does it have anything to do with health care reform? (See here and links therein.)

But first, why am I casting this in fiscal terms -- isn't that the stuff of taxes and transfers and this the stuff of health care affordability? It's because pretty much every discussion about achieving a sustainable budget deficit goes like this: "In the near term, we need tax reform that doesn't just cut spending but also raises new revenues. But after that, it's all about health care spending... if we don't slow its growth, we're toast no matter what we do on the tax side."

In fact, we now spend the same share of GDP on health care -- 18% (and rising) -- than the historical average of federal taxes collected, and half of health care spending is public spending. So that's why I dub this a fiscal discussion.

The top chart (see below) actually shows a steady downward trend in the rate of cost growth, with what might be cyclical humps in there, though it's hard to tell because this is a five-year moving average. The bottom chart clearly shows sectoral slowing over the past few decades, except in hospitals (which represent the largest single component, accounting for about one-third of total health expenditures).

Parsing out what's recessionary and what's likely to stick as the economy climbs back is the question. As one source summarizes it, "This [slowing of health spending] has gone on longer than anyone expected, though the [economic] downturn has too."

David Cutler, a health economist who's been taking the temperature of these trends for a while now, breaks it down like this:

He attributes about a third of the slowdown to the transitory impact of the recession, and another dollop to recent cuts in government payment rates to providers and to the drug industry's inability to find pricey new drugs to replace the revenue from generics.

But Mr. Cutler speculates a significant part of the slowdown reflects changes in consumer and provider behavior that will persist. Americans are using less health care because they are being forced to pay more out of pocket. Indeed, the share of insured workers with deductibles of $1,000 or more rose to 31% in 2011 from 18% in 2008, Kaiser estimates. "A lot of people are saying: Do I really need this?" Mr. Cutler says, who notes a distinct slowing in the pace of spending on CT scans, MRIs and other imaging.

At the same time, he says, doctors and hospitals--prodded by employers and government--are changing the way they deliver health care, partly in anticipation of some features of the Obama law, such as penalties for hospital-caused infections.

Such developments strike me as potentially lasting, and they represent a reasonable mix of individual economic incentives and broader regulation of the sector. But we'll have to see now, won't we?

Final point. I've been remiss of late in writing less about the persistent jobs gap that remains our biggest near-term challenge. I haven't forgotten about it at all, though I'm frustrated by policymakers' inability to do squat to help ameliorate it. I'll get back to it, of course, but in the Zen Buddhist economics I try to practice, it's all connected anyway. So, when nudging the FHFA to get moving on principal reduction, I'm also advocating faster, healthier deleveraging that would ultimately boost consumption and job growth.

And in advocating bending the health care cost curve, I'm thinking a lot about the huge boost this gave to job growth the last time it happened in the mid-1990s. Economic theory, by the way, says that's not supposed to happen, since employer health spending and wages are fungible in the compensation package. But I'm pretty sure the theory's quite wrong about this, especially in the near term.

So, really, I've always got jobs in the back of my mind. Of course, we need less jobs in the mind and more in the labor market. 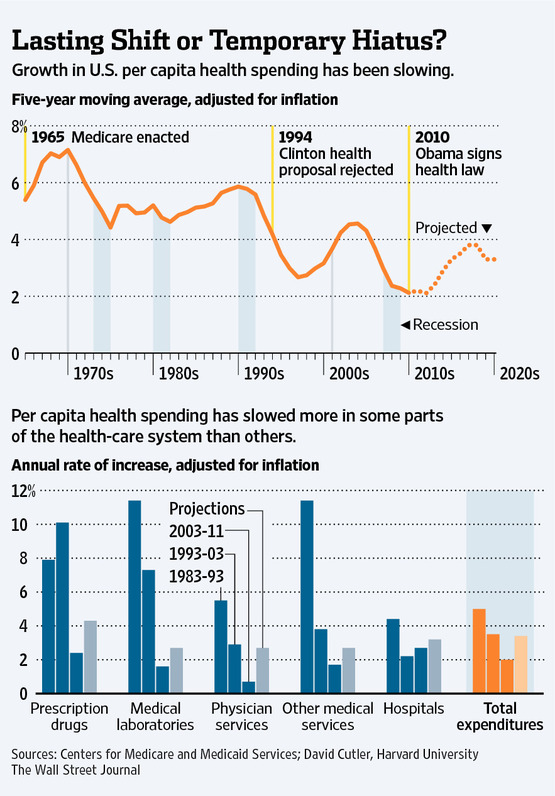