Some places stay with you long after you are gone. While they may not necessarily have the most pleasant weather or the best food, they've got something else, a certain indefinable quality that makes them hard to forget. They're full of adventure waiting to happen, and secrets waiting to be discovered. They keep you guessing. They're exciting and unpredictable. They are, in short, The Most Interesting Cities in America.

I don't always need a Mortgage Calculator, but when I do, I prefer this one.

Factors
In honor of Jonathan Goldsmith (who celebrated his 76 birthday in September), we sought to determine which U.S. cities are most interesting. To do so, we collected data on the 200 largest cities and rated them according to the following four factors.

Diversity. We applied a variation of the Hirfindahl-Hirschman index, commonly used in economics to analyze market power, to demographic data from the 2010 Census. The results, which range from 0 to 1, approximate the likelihood that any two people picked at random from the population will be of a different race, so a larger number indicates a more diverse population.

Population Growth. An interesting city should be a place of constant change. A steady flow of new residents means that there are new ideas and perspectives entering the community every day, and new opportunities for restaurants and shops to open or expand.

Data on bars per 10,000 residents comes from the 2012 Census Business Patterns Survey, and includes all "drinking establishments," - bars, taverns, cocktail lounges and nightclubs. Data on the number of artists, writers, musicians and accountants comes from the Bureau of Labor Statistics 2013 occupation and employment survey. Data on population growth comes from the Census Bureau and is based on population estimates from June 2012 and June 2013. 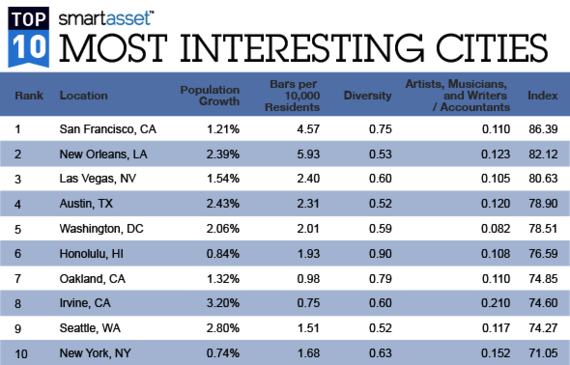 The Most Interesting City in America has long been recognized as one of the most unique places in the world. From the high towers of the Golden Gate Bridge to the rocky walls of Alcatraz; from the twin peaks in the heart of the city to the clanging downtown cable cars; the landscape of San Francisco is as legendary as it is beautiful. There is more to this city than a handful of nice attractions, however. Some will be surprised to learn, for example, that San Francisco is among the most diverse cities in the country--sixth out of the 200 cities we examined. It is also one of the booziest. San Francisco rated second on our list for bars per 10,000 residents.

La Nouvelle-Orléans. A city filled with magic and rich with history, its mix of cultural influences are as unique as they are interesting, ranging from Spanish Creole, to French, to American South. That cultural heritage becomes twice as interesting when accompanied by a drink: on New Orleans's Bourbon Street, bars often stay open around the clock, and its legal to take alcohol into the street in a "to-go" cup. Plus, with nearly six drinking establishments for every 10,000 residents, New Orleans is the only city that has a greater concentration of bars than San Francisco. Another Sazerac please!

Taking a walk down the Vegas strip at night is like passing through someone else's dream. The incredible skyline, which includes a miniature Egyptian pyramid, a mock Eiffel tower, and a replica Statue of Liberty, reflects the grand aspirations that have built this city. That same type of hope brings hordes of new-comers and tourists alike every year, each of them looking for a little Vegas magic.

There's a lot going on in Austin. It is the capital of the second most populace state in the country. It is home to the largest public university in the country. Each year it plays host to several of the nation's most significant arts festivals, including Austin City Limits and South by Southwest. While this may be too much action for the faint of heart, many outsiders are finding Austin's pull irresistible: a population growth rate of 2.4% make Austin the 10 most rapidly growing city in our study.

Fifteen Fastest-Growing Cities in the U.S.

One of only two East Coast cities to crack the top ten, the nation's capital is a city at once filled with history and ripe with opportunity. Landmarks such as the National Mall, the Lincoln Memorial and the Washington Monument belie a city that is anything but stuck in the past. The District is a destination for many of the country's most ambitious and energetic individuals, people who hope to reshape the very future of a nation.

Is it better to buy or rent?

Sitting between the Americas and Asia, Honolulu has throughout its history served as an intercontinental hub, a place where cultures from across the world intersect and blend. It should come as no surprise, then, that Honolulu rated as the number one most diverse city in America. While travelers may flock to the city for its beaches, the true excitement lies inland, in neighborhoods such as Makiki, Chinatown or the Arts District.

The population of Oakland ranked in our analysis as the second most diverse in the country, behind only Honolulu. That diversity has contributed to Oakland's deserved reputation as a cultural capital: it claims among its current and former residents Oscar-winners (Clint Eastwood, Tom Hanks), musicians (Billy Joe Armstrong, Keyshia Cole), influential writers (Daniel Alarcon, Jack London) and even the inventor of the popsicle (Frank Epperson).

Located along the Pacific Ocean in Orange County, Irvine was one of several cities in the greater Los Angeles metropolitan area to score well. While the LA area is a well-established haven for musicians and artists, Irvine benefitted from having the fifth highest population growth rate of any city we examined. Indeed, if Irvine continues growing at its current rate of 3.2%, the population will double in just over two decades.

The Pacific Northwest, and Seattle in particular, have always attracted interesting, and some might say eccentric people, and many cultural movements have emerged from the region over the years. Today's Seattle is less grunge and more tech, but that doesn't make the Emerald City any less appealing to outsiders: Seattle ranked 6 on our list for population growth.

Rounding out the top ten is the City That Never Sleeps. Like many of the cities in the top ten, New York is known as a destination for immigrants the world over. The numbers, however, suggest that the Big Apple is losing its appeal: New York's growth rate of 0.74% didn't crack the top 100 of the cities we included in our study. Nonetheless, a stroll through Times Square is enough to remind anyone that NYC--like all of the cities on this list--is among the most interesting places in the world.

1. Disclaimer. SmartAsset categorically does not think accountants are boring. We love accountants. We love their good sense. The calm they exude in the presence of spreadsheets. In fact, SmartAsset has several accountants of our own, and we love each and every one of them!

2. In several instances, we combined places that, while technically separate municipalities, are for all intents and purposes one city--for example, we combined Las Vegas with North Las Vegas and Henderson.