Who is the most overrated player in the NBA?

To answer this question, we need to first define what we mean by "overrated". Dictionary.com tells us that the word "overrated" means: to rate or appraise too highly; overestimate.

The word "high" is a relative term. To argue that something is "too high" or "too low" requires a reference point. Actually, to be precise, you need two points of reference.

Batting average has been calculated in baseball since the 19th century and it remains the most cited measure of a hitter's effectiveness (one only needs to watch a baseball game on TV to see this point). When we turn to basketball, the "batting average statistic" (i.e. oldest and most cited) is points scored per game (PPG).

As we note in The Wages of Wins and in Stumbling on Wins, this single metric does a remarkably good job of explaining the player evaluations of the coaches (i.e. allocation of minutes, voting for the All-Rookie team), general managers (i.e. free agent salaries), and the sports media (i.e. voting for MVP). And just like batting average, PPG is obviously not a perfect measure.

Focusing just on scoring ignores other factors that contribute to wins (such as shooting efficiency, rebounds, turnovers, steals, etc...). Scoring totals can also be inflated with more minutes and/or more shot attempts (a fact players certainly understand). In other words, lofty scoring totals may not coincide with scoring efficiency. Despite these shortcomings, PPG still dominates the discussion of a basketball player's value.

Although scoring totals often coincide with perceptions of a player's value, scoring alone does a poor job of capturing a player's overall contribution to wins. In contrast, Wins Produced (a measure of performance detailed in The Wages of Wins and in Stumbling on Wins) does connect a player's statistical production to wins. And with these two measures in hand, we can look at the most overrated scorers in the NBA in 2009-10.

Last season, 129 players logged at least 2,000 minutes in the regular season. These players were ranked in terms of PPG and Wins Produced. For example, here are the top ten scorers -- with PPG reported for each player -- from 2009-10:

When we consider all of these player's statistics we see that most of the players were well above average in terms of their impact on wins. In fact, LeBron James -- who produced 27.2 wins last season -- was the most productive player in the game. And Kevin Durant -- with 19.7 wins produced -- ranked third in overall productivity.

Most, though, is not all. Three players -- Carmelo Anthony (6.0 wins Produced), Monta Ellis (1.9 wins Produced), and Danny Granger (3.8 wins produced) -- are what we call "unproductive scorers." Yes, each player can score. But once again, a player primarily impacts wins by shooting efficiently and taking actions that get and keep possession of the ball (i.e. rebounds, steals, and avoiding turnovers). And when we consider the factors that dictate wins, we see that Anthony, Ellis, and Granger come up short. In sum, each is overrated.

In fact, one of these players was the most overrated scorer in the NBA last season. To identify this player, the wins produced rankings were compared to the scoring rankings. The players with the largest positive difference were considered the most overrated. And topping the list of the fifteen most overrated -- as the following table indicates -- is Monta Ellis. 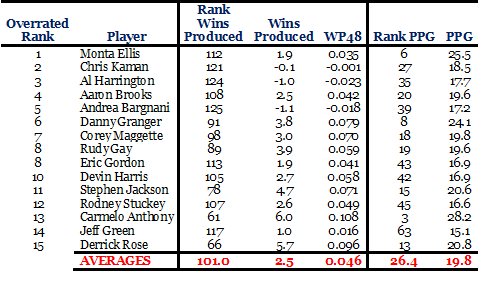 Ellis ranked 6th in scoring (out of the 129 players examined). But his production of wins only ranked 112th in our sample.

The problem for Ellis is familiar. Although he is a prolific scorer, this is primarily because he is prolific with respect to shot attempts. For a shooting guard, he is below average with respect to shooting efficiency and rebounds. Consequently, his efforts as a scorer are not quite as helpful as his scoring totals would suggest.

Ellis was not the only "unhelpful" scorer. Anthony and Granger also appear on our list. And Rudy Gay -- who signed an $82 million extension this summer -- is 8th on the list.

Both Granger and Gay are playing for Team USA this summer. Also appearing on this roster are Derrick Rose and Eric Gordon. Each of these players was selected because they can score. But once again, these players are simply not quite as productive as their scoring totals suggest.

Of course, fans of these players will object to the overrated designation. After all, many NBA fans are not different from coaches, general managers, and the sports media. But scoring totals simply do not capture accurately a player's contribution to wins. And although players are not always rewarded for doing more, teams don't win much when players respond strictly to the incentives given to them by fans and decision-makers in the NBA.

For two more perspectives on the Most Overrated (perspectives that consider NBA Efficiency and the Player Efficiency Rating), one is referred to an extensive discussion at The Wages of Wins Journal.