It's apparently very profitable to do someone else's books, lease out their property or rent out their autos.

Accounting/bookkeeping firms, commercial/residential real estate leasing companies and auto rental/leasing companies lead the way when it comes to squeezing the most profit out of revenue, according to the latest ranking of most profitable industries by Sageworks, a financial information company.

Companies in these three do-it-for-you industries generate net profit margins, on average, that exceed 15 percent, which is more than twice the average for all industries, according to Sageworks' financial statement analysis of privately held companies. In other words, for every dollar of sales received, these companies are producing at least 15 cents in profit.

Accounting, tax preparation, bookkeeping and payroll services firms generated an average net profit margin of 19.6 percent. This industry includes not only offices of Certified Public Accountants and tax preparers, who typically generate even higher margins than the category average, but also firms providing back office services such as payroll and financial records.

Lessors of real estate (including commercial and residential properties) and companies that rent or lease cars, trucks and recreational vehicles posted industry margins of about 16 percent during the same period.

Also making Sageworks' ranking of the most profitable industries in the U.S. were offices of dentists, physicians, legal services and real estate brokers/agents. These industries had net profit margins of between 13 and 15 percent, compared with a 7.3 percent margin among companies across all industries.

Many of the industries were repeats from previous years' rankings. For example, firms that provide accounting, tax preparation, bookkeeping and payroll services have been atop the list for the last several years.

"We update this list annually, and we almost always see certain industries at the top of the list," said Sageworks analyst James Noe. "Some businesses tend to have healthier bottom lines by the very nature of the industries that they operate in."

For example, several of the industries have consistent demand for their specialized, premium-priced services. At the same time, these service industries don't have to spend a lot each year on equipment or tools, which helps contain costs.

Industries that dropped off the top 15 list from last year included oil and gas extraction companies, funeral homes and support activities for mining. A separate analysis by Sageworks found that margins for oil and gas producers have dropped sharply from a year earlier amid falling oil prices.

Design services, consulting firms and auto equipment leasing companies were new to the ranking this year.

The ranking is based on private-company financial statements filed over the 12 months ended Aug. 27. Net profit margin has been adjusted to exclude taxes and include owner compensation in excess of their market-rate salaries -- adjustments commonly made to private-company financials in order to provide a more accurate picture of the companies' operational performance.

Noe also said that private companies are performing very well overall; the average U.S. company is generating strong margins and increasing sales. Private companies are growing revenues at nearly a double-digit rate year over year for one of the healthiest average sales growth rates of the past 10 years, and the average net profit margin is at a five-year high.

"These companies don't typically grab the headlines, but their performance is crucial for the overall health of the U.S. economy, as privately held companies drive the bulk of GDP and job creation in the U.S.," Noe said.

Indeed, Census Bureau data show that 94 percent of the roughly 128,000 accounting, tax preparation, bookkeeping and payroll firms in the U.S. have fewer than 50 employees. And that doesn't count the nearly 400,000 firms that have no employees.

A healthy bottom line allows these businesses to expand, reinvest in their businesses and take on extra overhead such as new hires, Noe said.

"A healthy net margin for the average U.S. business is a very good thing for the U.S. economy," he said. 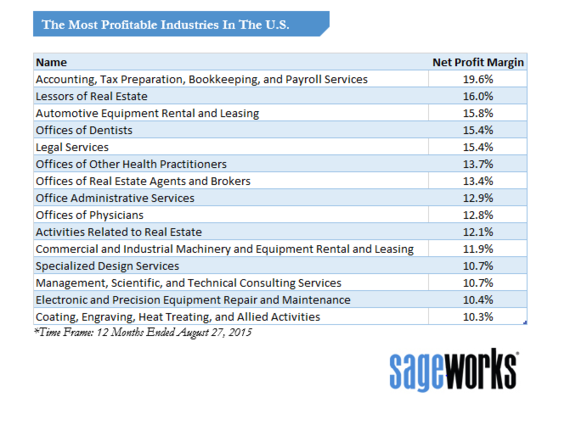