Which of the 28 countries in the European Union has the most citizens living abroad as immigrants? 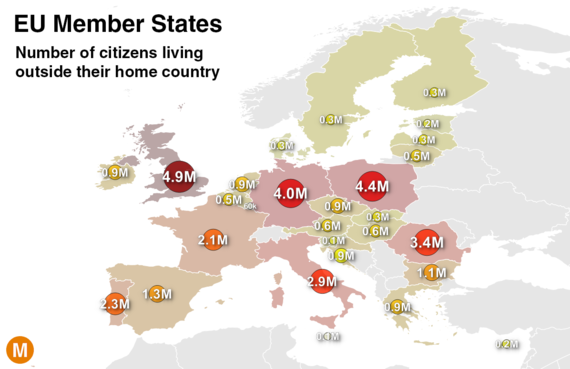 
While the U.K. takes the drastic measure of approving the Brexit to stop the flow of foreign immigrants, the fact that 4.9 million of its own citizens are living as immigrants in other countries goes completely unmentioned.

For that matter, when was the last time you even heard the term "immigrant" used in connection with U.K. citizens, or citizens of any developed western country? Instead, we call them "expats," a word which carries very different connotations, but means basically the same thing. Here is how Wikipedia defines them (immigrant, expatriate).

An immigrant is a person who moves to another country.

An expatriate (often shortened to expat) is a person temporarily or permanently residing, as an immigrant, in a country other than that of their citizenship.

In theory, the definitions are essentially the same. But in practice, there is almost no overlap.

I spent a few years working in London, along with several other Americans, some of whom are still there. And never did I think of myself as an immigrant or hear any of my fellow expats described as immigrants. Likewise, immigration may be the single most discussed topic in this year's U.S. presidential election, but not once have I heard Mexican workers living in the U.S. described as expats.

The fact that we have two different terms, one for rich countries and one for poor countries, is just one clear illustration of how silly our way of talking about immigration is here in the West.

Where are the facts?


As discussed in a previous post, public opinion about immigration has become a deciding factor in some of the most important geopolitical events in the world.

Views on immigration have shaped the world's response to the refugee crisis, our policies on the war on terror, and this year's U.S. presidential race. Yet, the basic facts about immigration almost never come up at all in the debate.

How well do us westerners know the basic facts about immigration? Here's what a study by IPSOS has to say.


For such a fundamental question, developed countries around the world are terribly misinformed. U.K citizens believe the number to be twice as high as reality. The average American overestimates the immigrant population by an even larger amount.


One of the major concerns around immigration is the risk of terrorism by Islamic extremists. How well do countries know the size of their Muslim populations?

What these numbers mean


A few months ago I posted another "perceptions-vs-reality" graphic (Support for ISIS in the Muslim World), which some people misunderstood to be an argument for a particular political view. So in this case, I want to make sure I don't send any wrong messages about what my point in all this is.

Do these numbers mean the U.K. is wrong to leave the E.U.?

No. Personally, I really don't know whether the U.K. made the right decision or not. Maybe U.K. voters would feel the same regardless of anything mentioned here.

What these numbers do highlight is the silly way we talk about immigration here in the West.

If "too many immigrants" is going to be our reason for making important decisions (and who knows, maybe it should be), "how many immigrants are there?" is a question we should be able to answer. And before taking measures to stop immigration, we should be brave enough to acknowledge we also have countrymen who live abroad and benefit from the immigration policies of other countries.

To learn more about immigration, see: All the World's Immigration, Visualized in One Map