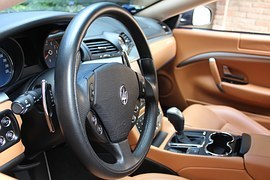 I'm teaching my 16-year-old to drive. We go out in the evenings after work for about an hour at a clip. I try to keep my voice modulated to hide the terror. "Move a little to the left," I'll say, "so we don't take out the row of mailboxes," I silently add. At other times, I may casually mention "there's a car parked on the right," knowing that, without my sage and timely guidance, he'd proceed to ram it while maintaining his constant speed. For his part, my son is kind enough not to roll his eyes when I point out the obvious.

I realized something the other night -- in the lulls between the heart-pounding terror and the somewhat distracting thigh tremor that has become my constant companion from pressing on my invisible passenger side brake.

I realized that teaching my son to drive was, perhaps, the last, great lesson it is within me to teach him. Other lessons are constant and shown more (I hope) by example - respect for others, courtesy, diligence, the imperative of constant curiosity, patience on occasion, as well as the benefits of urgency. Those lessons aren't so much mine to teach as they are his to learn. Driving, however, is something, and perhaps the last thing, that I get to sit beside him and actively instruct.

The laws of Pennsylvania require that aspiring drivers accumulate a set number of hours behind the wheel, a good portion of which must be at night and in inclement weather, before they qualify to take their drivers' test. It's a well thought out requirement intended to make new drivers comfortable in the everyday and able to face the challenges of adversity when they inevitably come.

So I was thinking, as I sat down to write this post and after my thigh stopped quivering, why don't more companies approach management and leadership in the same way? I talk to many executives who yearn to spend less time at work or to spend more time focused on something other than that which now occupies most of their days.

These executives know they have to train their replacement. If asked, they can often name a handful of up-and-comers within their organizations that they "have their eye on." Unfortunately, the reality is that these up-and-comers, while possessing great skills, are currently untrained. Worse, the chances are that they won't be any better equipped when the time comes to take their place at the helm. True, the up-and-comers may learn from each position they occupy on their way up, but when the time comes (if it ever does) to sit behind the big desk, everything will be new. They've been trained to drive by spending increasing amounts of time in the passenger seat.

Every parent knows, and all state laws reflect, that a person can only learn driving by driving. But too few companies train the next generation of leaders the same way. Think about what will constitute the everyday life of your replacement? What are the decisions, action items, and meetings likely to fill up her day? As for budgets, what is the context in which she will have to view each line item in order to understand what the numbers are saying?

If the lifeblood of your organization is its people, what are the relationships that must be nurtured each and every day in order to keep the organization humming? What about adversity? What kind of storms appear on the horizon for which you have to prepare well in advance, and where is the shelter? Now ask yourself: do you really want your replacement to figure out the vital parts of her job the first time she is confronted by them?

Stephen King once said "if you're a writer, write. It's the only way to master your craft." Think about your up and coming leaders - those people you have your eye on. Perhaps, in 2016, instead of just making sure they get the front passenger seat, you can figure out a way to give them time behind the wheel.

Just make sure to keep your voice well-modulated, be judicious in what remains unsaid, and don't let them see how often you press down on the invisible brake.